At the University of Texas, the reeducation of a deviationist continues. 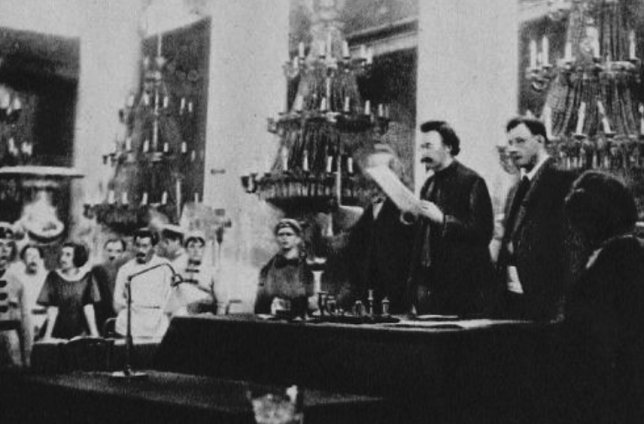 This article originally appeared in American Spectator, May 18, 2018.

An Antifa group took its call for “revolutionary violence” against the University of Texas at Austin’s Robert L. Reece to the next level by scheduling a Maoist-style campus show trial for the academic based on thinly-sourced sex abuse allegations from an ex-girlfriend and ideological deviations from the ultra-leftist group’s official orthodoxies.

Originally scheduled for May 3, the show trial was changed to May 10, according to the Facebook page of the Revolutionary Student Front–Austin. Unlike a lot of communist and anarchist groups whose members hang out in cafes and do little for their cause, RSF is known for taking action. For example, earlier this year the group vandalized a campus war memorial to mark International Women’s Day.

It was unclear at the time of writing if the “People’s Trial,” as RSF called it, had taken place on May 10 or was postponed again.

But whether or not the kangaroo court hearing moved forward in a timely manner, what we know about the process so far provides a window into the thinking of the formerly marginal campus left-wingers and activists who make up the backbone of the anti-Trump resistance movement.

So its intentions would be clear, RSF adorned its Facebook event notice for the trial with an August 1966 photo from Harbin, China, showing a Chinese Communist Party official forced to wear a placard accusing him of being a “counterrevolutionary revisionist element” while being criticized by fist-waving young Red Guards from a local university.

There is nothing particularly interesting about the work of Reece, a garden-variety leftist academic obsessed with the postmodern triumvirate of race, class, and gender. Reece would normally be immune from leftist criticism because he is a young black man from the Deep South who writes for the Southern Poverty Law Center.

Reece’s problems started in March when Vox published his article entitled, “How men are adjusting to the #MeToo era: ‘This is going to take a really long time[.]’” The piece is subtitled, “Men discuss the gray areas of intimate encounters.”

In the column, Reece explained that when he taught a male student that any sexual encounter without affirmatively expressed consent throughout the event was tantamount to rape, the newly enlightened male student told Reece “the topic was difficult to grapple with.” Reece observed, “that [the student] struggled to reconcile past encounters with his new knowledge of consent and coercion.”

Reece urged the student to get counseling but failed to report him to the campus authorities. Reece’s refusal to rat out his charge led the RSF to denounce the professor as “a serial rapist, abuser, and gaslighter.”

“We find this to be direct proof that Reece is an active threat to students on campus. Through his course, he is uniquely able to identify potential rapists, yet he does nothing to stop them — and worse, he shows them his sympathy as a fellow misogynist and abuser.”

Complicating matters further, activist Jazmine M. Walker, a former college girlfriend, claimed after Vox published his essay, that Reece “coerced her into an unwanted sex act” six years ago, according to a note Vox attached to the essay on March 27. After his piece went online, Reece tweeted, “I’ve been coercive before, specifically with my ex about ten years ago,” without elaborating. Reece does not appear to have criminal charges pending against him.

RSF wants to reeducate Reece and have him publicly beg for forgiveness in “a rectification process” as Mao’s Red Guards forced many to do during China’s bloody Cultural Revolution. If that doesn’t happen, the group plans to campaign for his removal from the university and use him as an example to keep future ideological dissenters in line.

Reece will be allowed the opportunity to decide if he will choose to undergo the process of transformation or instead choose to let his personal situation fall even further than it already has through a campaign that will aim to end his career at the University of Texas and any other universities permanently.

After Reece was forced to temporarily step away from teaching, RSF reflected that “we now have an opportunity to take up the difficult task of transforming an abusive man in power into a proletarian feminist,” despite the fact that he already considered himself to be a feminist-in-good-standing before the current controversy:

An important task for the revolutionary movement across the US is developing an understanding of how to transform abusers now so that we can neutralize threats to our growing movement and when possible, bolster its strength, and to be able to carry out this transformative process effectively when we do have the power to subject abusers to it.

Although there is no real evidence of wrongdoing, Reece “must be consistently attacked with reminders of his crimes,” so he will “understand how serious these allegations are and for him to realize that he must change.”

That is today’s radical Left in a nutshell.

The existence of the allegation is more important than establishing guilt.