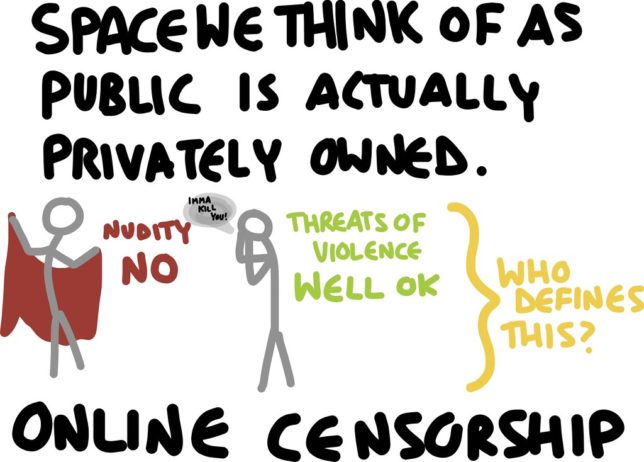 This article is the second in a CRC online symposium about the influence Silicon Valley exerts in public discourse.

Steven Crowder is the latest minor celebrity seeking sympathy from conservatives over allegations he is being “de-platformed” by a social media firm. The trivial consequences in this dispute are emblematic of many like it. If “Crowder v. YouTube” is proof of a problem, then there really isn’t one.

Crowder did not lose his ability to post commentary on YouTube. His advertising privileges were suspended – temporarily – in part because YouTube said t-shirts he is selling offend the private sector company’s community standards. (One Crowder t-shirt portrays communist thug Che Guevara, along with the slogan “Socialism is for fags”). If Crowder knocks out the t-shirt links, YouTube says it will consider letting him advertise again.

Recall the Christian bakers under fire for refusing to make cakes for gay weddings. That’s a close but still inapt mirror-image analogy for what is going on here. Imagine instead the bakers were asked to bake a cake declaring “Christians are fascists.” That gets to the same level as some conservatives insisting YouTube should accept advertisements for shirts associating gay people with communism. (Also: Guevara was a notorious womanizer and had a checkered history with homosexuals, so the YouTube community should also be offended by Crowder’s insult against historical literacy.)

Google (YouTube’s parent company) isn’t trying to censor and offend Crowder’s fans so much as trying not to offend its gay audience. The social media bias, such as it is, is in favor of making money from as many customers as possible. Note, for example, that a simple Google search still brings you to places to purchase the “Gay Che” t-shirts and more from Crowder.

What a slippery slope this must be! First the private business temporarily shuts down one of a half-dozen or more places on its platforms where you can purchase the historically inaccurate t-shirt . . . and from there it’s off to the socialist reeducation camps?

On June 25, Project Veritas lawyers sent a letter to YouTube, demanding reinstatement of the video. That afternoon Robby Soave of the libertarian magazine Reason accused Project Veritas of creating “deceptively edited” videos and said it should not be taken seriously. Soave has extensively covered and repeatedly criticized left-wing efforts to silence unpopular speech on college campuses and elsewhere, and is a sought-after expert on the issue: 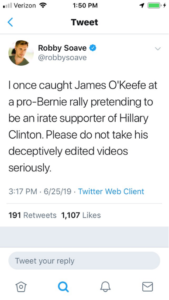 In full disclosure, I know Soave and have met and like Project Veritas founder James O’Keefe, and – though I’m not a party to either side’s facts – my gut leans towards O’Keefe in this dispute. But if even Soave, a highly prominent opponent of allowing left-wingers to muzzle the right, has concerns regarding the veracity of Project Veritas’ videos, then doesn’t a video platform deserve some benefit of doubt on whether to trust them?

Then there’s Facebook, which is still navigating through the PR disaster of allegedly (albeit unwittingly) profiting off a Russian dictator’s scheme to spread lies aimed at keeping a Democrat out of the White House in 2016. With this fact pattern, a case for a Facebook bias against conservatives needs to swim a long way upstream to get home. It is much easier to assume (then and now) that Zuckerberg Corp. is just motivated by money.

And yet, in May a writer at Breitbart blasted Facebook for cutting the cord on “prominent conservatives, including Paul Joseph Watson, Laura Loomer.” (How far we have fallen from William F. Buckley, Russell Kirk, and Sen. Barry Goldwater.) A fuller list of the afflicted included conspiracy nut Alex Jones (a former ally of fellow conspiracy nut Watson), anti-Semitic conspiracy nut Louis Farrakhan, white nationalist politician Paul Nehlan, and Milo Yiannopoulos.

Supposedly “prominent conservative” Laura Loomer has a history of disrupting and being removed from public events, and was similarly ejected from the March 2019 Conservative Political Action Conference (CPAC) for heckling a CNN reporter. “I am extremely offended an [sic] appalled that I’ve been banned by my own people,” she said of the nation’s largest and oldest annual gathering of conservatives. She followed in the path of Yiannopoulos, who got booted from a CPAC speaking gig in 2017 after videos surfaced revealing he had a sympathetic view of underage boys having relationships with older men.

Similarly, Nehlen, who mounted a GOP primary challenge against former House Speaker Paul Ryan, once had the support of former Donald Trump strategist Steve Bannon. But even Bannon and his far-right-curious Breitbart website cut off support when it was revealed Nehlen had appeared on white nationalist podcasts and Nehlen made numerous obviously anti-Semitic statements.

Prominent conservatives have—with very defensible reasons—judged Loomer, Nehlen and Milo as bad for the brand and dissociated with them. What then is the justification for insisting that Facebook do otherwise?

And the case against Alex Jones and Paul Joseph Watson – purveyors of paranoid fringe conspiracy theories at InfoWars ranging from 9/11 Trutherism to denial of the Sandy Hook school shooting—even comes with a healthy dose of conservative history behind it.

The John Birch Society was the InfoWars of the 1960s. Among other delusions, it portrayed President Dwight Eisenhower—the victor of Normandy—as a “dedicated, conscious agent of the Communist conspiracy.” The “Birchers” counted many conservatives among their members and fans, and earned rebukes from Democrats, most prominently President John Kennedy.

Into this storm sailed a conservative hero: National Review founder William F. Buckley. Building an anti-Bircher alliance among the era’s leading conservatives, including conservative thinker Russell Kirk, Sen. Barry Goldwater, and business advocate Jay Hall, Buckley used his perch at National Review to denounce the paranoia of the Birchers in a series of editorials, each more pointed than the last—with the open support of Goldwater, who would lead an insurgent conservative campaign for President in 1964. This came at a personal cost to Buckley, as National Review’s subscriber and financial base included many enraged Birchers.

But it worked: Buckley’s alliance sidelined the paranoid fringe, paving the way for mainstream appeal of what became the Reagan Revolution. Buckley and his allies showed both the necessity and long-term benefits of conservatives policing their own before the Left and the mainstream media did it for them.

Like the flawed humans behind them, social media corporations will sometimes and inevitably make questionable judgment calls regarding whom to boot from platforms. But those mistakes will be driven by profits, not politics. As with bars and restaurants and businesses of any sort, they have both a right and obligation to remove what they believe to be particularly noxious and disruptive guests who damage the user experience for others.

That’s a standard that conservatives would do well to replicate rather than denounce.