EPA Covers Up Role in Colorado’s Toxic Mine Spill

Two years after Gold King Mine in Colorado accidentally unleashed a torrent of 3 million gallons of toxic material into the local water supply, no employees of the Environmental Protection Agency (EPA) have been held accountable for their negligence in the spill. The disaster has ravaged the local environment with roughly a million pounds of metal contaminants and devastated the lives of residents and business owners near and along the Animas and San Juan Rivers in Colorado, New Mexico, and as far as Lake Powell in Utah.

In August 2015, EPA crews dug out a “plug” in the long-abandoned Gold King Mine, unwittingly causing a massive blowout of 3 million gallons of pollutant-laced water full of lead and arsenic. To make matters worse, the agency unwisely waited 24 hours before informing locals of the incident. Worried about the inevitable negative backlash, EPA administrators took steps to cover up the crew’s incompetence:

The EPA has put forth the fiction that its crew had simply removed backfill that was blocking access to a mine tunnel, but did not disturb the natural plug that had formed in the tunnel’s opening that was holding back a sea of acid mine drainage. 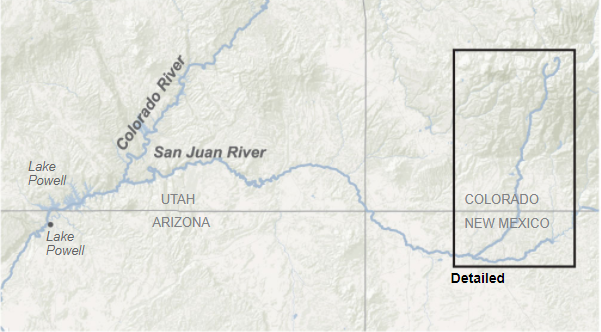 The New York Times contextualized what the devastation meant for locals:

The Animas River is the cultural soul of this patch of southwestern Colorado… Schoolchildren study the river. Sweethearts marry on its banks… State Senator Ellen Roberts, a Republican who lives near the river, cried softly as she considered the pollution, adding that she had dropped her father’s ashes in the depths of the river, which pollutants had turned into an unnatural-looking yellow-orange ribbon. “It is not just a scenic destination,” Ms. Roberts said. “It is where people literally raise their children. It is where the farmers and ranchers feed their livestock, which in turn feeds the people. We’re isolated from Denver through the mountains, and we are pretty resourceful people. But if you take away our water supply, we’re left with virtually no way to move forward.”

Likewise, the Navajo Nation relies on the San Juan River for drinking water and agriculture. Shaun McGrath, an EPA regional director, attempted to assure distraught residents: “We’re going to continue to work until this is cleaned up and hold ourselves to the same standards that we would anyone that would have created this situation.”

Yet the clean-up and investigation that ensued was highly unsatisfactory, prompting Navajo Nation president Russell Begaye to state in 2016: “The Navajo Nation has suffered due to the reckless actions of the U.S. Environmental Protection Agency and other responsible parties, and the Obama Administration has turned down virtually every request we have made for greater assistance, each time referring us back to the EPA.”

Indeed, the EPA figuratively spat in the faces of affected Navajo Nation, Colorado, Utah, and New Mexico residents by denying damage claims topping $1.2 billion over the Gold King Mine spill, arguing that paying the claims would exceed their jurisdiction. The agency has thus far made no effort to lobby Congress for local spill relief.

Inexplicably, the EPA officials responsible for the disaster have yet to be held accountable. In fact, an official in the U.S. Department of Justice has even assured the agency that at least one of the responsible officials would get off scot-free. For years, the EPA and its environmental lobbying groups have relentlessly attacked and shamed private corporations for similar debacle, such as British Petroleum’s (BP) 2010 Deepwater Horizon oil rig spill in the Gulf of Mexico. Companies are often pressured to fire culpable employees. A letter from members of the investigating House Committee on Natural Resources makes an important point:

By not taking up the case, the Department of Justice looks like it is going easy on its colleagues in EPA… [Justice officials’ actions] give the appearance of hypocrisy, and seem to indicate that there is one set of rules for private citizens and another for the federal government… The EPA disaster deserves the same level of accountability to which private citizens are held.

The Obama-era EPA received a pass from U.S. Attorney General Loretta Lynch, despite having violated the Clean Water Act and the Endangered Species Act. As William Yeatman writing for Capital Research Center points out in Green Watch, problems arise and are difficult to resolve when EPA officials hold immense, unchecked regulatory control over states and local communities:

It is an axiom in American politics that our system works best when power is kept closest to the people, and that local officials are best suited to solving local problems. It didn’t make sense to have Washington bureaucrats impose one-size-fits-all solu­tions in every place in the country. Impos­ing regulations from Washington without regard to local priorities—protecting jobs, for example—could have unnecessarily negative, even disastrous consequences.