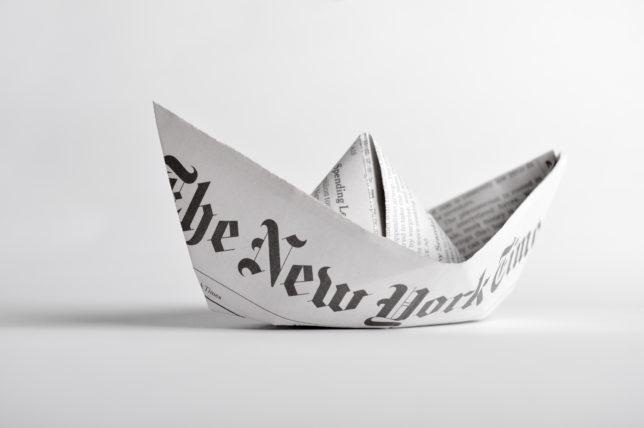 The masthead of the New York Times famously announces it is “All the news that’s fit to print.” The Washington Post’s warns “Democracy Dies in Darkness.” They are, respectively, the truth and the light—or so they’d have us believe. But two recent events demonstrate it often doesn’t work out that way.

In 2018, Columbia University President Lee Bollinger presented Pulitzer Prizes in national reporting to the staffs of the Times and the Post. The prize citation reads: “For deeply sourced, relentlessly reported coverage in the public interest that dramatically furthered the nation’s understanding of Russian interference in the 2016 presidential election and its connections to the Trump campaign, the President-elect’s transition team and his eventual administration.”

Freeman also quoted from one story the Washington Post submitted to the Pulitzer judges:

While Trump has derided the dossier as “fake news” compiled by his political opponents, the FBI’s arrangement with Steele shows that the bureau considered him credible and found his information, while unproved, to be worthy of further investigation. . . . Steele was known for the quality of his past work and for the knowledge he had developed over nearly 20 years working on Russia-related issues for British intelligence.

Of course, as the recent report from Department of Justice Inspector General Michael Horowitz has made clear, the Steele dossier and the reporting based on it was robustly developed rubbish. (Perhaps the Washington Post should transfer its Pulitzer to Horowitz’s office?)

If you had ignored all Pulitzer pulp written about Steele up through March of this year and instead read cookie recipes, you would have simultaneously improved the quality of your cookies and your knowledge of the world. Even reading a left-leaning pop culture rag such as Rolling Stone would have left you better informed.

That last part isn’t a joke.

Matt Taibbi, a decisively left-of-center contributing editor for Rolling Stone, has been spot-on about the Steele dossier at least as far back as early March 2017—mere weeks into the Trump administration. He spotted ominous holes in the “Trump is a stooge of Putin” fable right away and warned everyone to slow their roll:

Reporters should always be nervous when intelligence sources sell them stories. Spooks don’t normally need the press. Their usual audiences are other agency heads, and the executive. They can bring about action just by convincing other people within the government to take it. . . .

. . . Thus we are now witnessing the extremely unusual development of intelligence sources that normally wouldn’t tell a reporter the time of day litigating a matter of supreme importance in the media. What does this mean?

Taibbi has stuck to his guns for nearly three years, chronicling the unwinding of the Steele story even as those Pulitzer winners were winding it up. He recently summarized the highlights of Horowitz: “There are too many to list in one column, but the Horowitz report show years of breathless headlines were wrong.”

Similarly, the New York Times recently received yet another uncomfortable debunking from an unconventional source. Late this summer the Times released its 1619 Project, an effort to repackage the American experiment as little more than a slavery-inspired moral failure. But Elliot Kaufman of the Wall Street Journal editorial page wrote this week about the errors the Times made and the surprising people who jumped in to cry foul:

“So wrong in so many ways” is how Gordon Wood, the Pulitzer Prize–winning historian of the American Revolution, characterized the New York Times’s “1619 Project.” James McPherson, dean of Civil War historians and another Pulitzer winner, said the Times presented an “unbalanced, one-sided account” that “left most of the history out.” Even more surprising than the criticism from these generally liberal historians was where the interviews appeared: on the World Socialist Web Site, run by the Trotskyist Socialist Equality Party.

Selected just from this week and focused on only left-leaning (and FAR left-leaning), these are not isolated examples of the factual failings of the two elite newspapers. Scrappy little guys with a clear agenda frequently do a better job of accurately finding and portraying important facts the elite media has no incentive to look for.

For example, a left-leaning charitable foundation subsidized the work of many of the contributors to the Times’s botched 1619 Project. That relevant information was investigated and revealed by the Capital Research Council, not the Times or the Washington Post.

And while credulously cribbing the fables from the Steele hoax dossier was winning those Pulitzers, the May 2018 issue of Capital Research Center’s magazine featured “The Dirty Dossier.” It gave our readers a comprehensive history of the controversial document’s backstory and funding connections.

The New York Times boasts of 127 Pulitzer Prizes—it notes this is “almost double nearest competitor.” Even if we start right now, the Capital Research Center—America’s investigative think tank—probably can’t catch up. That’s okay, we’ll stick to providing our readers all the news that was missed in print.