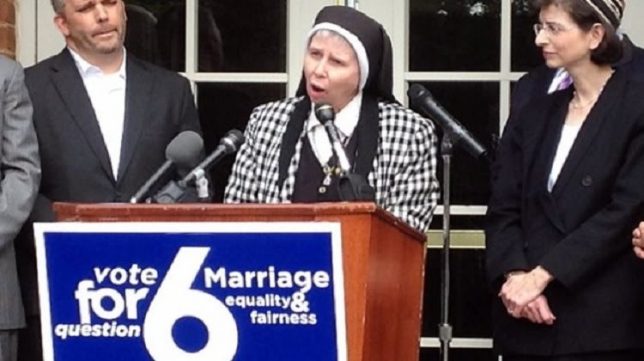 In a glowing 2002 tribute to these dissidents, Angela Bonavoglia wrote in The Nation, a leading secular Left journal, “In the spirit of the Second Vatican Council, the progressive reform groups embrace a broad agenda. They want women at all levels of ministry and decision-making; married clergy; optional celibacy; acceptance of homosexuals, the divorced and the remarried… and an affirmation of conscience as the final arbiter in moral matters.”

The heterodox come in two types: single-issue organizations focused on “reproductive rights,” homosexuality, and women’s “ordination,” and general reformers who have longer lists of demands. Some are extremely well-funded and receive the attention that only money can buy, and others, while boot-strapping it, nonetheless, get more attention from a sympathetic media than their meager budgets and memberships deserve.

By far the best-funded is Catholics for Choice (CFC), an organization of self-identified Catholics who do not recognize the authority of the Catholic Church on abortion or contraception, support even controversial late-term abortions, and launch publicity efforts deliberately antagonistic toward the Catholic Church.

The United States Conference of Catholic Bishops (USCCB) strongly rejects CFC’s identification as a Catholic organization and has stated that the organization promotes positions irreconcilable with Catholic teaching. (For more information, see the May 10, 2000 press release, “NCCB/USCC President issues Statement on Catholics for a Free Choice.”) But this opposition has not stopped some of the nation’s largest foundations from sustaining the organization with grants of tens of millions of dollars. Between 2006 and 2014 CFC received over $18 million from the Susan Thompson Buffett Foundation, as well as large donations from the William & Flora Hewlett Foundation ($5,735,500), Ford Foundation ($2,650,000), and the Huber Foundation ($1,155,000). CFC’s net assets in 2015 were over $12 million!

Organizations proselytizing for “LGBTQ equality” in the Church include Dignity USA, New Ways Ministry, and Fortunate Families. Dignity USA proclaims on its website its support for “sacramental marriage” for same-sex couples.

In 2015, Dignity hosted atheist homosexual sex columnist Dan Savage as a keynote speaker at their national convention. Savage had earned a reputation as a crude provocateur for his sex-advice column “Savage Love” and for his obscene attacks on Pope Benedict XVI, Rick Santorum, Ben Carson, and others. (Savage’s comments are too explicit  for this publication, but you can easily find his remarks with a quick Internet search.) Dignity executive director Marianne Duddy-Burke said Savage was invited to “speak on how his Catholic roots have influenced his advocacy and his actions.”

Since 2008, Dignity has received over $700,000 in grants from the Arcus Foundation, the progressive organization that (according to its website) “advocates for change to ensure that LGBT people and our fellow apes thrive in a world where social and environmental justice are a reality.”

With 2016 assets of $859,646, New Ways Ministry seeks to “combat personal and structural homophobia and transphobia… and promote the acceptance of LGBT people as full and equal members of church and society.” The organization was founded in 1977 by Father Robert Nugent, SDS, and Sister Jeannine Gramick, SSND. Constantly questioning Church teaching on homosexuality and refusing to clarify their formal position, the priest and nun quickly ran afoul of the local archbishop. In 1999, the Vatican issued a fifteen-hundred word “notification” that Father Nugent and Sister Gramick were “permanently prohibited from any pastoral work involving homosexual persons and… ineligible, for an undetermined period, for any office in their respective religious institutes.”

More recently, the USCCB has affirmed and reaffirmed that New Ways Ministry is not and never has been “authorized to speak on behalf of the Catholic Church or to identify itself as a Catholic organization.” Yet the “ministry” lives on, advocating for “marriage equality” and transgender rights. This past November, on All Saints’ Day, New Ways outed the “queer” saints. These supposedly include Saint Francis of Assisi, Saint John of the Cross and, absurdly, St. Augustine famous for having had a mistress and at least one illegitimate child.

New Ways is also a beneficiary of Arcus Foundation’s generosity and shared a grant with Dignity in 2014 “to influence and counter the narrative of the Catholic Church and its ultra-conservative affiliates.”

There are several 501(c)(3) and membership organizations demanding that the Church ordain women priests. Among these are Roman Catholic Womenpriests, Association of Roman Catholic Women Priests (ARCWP), Women’s Ordination Worldwide (WOW), and Women’s Ordination Conference. Roman Catholic Womenpriests even began coordinating the “ordination” of women in 2002. The organization claims there are about 200 priestesses “legitimately” ordained by current Catholic bishops whose names the organization will not reveal until the prelates die. Many of these priestesses were quickly declared excommunicated by their bishops, and on May 29, 2008, the Vatican published a general decree that any woman who attempts to receive holy orders or any bishop who attempts to confer holy orders on a woman is automatically excommunicated.

Other heterodox Catholic organizations seek more extensive reform in the Church. While most of them advocate for priestesses, recognition of same-sex marriage, birth control, etc., their missions cast a wider net. These organizations include Call to Action, Pax Christi, Women-Church Convergence, FutureChurch, American Catholic Council, Association for the Rights of Catholics in the Church, 8th Day Center for Justice, Catholic Church Reform International, and Catholic Coalition for Church Reform.

Catholic Organizations for Renewal (COR) is a leadership forum of U.S. church reform organizations to which these organizations belong. COR’s goal is to “further reform and renewal in the Roman Catholic Church, to build an inclusive church, to bring about a world of justice and peace and to reflect the sacredness of all creation.” Perhaps the best illustration of the subversive goals of these organizations is the “Charter of the Rights of Catholics in the Church,” drafted by the Association for the Rights of Catholics in the Church and endorsed by the COR member organizations. These “rights” include, but are certainly not limited to the following:

Unitarians and other fringe Protestant denominations might be proud of such a platform; Catholics, not so much.

Heterodoxy comes from within the Church as well. Founded in 1969 and claiming over 2,000 members, the National Coalition of American Nuns (NCAN) seeks “full acceptance of the fact that: A woman cannot have full autonomy unless she has Reproductive Autonomy.” NCAN is run by notoriously “pro-choice” Sinsinawa Dominican Sister Donna Quinn, who has somehow managed to evade excommunication.

In the next installment of Dissenting Catholic Charities, we investigate how Catholic social justice groups organize for left-wing causes, like expanded abortion access, and even work to advance the Democratic Party.