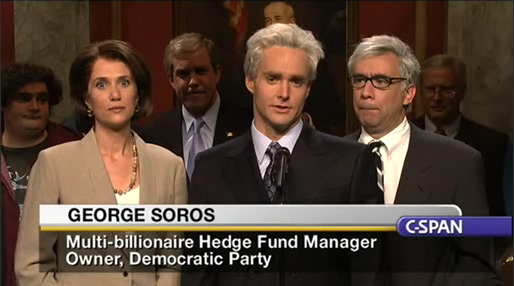 It’s not often that the people we study and write about here at Capital Research Center get parodied on NBC’s “Saturday Night Live,” but last night that’s what happened. (video available here)

SNL produced a fake C-SPAN TV broadcast in which the characters discussed the Wall Street bailout package that became law Friday. Herb and Marion Sandler, the co-founders of Golden West Financial Corp., were depicted as greedy criminals, and George Soros was depicted as a master financial manipulator and as the “owner” of the Democratic Party.

Soros and the Sandlers are key figures in the Democracy Alliance, which aims to create a permanent political infrastructure of nonprofits, think tanks, media outlets, leadership schools, and activist groups—a kind of “vast left-wing conspiracy” to compete with the conservative movement. (For more on the group, see “Billionaires for Big Government: What’s Next for George Soros’s Democracy Alliance?” By Matthew Vadum and James Dellinger, Foundation Watch, January 2008)

The Sandlers sold their S&L holding company, which was built on troublesome adjustable rate mortgages (ARMs), to Wachovia in 2006 for $24 billion in cash and stock. Wachovia is now –surprise, surprise– struggling. In 2004 the Sandlers gave $13 million to anti-Bush 527 groups.

Mr. Sandler is angry about the skit. “I have been listening to this crap for two years,” Sandler told USA Today. “We are being unfairly tarred. People have been telling us to speak out for some time, but we didn’t think it was appropriate. That was clearly a mistake.”

For more on the Sandlers, read this fascinating article by Ed Lasky at the American Thinker.

Liberal philanthropist George Soros, who played a major role in creating the Democracy Alliance, was depicted on SNL as an amoral financial speculator. We’ve written about Soros extensively. Search our online database for more on him.

(Hat tip to Noel Sheppard of NewsBusters who wrote about the topic here.) 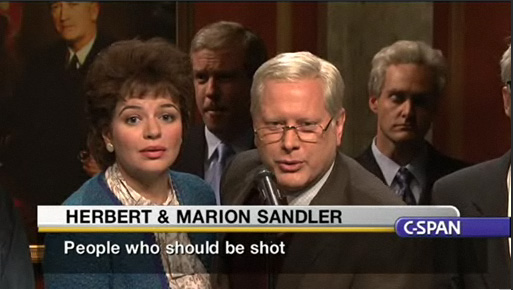 Another screen grab from the October 4 “Saturday Night Live”