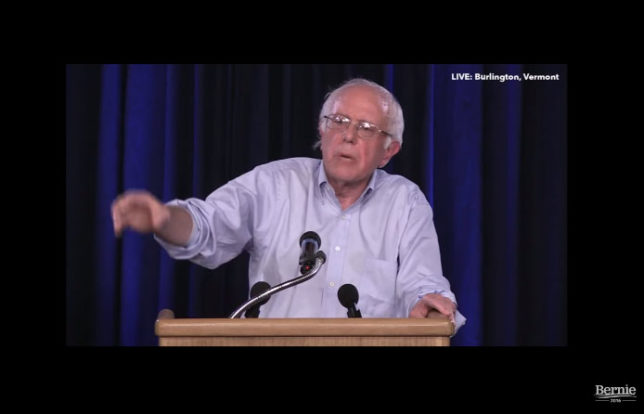 Editor’s Note: This is a follow-up to a previous CRC original investigation into Creative Majority’s non-profit entities.

Today, if you go to the Rhode Island Avenue address you will not find any of Goodstein’s organizations, though they were there according to other employees in the building. The neighboring office, which has since leased the original CM office space, knew them as the “Bernie group.” The “Bernie group” used “Revolution Messaging” as the name for the entity occupying the office. When asked about the group, one of the employees in the building said the group moved down to Connecticut Avenue shortly after the 2016 election, and surprisingly stated glibly that the group had “got themselves in trouble”; but he did not explain further.

With the only address to verify the group’s existence not panning out, the options were to either go to the address from the original 2012 revoked business application, or go to the current address of Revolution Messaging and CMPAC on Connecticut Ave.

Section 6104 of the IRS code requires that any tax-exempt nonprofit organization must make specific tax documents available to the public. This includes a wide range of documents to verify that the organization is operating in compliance with U.S. law. The law also stipulates that if someone makes an in-person request, the nonprofit must provide the requested documents within the day, or else risk a hefty penalty. This is, in fact, a common practice for activists and concerned citizens to request this information. Most nonprofits have copies readily available, or websites such as GuideStar, Citizen audit, or the IRS website, post Form 990s online.

On December 14th, 2018, CRC sent a representative to the office on Connecticut Avenue. An office employee confirmed that it was the address of Revolution Messaging. When asked for all the legally required documents, the employees consulted Revolution Messaging’s Human Resources director, Tracye Beaman, who was surprised by the request. Beaman replied that she would be unable to provide the documents that day, but could provide them the following week, claiming that she could not make her staff stop their other activities to provide the requested documents. Furthermore, she then informed CRC that she was prepared to call security and proceeded to close the door. As she was closing the door, we told her that CRC would be within its right to file a complaint with the IRS if she failed to provide the documents. She reiterated that she could not provide the documents and closed the front door.

As Ms. Beaman walked away, she instructed another employee to call security if CRC persisted in making the request. CRC left empty-handed.

Other CRC staff attempted to obtain the documents in-person, and to inquire about the inconsistencies of the organization’s records. At that point Beaman changed her earlier statement and said that CM was not at that address and that its former leader, Scott Goodstein, no longer worked there, and therefore, had no current relationship with Revolution Messaging. She did not make any similar statement about CMPAC, despite that also being a Scott Goodstein creation, and almost certainly tied to CM.

But Beaman’s statements conflict with the fact that CM still presents itself as an active nonprofit and solicits donations; it did not just vanish after Goodstein left. Furthermore, there is no other address for the organization, leaving the address of just its two affiliate groups. Then there is the fact that Goodstein was not the president of the nonprofit.  Arun Chaudhary, who still currently works for Revolution Messaging, was seen in the building when CRC requested the documents.

This phantom nonprofit is a serious issue for a couple big reasons: records would suggest it was never recognized by the IRS while it was more active from 2012 to 2016. There is no way to track CM’s activities with the revenue it acquired.

CRC has since filed an official complaint to the IRS, though due to the partial government shutdown that started in December 2018, it is unlikely to be investigated for the time being. Stay tuned for further information on this developing story.