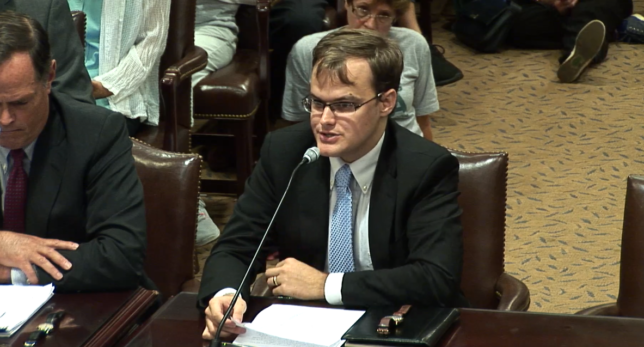 Good morning. My name is Michael Watson, and I am research director of the Capital Research Center, a nonprofit based in Washington, D.C. that studies organizational interests and their effects on American public policy. I would like to thank the committee for inviting me to speak on redistricting.

Politicians and political parties have battled each other over the manner of reapportioning members of legislatures and the drawing of districts since the beginning of the Republic; even the word for aggressively partisan district-drawing, “gerrymandering,” is over 200 years old.

The public is within its rights to debate the representativeness of its legislatures and to question if “fairer” representation can be had. But before we can even begin to debate the “fairness” of legislative apportionment, we need some basis for comparison.

A proposal before Congress known as H.R. 1 seeks changes to the process such that when “considered on a Statewide basis,” congressional redistricting would not “unduly favor or disfavor any political party.”[i] The proposal would then require all states to set the boundaries of their Congressional districts by using purportedly independent redistricting commissions, like the one currently used in California.

That raises two questions: First, how much do current Congressional district maps “unduly favor” one party or another? Second, do supposedly independent commissions in fact draw district maps that produce state-level proportionality among the parties—or at least produce more state-level proportionality than occurs in states that do not use purportedly independent commissions to draw the districts?

To set a control condition, I conducted an analysis that took real-world election results for the House of Representatives from 2010 through 2018 and then applied a simplified version of the mathematical procedure used by many countries to allocate their representatives to the European Parliament.[ii] The method allocates seats proportionally to competing parties, based on the total votes cast for each party in the jurisdiction, to equalize the votes cast per seat won by each party to the extent possible given the number of available seats. Proportional representation in some form has been advocated by some supporters of changing Congressional reapportionment procedures.[iii] A federal law passed in 1967 bars states from creating multiple-member Congressional districts and using this procedure. (H.R. 1 would not modify the requirement for single-member Congressional districts.)

If a Congressional map does not “unduly favor” any political party, then—all else being equal—a state with multiple Congressional seats would elect a delegation of Representatives whose Democratic/Republican ratio approximately matches the proportion of the total votes cast in the state for Democrats and Republicans. Interestingly, we find that the present Congress already has essentially the same partisan breakdown that it would have if the 2018 vote totals were used to allocate representatives proportionally state-by-state: The Democratic caucus would have an identical 235 members. Pennsylvania’s districts, as redrawn by the state Supreme Court, would have one Republican replaced by one Democrat, and the vagaries of district-drawing (and the proportional allocation system) in other states would, in total, even out individual states’ variances from strict proportionality.

Another major finding of the analysis calls into question the idea that independent commissions draw Congressional districts that necessarily end up closer to the state’s proportional vote than do states that draw their districts under a legislative, judicial, or politician-commission system. From 2010 through 2018, states with “independent” commissions deviated no less, and in the current Congress deviate far more, from the proportional allocation than states that did not use such commissions.

California, long a model for fashionable electoral “reforms”—including independent redistricting commissions, top-two primaries, and extended voting periods—has been especially “unfair” for election after election, when judged by the proportional representation standard. In all the election cycles studied, California deviated by at least 9 percentage points in favor of excess Democrats (5 of its 53 seats) in each election. In its 2018 election, California produced a dramatically disproportionate result: it returned the Democrats an “extra” ten seats relative to the statewide vote proportion.

The currently debated means of assigning representation all come with advantages and disadvantages, and every manner of district-drawing is subject to the influence of organized political interests. A commission not responsive to the electoral process and given wide discretion to define the nature of districts is open to gaming by partisan political forces indistinguishable in effect from the legislators the commission replaced. ProPublica reported on extensive intervention by organized interest groups with ties to legislators influencing the 2010-cycle California redistricting in favor of those legislators’ interests.[iv]

Apportionment of seats in the legislature is a fundamentally political act; there is no “scientific” way to determine how communities should be allocated and political ideals should be contested. Current Pennsylvania law allows the voters of the state at large, through elections for the state governor and lieutenant governor, for the attorney general, and for judicial offices to act to reform their representation if voters feel such representation is inadequate.

Thank you for the opportunity to testify this morning; I welcome any questions you may have.