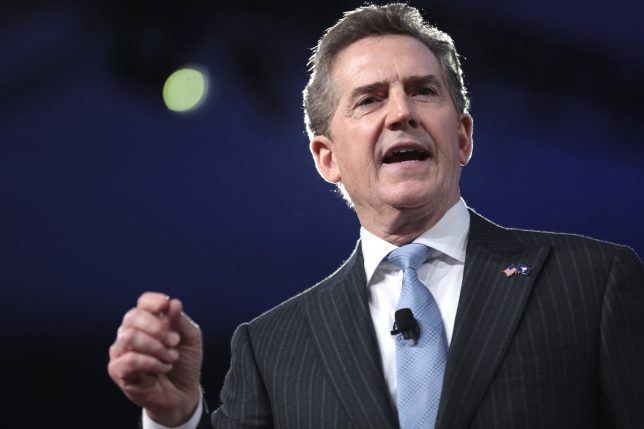 Update: Conservative activist Ben Shapiro has added his name to the growing list of COS endorsements.

The Convention of States Project (COS) has added a prominent conservative voice to its staff: retired South Carolina Senator Jim DeMint, who recently left his post as head of the Heritage Foundation, will be a paid senior advisor for COS, which is leading the effort to have the states call for a new constitutional convention that would produce amendments which, if passed, would restrain the powers of the federal government.

DeMint played a key role in the Tea Party movement that helped Republicans regain a majority in the U.S. House of Representatives. “I tried to rein in Washington from inside the House and Senate,” DeMint said. “But once I realized that Washington will never willingly return decision-making power back to the American people and the states, I began to search for another way to restrain the federal government.”

Many conservatives, fearing the country is shifting ever more to the political Left, have concluded that elections don’t count as much as they used to.

“We keep changing personnel and hoping it will fix the problem but the problem is structural,” says Mark Meckler, president of Citizens for Self-Governance, the parent organization of the Convention of States Project. “So if we put good people in, we still get bad results. We have a fiscal house that is a disaster. The federal government is out of control. It will never rein itself in.”

CRC vice president Matthew Vadum recently reported on the Convention of States for our Organization Trends series of research. He notes that, although no such convention has ever occurred, the Project has enjoyed “considerable—and growing—grassroots support” since it first launched in 2012. To come into force, COS needs the call for a convention to receive support from two-thirds (34 out of 50) states. Twelve states have already adopted the necessary resolution.

Many influential conservative activists and scholars support the movement, including an impressive array of leading legal advisers:

COS has also been endorsed by a diverse array of conservative political leaders, including

The Framers of the Constitution, Mark Levin notes, “rightly insisted on preserving the prominent governing role of the state legislatures as a crucial mechanism to containing the power” of the federal government. The Convention of States Project is clear about its ambitious goals, which include:

The only way to erase “115 years of ‘Progressive’ gains,” Meckler insists, is to “throttle back the authority of the federal government.” The alternative could spell disaster for the nation. “If we don’t fix this, civil war is the trajectory. The question that is facing America today is simply, who decides?”