The Community Garden That Is So Much More 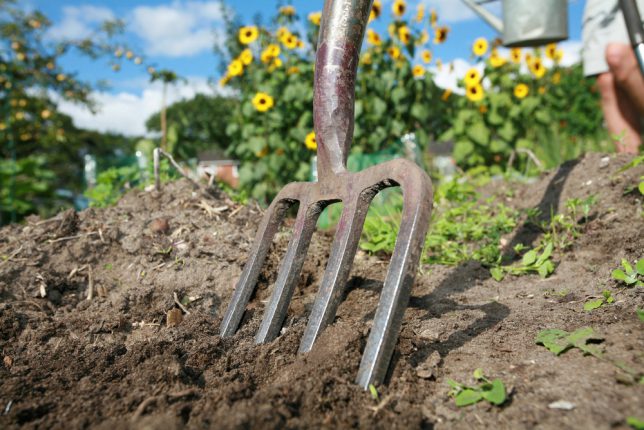 In my conversation with the co-founder of the Turkey Thicket Gardeners Association, I expected to learn about how to create a community garden, the challenges of dealing with government bureaucracy, and the benefits that people receive from being a member of a community garden.

To my surprise, I instead learned about what a community is, the cultivation that a community needs to exist, and the benefits received from living in and being part of a community.

Brookland, a neighborhood in northeastern Washington, D.C., is a community. Or, at least, a community exists in Brookland. One of the people actively trying to nurture and cultivate that community is Chenelyn Barker. Ms. Barker founded the Turkey Thicket Gardeners Association with a few other Brooklanders three years ago.

Barker is from Portland, Oregon, where growing a garden is “a lifestyle for us,” she told me. “When I saw the advertisement for folks to get involved in managing the garden—what would soon become the TTGA, Turkey Thicket Gardeners Association—I jumped on board. Living in the district,” she continued, “you have very minimal land space, so although, I do have a backyard, it’s not enough for a full-grown garden. I really wanted to be part of making a garden.”

Before the lot that would become the home of TTGA was ready for planting, “it was just an empty lot,” Barker told me. Concrete. “Like an empty parking lot without the car lines,” she said. On the adjacent lot was a playground that she described as “not dilapidated,” but “it wasn’t a very good playground.” The community worked with the Turkey Thicket Recreational Center and Department of Public Resources (DPR) to rebuild the playground. And that’s how the garden came to be: “Simultaneously, when they were building the new playground—which, I’m biased, I think is the best public park in Ward 5—they built the garden, with the raised garden beds.” 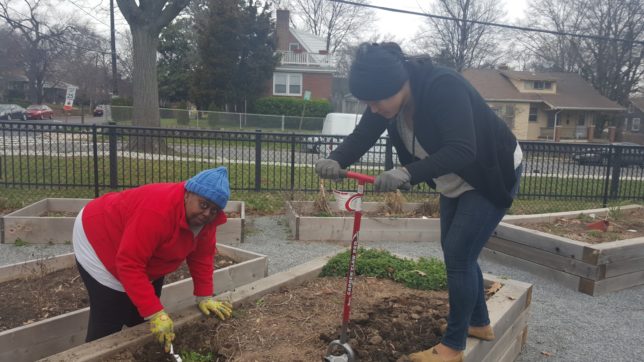 For the first time, I was pretty pleased with the D.C. government: taking an empty lot and giving it a purpose that will benefit the people living near it. Then Barker continued:

The one thing that I didn’t appreciate is that they took clay dirt from when they were building the new playground and filled the garden boxes. I don’t want to place blame—whether it was the D.C. government or the construction workers—but clearly, whoever oversaw that didn’t use their best judgement. A lot of our folks spent a lot of time removing a lot of that dirt from the boxes so that new dirt could go in. It was a mess in the first few months.

So it wasn’t exactly a home run for the D.C. government; it was more like a foul ball. This was back in 2014, the same year that Barker received the email inquiring about interest in managing the garden from the Brookland listserv, an email group that people can join to hear about and disseminate community news and events. I had to admit that I had no idea D.C. neighborhoods have listservs, and I’ve been living in the Capitol Hill neighborhood for over a year.

After responding to the email, Barker headed to Petworth (another D.C. neighborhood) with the other interested gardeners for a two-hour training class. Some attendees were also from Brookland, while others came from different parts of the city. They learned about the basics of applying for 501(c)(3) nonprofit status and creating bylaws.

Not long after the class, the handful of volunteers from Brookland had successfully established the Turkey Thicket Gardeners Association.

“What, exactly, is in the bylaws of a nonprofit community garden?” I asked.

There are some basics, like who can have a plot in the garden. “Anyone in D.C. can plant there, can have a garden,” Barker explained, “but preference is given to folks who live in the area, within a two- to three-mile radius of the garden, because it’s easier for them to come and take care of their plots.” Barker herself is “there almost every other day because I live so close; I’m about two blocks away from it.”

Also included in the bylaws are garden maintenance rules, along with rules for “inner-garden etiquette” and “responsibility as a gardener.” “Last year,” she told me, “we had a couple of people who didn’t clean off their plots and never came to the mandatory clean ups, so we had to write them and tell them that they’re kindly not welcome back because they didn’t adhere to the bylaws. … If you’re committed to being part of a community garden, you need to do your own individual share and duty of taking care of your plot.”

Freeloaders are not welcome in the Turkey Thicket Gardeners Association.

Once past the basics, the bylaws continue and outline a community inclusion plan. Excitedly, Barker told me about the plan:

This year, we are going to establish the first annual Turkey Thicket Gardeners Association garden party meet-and-greet. We’ll have all the gardeners meet each other, and we’ll also engage the community. We’ll post “come to the garden” things on the listserv. Our treasurer’s wife is going to be face painting, and we’ve talked about doing balloon animals for the kids.

I see people always looking when I’m there, all these people passing, walking around, inquisitive about what it is. A lot of folks don’t know that they can come into the garden and look around.

Barker’s making efforts to let everyone in the neighborhood know that this garden is a space that’s open to all members of the community. Currently, TTGA members range from twenty-somethings to retired couples. But Barker wants to expand the community garden’s reach much further.

Putting the “Community” in Community Garden

Barker is working toward integrating the garden into the community and also helping the community to flourish. “We have to help and network together,” she said. “That’s what it’s about. Government isn’t going to help the communities themselves. We have to get our problems solved as individual citizens—to do what government is not going to do for us.”

Members of the TTGA pay just $30 annually for the use of their plots. That’s not nearly enough to cover the cost of all the necessary supplies. In the first year, the garden manager acquired some second-hand tools, and DPR provided the members with new soil, but that didn’t happen this year, so dues were used to buy new soil. Barker talked of partnering with local businesses for in-kind donations of tools, dirt, plants, and the like. “We want a partnership with some of these other local entities, and then we also want to really promote and grow our educational program.” 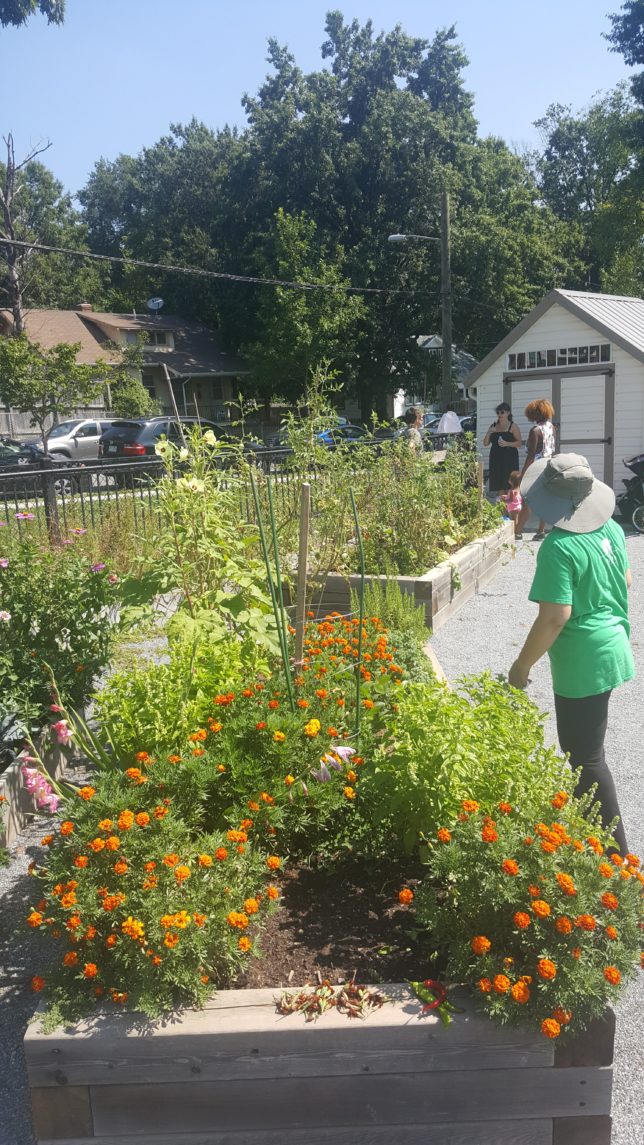 Next year, Barker is hoping to start the Children’s Gardening Program. “We want to educate them about gardening.” Her hopes for the garden go much further than that, however.

I want to engage people. I want to engage the community and the younger generations. I don’t think a lot of people know where their food comes from, how it’s outsourced, why people eat seasonally, why you should have a garden in your backyard versus shopping at trendy places. Especially if you don’t have the money to buy those foods. Not everyone has the money to go to Whole Foods. That’s great that they’re resourcing fresh, natural food, but that’s my whole problem [with it]. …

Eating fresh food shouldn’t be limited by your income.

Everyone should be able to have fresh food in their backyard, and gardening is the simplest way to educate yourself about that. …

So we just want to engage the community and provide them with tools to educate themselves on where their food comes from and finding low-cost, healthy alternatives that teach them self-responsibility for themselves, as individuals, and for their families.

The Community Garden as a Mediating Institution

When I first decided to interview Barker, I thought, “This will make for a great article on community gardens, and how they provide people with an opportunity to grow their own food in an urban environment.” I wasn’t wrong, but the TTGA turned out to be so much more than just a community garden.

Through the efforts of the founders, the Turkey Thicket Gardeners Association has become a mediating institution—an entity that brings people together, holds them responsible to one another, and provides them with tangible and intangible resources that they’ll never receive from government assistance.

Often, mediating institutions are places of worship—entities that by their nature hold people accountable for their actions, expecting a certain level of responsibility and connectivity from their members. Barker and the other TTGA founders have managed to create a similar mediating institution that will help to bind the Brookland community together for years to come.

At this year’s meet-and-greet, gardeners and community members alike will get the chance to know each other. I’m embarrassed to say, I don’t know the next-door neighbors on either side of my home. I don’t even know the young ladies who live in the apartment above mine.

It seems simple, but just getting to know one another is the first step in creating a strong community. The TTGA has created a meeting place for all community members, which strengthens the bonds of the community by creating shared responsibility. Every member is responsible for maintaining the garden.

When gardeners meet each other, they often choose “watering buddies.” I had never before heard that term, but I understood immediately what it meant. These near-strangers rely on one another to keep their gardens healthy, if they go out of town or can’t make it to water their plants for some reason. This creates a sense of shared responsibility between individuals, which additionally strengthens the community.

Bringing in children to teach them how to grow their own groceries extends the reach of the garden as a mediating institution. Rather than looking to the government for assistance, these kids will learn at a very young age that they can be self-reliant and look to their communities if they ever need help. Teaching self-reliance and the basics of gardening allows children to realize that they are capable individuals.

The value of mediating institutions cannot be understated. As Barker said, “Government isn’t going to help the communities.” It takes the time and effort of people like her to turn a neighborhood into a true community. Mediating institutions like the Turkey Thicket Gardeners Association are crucial for creating a culture of responsibility within a community. When neighbors get to know each other, and everyone uses public spaces, the entire neighborhood begins to feel like home, and people who are connected to the community treat their shared home with respect.

The longer Barker and I spoke, the more I began to feel that I’m not doing nearly enough to cultivate the community in my neighborhood. The effort that it takes to create a community is an investment that will pay off for years. Through our conversation, I realized that I haven’t been taking any steps to help the neighborhood that I love so much to flourish.

For Barker, her next steps are creating a website for the TTGA and implementing a fundraising strategy. My next steps? I plan on introducing myself to my neighbors and joining the Capitol Hill listserv to see how I can get involved in my own neighborhood.