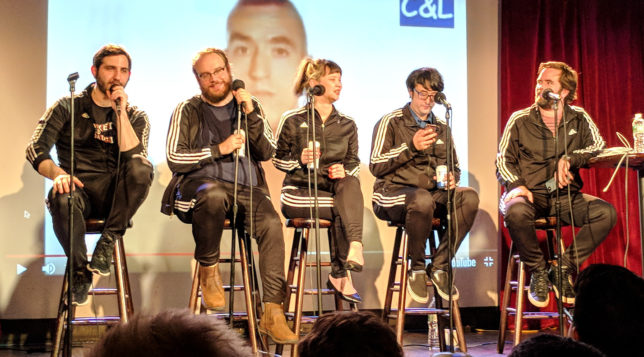 The Daily Wire recently reported StubHub hawking $6 seats for the May 4 showing of “An Evening with the Clintons” in Los Angeles, while Britain’s Daily Mail said using Vivid Seats would get you in for $2. This is a startling measure of what is now popular with Democrats. A 90-minute live and exclusive visit with the most recent Democratic Presidential nominee, appearing alongside a two-term Democratic President, was within the price range of a middle class fifth grader.

So what message is selling with center-left voters who will soon decide the next Democratic Presidential nominee?

Compared to the universally known Clintons, most Americans don’t know about these stridently Marxist millennial podcasters: Matt Christman, Felix Biederman, and Will Menaker. But the Chapo hosts have a sense of humor, valuable insights, and something else the Clintons now lack: an audience. These work-hating, hard-core socialists, some of whom were only marginally attached to a career prior to starting the show in mid-2016, now have almost 30,000 paying customers forking over nearly $130,000 per month for the premium content offered by the show.

The twice-weekly shows predictably promote socialism and excoriate capitalism, President Trump, and Republicans in general. But their most venomous barbs are directed at mainstream Democrats such as the Clintons and their cronies, lately Joe Biden, and often left-of-center ideology factories such as the Center for American Progress.

It isn’t necessary to agree with Chapo to recognize that their humor and political insights are sometimes razor-sharp. While most mainstream Democrats and nearly all mainstream media spent two years obsessing over allegations the 2016 Trump campaign had colluded with Russian agents to cook the election results, the Chapo hosts reliably (and presciently) mocked the rumor as a delusion and a distraction.

However, Chapo’s popularity confirms that conservative and libertarian concerns about the influence of socialism aren’t overblown.

Following President Trump’s February 2019 State of the Union address, in which he declared he would fight against the socialist impulses that animate clearly popular Democratic politicians such as Bernie Sanders and Alexandria Ocasio-Cortez, two different Washington Post commentaries swiftly denounced the President for exaggerating the concern. Catherine Rampell dismissed Trump’s words as “lazy name-calling from a lazy thinker,” while commentator Pete Waldman pleaded with media to stop asking “dumb questions” about socialism.

A more insightful analysis comes from Chapo co-host Will Menaker, who has said “right-wing media” (outlets such as Fox News) do a “better job” of reporting on socialism than do the mainstream media. In Menaker’s view, this is because of an effort by the “liberal media” (which he defines as mainstream outlets like CNN and the New York Times) to downplay the success of socialist messaging.

Taking the word of the WaPo political analyzers, a reader could be forgiven for not knowing that some foul-mouthed millennials are pulling down serious coin by flagrantly embracing socialism. Or that the Marxists succeed in part because of their clever advocacy of Bernie Sanders, an avowed socialist, favorably viewed by 73 percent of 2020 Democratic Presidential primary voters, who is running a strong second in just about every poll, and raking in boatloads of campaign cash.

After deducting the presumably minimal production costs of their podcast, the handful of Chapo hosts would seem to be on pace to divvy up about $1.5 million in gross revenue over the next year. Last year they published a book: it was a New York Times best-seller.

Meanwhile, the price of a ticket to listen to the Clintons rivals the cost of a Happy Meal.

Socialism, as measured by the bottom lines of Bernie or Chapo, is experiencing unprecedented and undeniable wealth and influence within the Democratic Party. President Trump is correct: It’s long past time for mainstream media and everyone else to start taking the threat of socialism seriously.