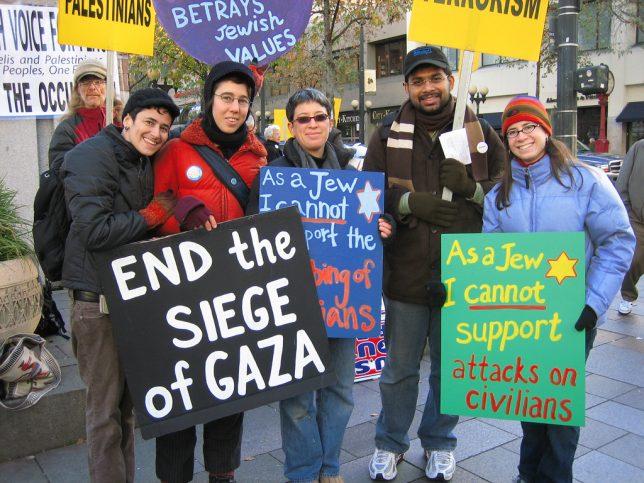 Yet another planned college talk by controversial speaker Milo Yiannopoulos has been postponed due to alleged safety concerns; this time, New York Mayor Bill de Blasio personally put pressure on New York University (NYU). Before NYU succumbed to de Blasio’s demand, one of the groups calling for the event’s cancelation was the NYU chapter of Jewish Voice for Peace (JVP), which tarred Yiannopoulos as an anti-Semite, despite the group’s own problems with exacerbating anti-Semitism.

The NYU JVP “Public Statement on Milo Yiannopoulos” featured 17 signatories, including NYU Students for Justice in Palestine (SJP), the NYU Muslim Students Association, J-Street at NYU, and NYU Young Democratic Socialists of America. In the statement, NYU JVP described Yiannopoulos as a “virulent racist, an anti-Semite and Islamophobe, and a supporter for the far right,” and argued his presence on campus would be inappropriate in light of the deaths of 11 Jews at the Tree of Life Synagogue (and other recent tragedies). The letter pleaded for NYU to do “its part to end the cycle of violence and normalization of white supremacy” by intervening and canceling Yiannopoulos’s talk.

The claims of antisemitism against Yiannopoulos are spurious, given the fact that he is Jewish on his mother’s side and calls himself “Jew-ish.”

Despite JVP’S characterization of Yiannopoulos, JVP’s anti-Semitic behavior has even been condemned by the Anti-Defamation League (ADL). While JVP criticizes American and Israeli Jews for their interpretations of Judaism, JVP has a long history of distorting Judaism in order to support its own political causes.

For example, a 2013 report from the ADL revealed JVP’s 2012 Passover Haggadah included references to the boycott, divestment, and sanctions (BDS) movement and the “Palestinian struggle.” As noted by Legal Insurrection, the trend of Passover Haggadahs being used to smear Israel and support social justice causes has been a theme throughout the years.

The most recent Haggadah included an introduction by the JVP’s Rabbinical Council. Part of the introduction called on people to “dedicate our seders to all of us, to our insistence on intersectionality, from gentrification to colonization; we are organizing to disrupt the root causes of displacement and violence at home and abroad.”

When referencing the story of Passover, the JVP Haggadah made sure to mention that the Egyptians of today are not the Egyptians of yesterday, as comparing them would perpetuate the Islamophobia allegedly rampant in the media:

We are not conflating contemporary Egyptians with the pharaoh and taskmasters that appear in the Passover story. In the U.S., and worldwide, anti-Arab racism and Islamophobia saturate our media and our culture, and we must be vigilant to oppose it and interrupt it at every turn.

The Haggadah also made sure to differentiate between the ancient Israelis and modern Israel:

Likewise, the word Yisrael (Israel) when found in the liturgy does not refer to the modern nation/state of Israel. Rather it derives from the blessing given to Ya’akov (Jacob) by a stranger with whom he wrestles all night. When Ya’akov finally pins the stranger down, he asks him for a blessing. The stranger says, “Your name will no longer be Ya’akov but Yisrael for you have wrestled with God and triumphed.” Therefore, when we say “Yisrael” in prayer we are referring to being Godwrestlers, not Israelis.

The Haggadah even dedicated the third glass of vine of the Passover service to the BDS movement, writing, “L’chayim to Boycott, Divestment, and Sanctions!”

JVP has long supported the BDS movement. The organization proudly boasts on its website it is the “only major Jewish group to support the Palestinian civil society call for boycott, divestment and sanctions.” InfluenceWatch summarizes BDS as “an international campaign to delegitimize the State of Israel as the expression of the Jewish people’s right to national self-determination by isolating the country economically through consumer boycotts, business and government withdrawal of investment, and legal sanctions.”

In 2017, JVP “proudly” invited convicted terrorist Rasmea Odeh to speak at its national conference. In 1970, Israel sentenced Odeh to life in prison after she confessed to her role in two bombings in Jerusalem, one of which killed two college students. Ten years later, however, she was released as part of a prisoner swap. This is in direct contrast to JVP’s mission statement, which claims the organization supports an “end to all violence against civilians” and a “[p]eace among the peoples of the Middle East.”

While the summary of JVP’s conference stated it was meant to tackle the alleged “right-wing extremism” of President Trump and Israeli Prime Minister Benjamin Netanyahu, it attempted to downplay Odeh’s terrorist conviction. The official statement on Odeh’s inclusion said, “In both Israel and the U.S. the accusation of terrorism is used to stoke fear, dehumanize whole communities, and violently repress, incarcerate, bomb, deport, spy on, invade and occupy those communities and their homelands.”

In 2017, JVP also started its “Deadly Exchange” campaign, which alleges that Israel is responsible for teaching the American police, FBI, and ICE to target minorities:

One of the most dangerous places where the regimes of Trump and Netanyahu converge is in exchange programs that bring together police, ICE, border patrol, and FBI from the U.S. with soldiers, police, border agents, etc. from Israel. In these programs, “worst practices” are shared to promote and extend discriminatory and repressive policing in both countries. These include extrajudicial executions, shoot-to-kill policies, police murders, racial profiling, massive spying and surveillance, deportation and detention, and attacks on human rights defenders.

According to a PowerPoint on JVP’s “Deadly Exchange” website, “The anti-Muslim, anti-immigrant, and anti-Black policies escalating under Trump and Netanyahu have their roots in longstanding U.S. and Israeli policy. Now, the current enactors of these oppressive policies are literally collaborating and learning from each other. That’s why we’re working to end these harmful exchanges.”

Among other incidents, JVP blamed Israel for influencing the death of Mike Brown in Ferguson, Missouri.

The website for the “Deadly Exchange” campaign points the finger at other Jewish organizations for their role in supporting the law enforcement exchanges:

These exchanges are organized by a range of governmental and non-governmental actors, but we were disturbed to learn that many are initiated by Jewish organizations, including the neo-conservative Jewish Institute on National Security of America (JINSA), Jewish Federations, the Anti-Defamation League, and even Birthright.

The “Deadly Exchange” website also accuses the ADL of trying to “undermine” the “joint struggle” of blacks and Palestinians, particularly in the aftermath of Brown’s death.

As Yiannopoulos wrote on his Instagram page after the NYU postponement, “As of today, I am without question the most censored man in America. The entire city of New York is terrified of one gay man stepping out of line and calling out the Left as the intolerant, censorious crybabies they are. And they just proved it—by censoring me again.”