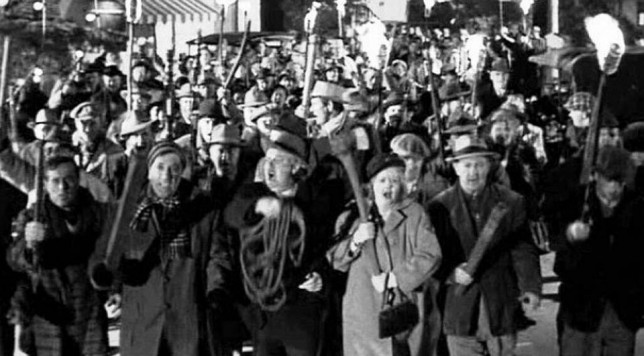 Violating the Left’s unspoken rule against attacking fellow leftists, MoveOn launched a broadside against Sen. Chuck Schumer (D-N.Y.) for daring to oppose President Obama’s botched nuclear nonproliferation deal with the terrorist-sponsoring Islamic Republic of Iran. In fundraising emails, MoveOn dishonestly labeled Schumer a war hawk and took the risible position that not supporting the deal will lead to war with Iran, a nation where leaders conduct “Death to America” rallies every day. “We didn’t stop the last war,” MoveOn declared. “We’ll all have to live with that—those of us who didn’t lose our lives to it. But we can stop this one.”

The Rev. Al Sharpton of National Action Network is urging black churches to organize support for the Iran deal. “We have a disproportionate interest, being that if there is a war, our community is always disproportionately part of the armed services, and that a lot of the debate is by people who will not have family members who will be at risk,” Sharpton said. As TruthRevolt observes, “with the poll numbers for Obama’s ‘Legacy’ foreign policy deal looking worse and worse for the administration, Sharpton apparently has decided that he needs to enlist the help of others to turn the tide.”

Although Congress rejected legislation to defund Planned Parenthood, a group that is at the very center of gravity of the American Left, the group’s problems aren’t over. New sting videos shot by the Center for Medical Progress keep popping up, showing PP officials doing things like poking tiny human baby organs on a Petri dish while they haggle over how much the organs will fetch on the market. In order to discourage organ-harvesting for profit, federal law forbids anyone from carrying out an abortion procedure aimed at preserving some fetal organs at the expense of other organs.

Incivility evidently pays: Since members of the Black Lives Matter movement loudly booed former Maryland Gov. Martin O’Malley (D) and U.S. Sen. Bernie Sanders (I-Vt.) and stormed the stage at a radical left-wing activists’ presidential candidates’ forum, the movement has enjoyed a renaissance, Politico reports. Although viewed initially as a “disastrous disruption,” the political theater at Netroots Nation in Phoenix, Ariz., has “supercharged the Black Lives Matter movement and pushed Hillary Clinton and her rivals … to speak to the concerns of an African-American community … enraged by high-profile incidents of police misconduct …” NAACP president Cornell William Brooks praised the disrupters. “We’re not having this conversation because [the protesters] haven’t been polite,” he said. “We’re having this conversation because the presidential candidates are not being sufficiently precise.”

Speaking of the NAACP, its longtime chairman Julian Bond died in August at the age of 75. He was also a co-founder of the Southern Poverty Law Center.

American Enterprise Institute scholar Mark J. Perry, a professor of economics at the University of Michigan’s campus in Flint, the home of mockumentary maker Michael Moore, reports that the $15 per hour minimum that appropriately took effect this past April Fool’s Day in Seattle is already claiming victims. The wage law, which Perry dubs a “government-mandated wage floor that guarantees reduced employment opportunities for many workers,” began a few months ago with an increase of the $9.47 an hour minimum to $11 an hour. As a result, restaurant layoffs in Seattle are already legion. The minimum rises to $15 by 2022. This policy makes “Seattle the first major city in America to take such an action to address income inequality.” It is also an “economic death wish,” Perry writes.