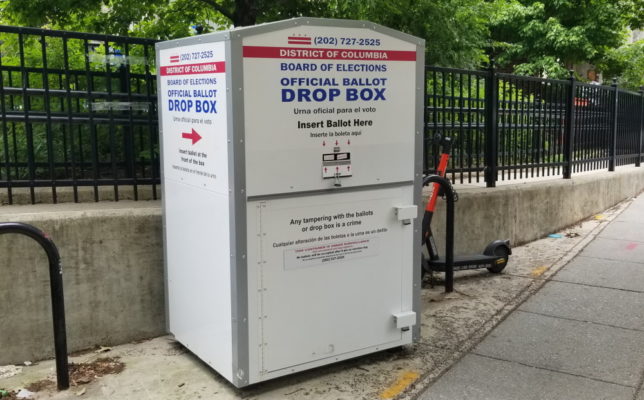 One of the most bizarre phenomena of recent American elections is seeing turnout swell to historic highs even as leftists scream “voter suppression.”

Conservatives are used to hearing that phrase trundled out to criticize any attempt at improving election integrity, but have they ever heard it defined? The League of Women Voters calls suppression “any attempt to prevent or discourage certain Americans”—invariably ethnic or religious minorities—“from registering to vote or casting their ballot.”

That seems clear enough, but how to measure it? Don’t look at turnout, explained Georgia gubernatorial nominee Stacey Abrams, the “voting rights” champion who told reporters in October that “turnout does not dispel voter suppression [because] suppression is about barriers to access.”

If it isn’t obvious what she means by “barriers to access,” get a copy of The Myth of Voter Suppression: The Left’s Assault on Clean Elections (Bombardier Books, 2022, 248 pages) by Fred Lucas. 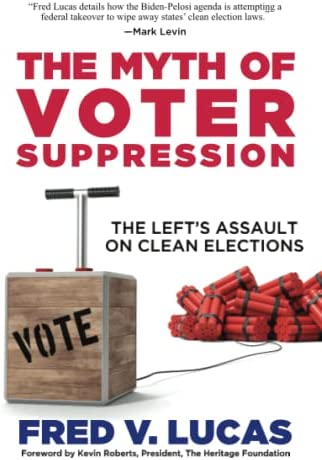 Lucas is a longtime investigative journalist for the Daily Signal, the news and reporting arm of the conservative Heritage Foundation. He’s written for dozens of outlets across the political spectrum on hundreds of issues, including election integrity—particularly since 2020.

“Voter suppression” is a meaningless but “politically loaded” term, Lucas explains, one that Democrats have engineered and retooled since at least 2006. That year the party set its sights on defeating Indiana’s voter ID law, only to see the Supreme Court uphold the law in a 6-3 ruling.

What is new is the attempt to take voter suppression alarmism national in what Lucas calls “a legal jihad” against America’s election system.

That hard-bitten campaign started with Stacey Abrams’s embarrassing refusal to admit defeat after losing the race for Georgia governor in 2018. But under President Joe Biden accusations of a nationwide conspiracy to enact racist “Jim Crow 2.0” under the guise of election integrity have become a plank in the Democratic Party platform. Their solution is a complete federal takeover of elections—a power grab that would mean bypassing the U.S. Constitution since it grants the states sole authority over elections.

Lucas pulls no punches, arguing that genuine voter suppression—and its cousin, voter fraud—date back to Aaron Burr, New York’s Tammany Hall, and the origins of the Democratic Party.

The Heritage Foundation’s Election Fraud database counts over 1,300 legally proven instances of voter fraud dating back to 1982, while evidence of voter fraud overturned the results of at least 27 elections since 1992—most recently in the May 2022 city council election in Compton, California.

“Vote denial,” which includes laws intended to prevent legally eligible voters from exercising his right to vote, has been illegal under federal law since the 1965 Voting Rights Act. So too fraud, which has been a feature of major city elections since the founding of the republic.

In one example, Democrats imported crates of fraudulent ballots into New York in a desperate bid to stop President Abraham Lincoln’s reelection campaign in 1864. Similarly, the total number of votes cast in New York City between 1868 and 1871 was 8 percent higher than its pool of eligible voters. Republican Sen. Matthew Quay curtailed the fraud only after conducting a thorough examination of the city’s voter rolls in 1888.

Soon Republican-led California and Massachusetts adopted the secret ballot, which further clamped down on electoral corruption. In both cases, Lucas writes, contemporary Democrats accused their opponents of suppressing votes.

In contrast, the legal-sounding term “voter suppression” is totally absent from United States lawbooks, which is why Lucas and other election experts call it a myth. But leftists at the William J. Brennan Center for Justice and other election “reform” groups rack up substantial political capital by labeling efforts to improve election security as “suppression,” while denying the threat of fraud.

Lucas recounts dozens of examples of the Left’s political machine in action. After the 2020 election, numerous (mostly Republican-led) states attempted to clamp down on unmonitored ballot drop boxes and strengthen ID requirements.

Georgia’s 2021 election overhaul legislation banned campaign operatives from offering food, bottled water, or other handouts within 150 feet of polls (something New York and Montana also prohibit). President Biden spun this restriction into the charge that Georgia Republicans made “it a crime to provide water to voters while they wait in line—lines Republican officials themselves have created by reducing the number of polling sites across the state, disproportionately in Black neighborhoods.”

Yet Biden’s home state of Delaware offers fewer days of early voting than Georgia, while California and New Jersey require an ID for absentee ballot applications.

Throughout the book, Lucas systematically documents the decrepit condition of many states’ voter rolls, which are replete with ineligible, dead, and double voters. He tackles the politically charged issue of ballot harvesting and trafficking, in which individuals gather and submit other voters’ ballots. The concern is less about family members collecting their relatives’ ballots than large-scale, well-funded organizations using paid traffickers to canvass specific neighborhoods. “As a rule,” he writes, “the old school machine politics states embrace this practice, and clean election states either ban it or curb it.”

The epitome of voting-laws-gone-wrong was the 2020 election. Lucas tallies up the problems: last-minute changes to early voting laws, no-excuse mail-in voting, nearly 15 million unaccountable mail-in or absentee ballots, and illegal drop boxes—many of them paid for by liberal billionaire Mark Zuckerberg via the Center for Tech and Civic Life.

Since then, Democrats have only doubled down on “voting rights” legislation that threatens to gut America’s elections. The now-deceased For the People Act (H.R. 1) would have legalized ballot harvesting nationwide, mandated vote by mail, enacted automatic and same-day registration, and undermined photo ID laws by allowing voters to sign sworn affidavits in lieu of proper identification.

One of the Biden administration’s first actions in March 2021 ordered federal agencies to begin registering new voters whenever Americans make use of government services—think Medicaid, Indian Health Services, student loans, and Obamacare, among others. Demos, a far-left think tank that supports DC statehood and abolishing the Electoral College, quickly claimed credit for the executive order.

The goal is to transform the federal government into the nation’s biggest get-out-the-vote machine for the Democratic Party. Demos’s operatives also pushed Biden to sic the Justice Department on conservative states for “restrictive voting procedures” that run counter to the Left’s vision for the country.

A vast web of powerful donors and foundations is bankrolling this campaign for permanent Democratic control. Lucas extensively documents the six- and seven-figure grants flowing from major liberal foundations to advocacy groups responsible for the Democratic Party’s raft of election “reforms,” such as the $1.7 billion “dark money” network run by the DC consulting firm Arabella Advisors.

So what’s the solution? Lucas believes that states must reassert control over elections and pass legislation blocking the Left’s worst proposals. That means banning private funding for elections, clamping down on vote trafficking, and passing robust voter ID laws in all 50 states. Lucas admits he’s “leery of federal legislation,” but believes that a “carefully-tailored national ban on vote trafficking” could be extremely effective. Perhaps more controversially, Lucas also supports scrapping the 1887 Electoral Count Act giving Congress authority to count and challenge Electoral College votes, since it “grants too much power to Congress.”

Whether the incoming Republican members of Congress heed The Myth of Voter Suppression and push such legislation remains to be seen. But anyone who sees the country’s dire need for genuine election reform ought to pick up a copy straightaway.