The Left’s intimidation tactics are starting to lose their sting. And we have Soros himself to thank. 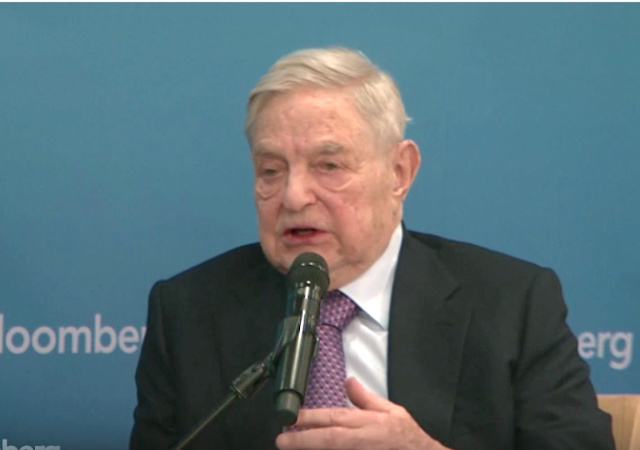 George Soros, the “man behind the curtain,” at 92 years young, is still making headlines, although arguably not very positive ones.  The mere mention of his name last week by Republican Senator Macro Rubio unleashed a flood of baseless allegations of anti-Semitism on Twitter and in the media. Soros, it seems, still inspires the left to defend his behavior in often despicable ways.

“What is a Soros backed prosecutor?,” progressives demanded to know, before immediately labeling it an anti-Semitic dog whistle.

False allegations like these have cheapened the meaning of anti-Semitism and have long been used to silence any talk of the Hungarian-born billionaire’s political expenditures, particularly his funding of left-wing “reform” prosecutors. The stifling effect was so strong in 2020 that former House Speaker Newt Gingrich was abruptly cut off on Fox News for daring to attribute the spread of riots across the country to the inaction of Soros-funded prosecutors. Fox later apologized, but it was clear, as Gingrich observed at the time, that the topic of George Soros was inexplicably “verboten.”

Thankfully, the Left’s intimidation tactics are starting to lose their sting. And we have Soros himself to thank.

An op-ed written by the man himself early last week titled “Why I Support Reform Prosecutors” severely declawed the Left’s attacks. It’s hard to make allegations of anti-Semitic conspiracy theory stick when the man under fire admits he’s doing the thing he’s accused of (although that didn’t stop many from trying).

In the article, Soros confesses he’s the godfather of the progressive prosecutor movement and declares he’ll keep the funding coming. Give credit where credit is due: Soros is clear about his intentions.

Left-wingers, however, willfully ignored the article, preferring instead to use the taboo they placed on Soros’s name long ago to shut down discussion of policy issues that make them look bad.

Support for Soros-backed prosecutors has left Democrats vulnerable, and they know it. Democrats boosted these officials’ campaigns, cheered for the reforms they promised, and marched hand in hand with the defund-the-police movement during summer 2020. Now that voters see the consequences of “reform,” Democrats are backpedaling as hard as they can, but they can’t succeed if people won’t shut up about the prosecutors they supported.

The solution: go on the offensive. Label any mention of George Soros anti-Semitic. But there’s a problem: Soros is so much a part of the radical prosecutor movement that talking about it without talking about the man behind it is like talking about the war in Iraq without mentioning George Bush. It’s simply not possible without grinding the conversation to a halt.

“Only anti-Semites are curious about what George Soros does with his money,” they claim, and nobody wants to be an anti-Semite, so nobody ever looks. Simple, but effective.

Even those willing to discuss Soros and the nationwide crime spree he’s funding must do it in a veiled way, with no guarantee of cover. Senator Rubio, for example, didn’t actually speak the name “Soros” at all (the reference to “Soros backed prosecutors” only appeared in a subsequent tweet). Instead he talked about rising crime rates, the flawed arguments left-wing prosecutors make, and actions that Justice Department could take to reign them in. None of that ever made the headlines. Yet Rubio’s speech was written off completely and buried under an avalanche of disingenuous smears because he had the audacity to name the man responsible.

That’s not to say that criticism of Soros is never anti-Semitic. There are certainly anti-Semites who obsess over George Soros and make him a punching bag for their hate. But the fact that hateful people also talk about something should not disqualify it from civil discussion entirely. This rule doesn’t seem to apply equally to figures like billionaire Sheldon Adelson and commentator Ben Shapiro, who are arguably more hated by anti-Semites than Soros. The Left holds nothing back when criticizing conservative Jews, and even makes a point of criticizing them for their support of Israel, yet somehow just saying Soros’s name in reference to something he admits doing is a bridge too far?

The progressive left is dedicated to canceling and censoring people and things that might deter the success of their preferred narrative: that they have the country’s best interests at heart.

But if George Soros keeps talking about his support of progressive prosecutors, the Left may be forced to censor Soros himself. One wonders how the man behind the curtain would respond to that.

This article originally appeared in Legal Insurrection on August 23, 2022.