Are New York’s Charter Schools Safer than Its Public Schools? 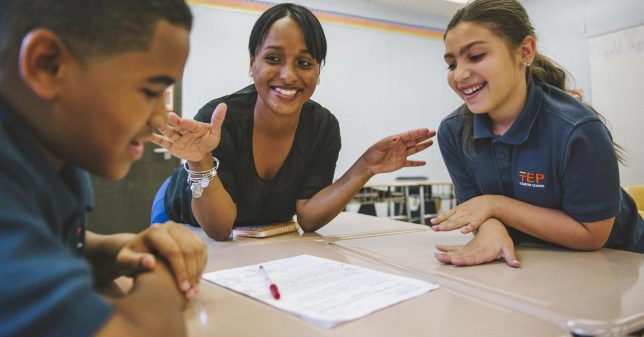 “If you want a safe school,” a new study claims, “opt for a charter.”

The findings by Max Eden and the Manhattan Institute compare responses from teachers and students at similar-level charter schools and public schools in New York City. They reveal something shocking trend: middle school charters are reportedly safer than their public counterparts.

Despite strong opposition from many in the city government and public school system, Eden says, charter schools have become a haven for parents who want to improve their children’s academic opportunity in a safe environment.

The study looks at an area within New York City where three public schools and charter schools serve similar grades. For middle schools and high schools, researchers created an average of each of the schools’ “safety” scores using their responses from six safety-related questions, such as

whether they feel safe in their classrooms and hallways, and whether they see fights, bullying, drugs and gangs as a problem.

For elementary schools, Eden relied on the teachers’ perception of order and discipline.

But public schools “display a depressing consistency,” he adds. “The more poor kids, disabled kids, black kids or Hispanic kids a school has, the less safe students there feel.”

Some in the anti-school choice camp—like the notoriously left-wing NAACP—might claim this as evidence of racial or socioeconomic bias within charter schools, but Eden disagrees. Charter schools don’t siphon off kids with higher test scores from their public equivalents, he says, nor do they exclude students with a history of disciplinary issues. Instead, they focus on keeping students on-task and busy learning, harshly disciplining the students who fall out of line.

In fact, New York City’s charter schools “have broken the link between poverty and school order.” The data shows that far from promoting social biases, “the higher the concentration of students in poverty at a charter school, the safer those students feel.” Even after controlling for disability and race the surveyed charter schools still higher safety levels than local public schools.

“[M]ostly, our students are too busy being academically challenged to act out,” says the superintendent of the Bronx-based Icahn Charter Schools network. But when they do, he says, the school’s administrators “sweat the small stuff and…make sure that [the] teachers are on the same page” so that the students “feel that consistency.” In any school, consistency in disciplinary standards is key. If officials and teachers are not on the same page, the students recognize it, and play to whichever side is more lax.

This consistency has fallen since the New York City Education Department created a rule requiring schools to obtain the department’s written approval before suspending students for insubordination – a near-impossibility in the city of 8.5 million. As one school principal put it, there’s

an unwritten rule, where schools know these suspensions aren’t going to be approved, so schools don’t put a whole lot of them through.

With the new rules in place suspensions plummeted – but so did school safety. Police reported 328 weapons that were confiscated from schools just from July 1 to September 30, compared with 222 for the same period last year – a 48 percent increase. In September, a student slipped one of these weapons (a switchblade knife) into a public high school in the Bronx, stabbing two of his classmates with a switchblade in front of the rest of his class and killing one of them.  It’s the city’s first school killing school in two decades.