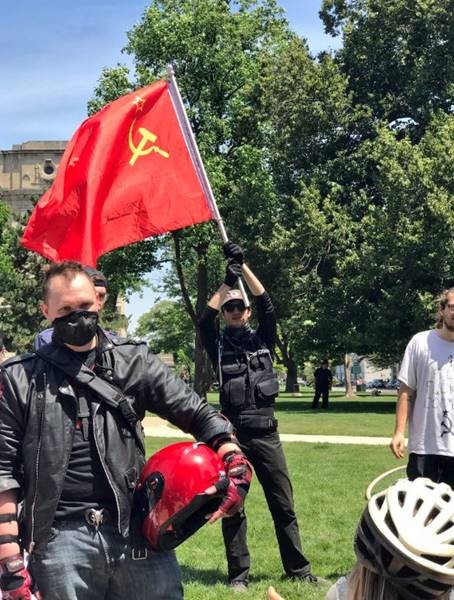 In “Antifa,” the latest film in CRC’s “America Under Siege” series, we expose how violence and intimidation form an integral part of Antifa’s (“anti-fascist action”) existence. The film exposes the communist roots of the left-wing terrorist movement, which has grown so powerful in some areas of Germany—particularly in the former communist east—that it has taken over entire towns. The “gang rule” imposed in Antifa strongholds has even intimidated police into compliance, and made it dangerous to express moderate or conservative opinions.

Antifa has attempted to do the same in the United States since President Trump’s inauguration. Its members regularly riot when so-called fascists—which for Antifa constitutes anyone to the right of Bill Clinton—hold rallies or give speeches. Frequently these end in violence against peaceful conservative demonstrators.

In a recent example of its intimidation tactics, an Antifa anonymously spread mugshots of Columbia University’s College Republicans (CURC) around campus and online.  The posters displayed the ominous message, “If you see these people tell them what you think.”

Cernovich’s presence is tainting enough in the eyes of Antifa, though. One member of New York City Antifa, the group responsible for the flyers, said they were simply giving CURC a dose of its own medicine:

If they feel threatened, I would ask them to consider the fact that people of color, immigrants, Muslims, LGBTQIA folks, etc. feel threatened to an infinitely larger degree every moment of their lives now.

This individual tried to justify the use of violence, claiming the entire American way of life is maintained through violence. The radical, who cowardly refused to reveal his identity, cited “US military action, police killing Black people, speeches by Mike Cernovich,” and even “paying rent” as examples of societal violence.

Many in left-wing academia bear responsibility for the violent victim mentality that persists among far-left groups like Antifa because their teaching often not only criticizes, but condemns capitalism.