Megadonors are funding the elections of progressive district attorneys across the country, and perhaps a crime wave, too. 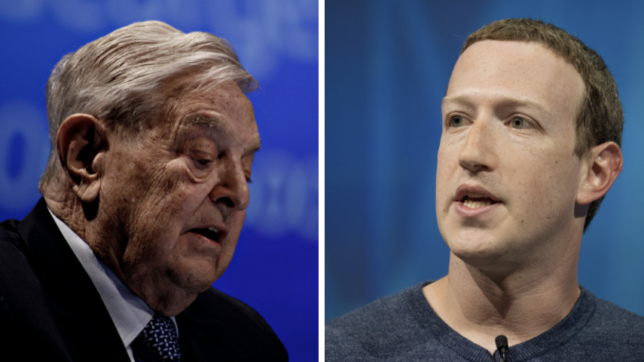 George Soros funding a new wave of radically lenient district attorneys across America to remake its justice system at the county level sounds like a right-wing conspiracy theory, but it’s true. He explained why he was going to do it in his recent book In Defense of Open Society. His commitment to the program was announced by the ACLU in 2015. And the financial record of the endeavor has been tracked by dozens of news outlets over the past several years.

The 90-year-old financier and megadonor laid out his case for nationwide criminal justice reform in the second chapter of In Defense of Open Society, itself an updated version of a 2012 essay. He cited such measures as one of the major objectives in his America-related philanthropy agenda.

In November 2014, Soros’s Open Society Foundation gave $50 million to the ACLU’s Campaign to End Mass Incarceration. The ACLU put out a press release about the donation, restating their commitment to cutting U.S. incarceration rates in half by 2020 in what would be “the most ambitious effort to end mass incarceration in American history.”

Shortly after making this donation, Soros began steadily contributing large sums to progressive candidates for district attorney (D.A.) positions all over the country. He has spent more than $18 million on left-wing D.A.s since 2015 with mostly successful results (only seven losses out of 29 races).

Meanwhile, dozens of “bail funds”—groups that pay the bails of suspects accused of crimes—made names for themselves during the Black Lives Matter protests after the killing of George Floyd. Kamala Harris promoted one such group, the Minnesota Freedom Fund, helping its annual revenue go from $100,000 in 2019 to $35 million in 2020.

Other big names include the Bail Project, which receives funding from Borealis Philanthropy, and the Fund for Fair and Just Policing, which is a project of Tides Advocacy and was founded with the support of the powerful private foundations Atlantic Philanthropies and Soros’s Open Society Foundations.

CZI’s recent giving to Tides Center criminal justice reform outfits included $610,000 to Californians for Safety and Justice, $500,000 to the Justice Collaborative, and $750,000 to the Public Rights Project. In January 2021, CZI boasted it had granted over $164 million to criminal justice reform advocacy groups just before announcing a new and independent organization, the Justice Accelerator Fund, to which it is entrusting $350 million.

The consequences of all these efforts to re-engineer the U.S. justice system at the local level are as one would expect.

As multiple data sets confirm, 2020 was a record year for violent crime. Preliminary FBI data show that murder rates went up everywhere in America in 2020, and not by a little—by 24.7 percent, if measured nationwide. Criminal justice expert John Roman said 2020’s surge “is the largest increase in violence we’ve seen since 1960, when we started collecting formal crime statistics.”

In Philadelphia, homicides have gone up 29 percent since April 2020, making 2020 the city’s most violent year in over three decades. Larry Krasner, Philadelphia’s district attorney who received almost $1.7 million from Soros in 2017, blames other forces, especially COVID-19 lockdowns closing hosts of programs—including public school itself—that normally keep young men off the streets and out of trouble. “I do not believe that people who have had the wisdom to elect progressive prosecutors all over the country, and increasingly, all of a sudden are going to get the stupids,” Krasner said, arguing that the universal rise in murder refutes critics’ “scapegoating” of new progressive D.A.s.

While Krasner is right that the spike in murder rates happened across the country’s cities in 2020, not just in cities with progressive D.A.s, the question remains whether D.A.s like himself have had a hand in the severity of the uptick. Local Democratic ward leaders who have refused to endorse Krasner for election maintain he is at least partly to blame.

Krasner’s argument would also hold more weight if 2020 murders were the only factor under consideration.

Statistics were indicating rising crime rates in the new progressive attorneys’ districts before the pandemic. A June 2020 report from the Law Enforcement Legal Defense Fund found shootings had gone up 18 percent in Krasner’s district since he took office. Overall violent crime rose 5 percent, and robberies went up 7 percent. John Creuzot of Dallas County, Texas, whose conviction rates are significantly lower than his predecessor’s, oversaw a 15 percent rise in violent crimes, a 27 percent spike in homicides, and a 13 percent rise in auto thefts in 2019.

Whether liberal prosecutors are to blame for the surge in crime cannot be absolutely proven; voters in local districts will decide that question for themselves. What is certain is that artificially lowering prosecution rates without addressing the underlying sociological factors that cause crime is not a real solution.

The crime continues to happen, punished or not, while the rest of the population suffers from the crime and from the poverty rates and social decay that produce the crime. A resultant crime wave may cause a reactionary political victory nationwide and a re-legitimization of tough policing in the short term, but the calls for justice against that hard policing will always return. In both instances the factors underlying crime are unaddressed. We have seen this time and time again.

It seems that progressives rarely link incarceration rates to poverty anymore. Judging by much of mainstream rhetoric, contemporary thinking on that matter holds that racism alone causes the phenomenon. It says that high crime rates in urban areas are a racist illusion, our laws are racist, and arrests are made arbitrarily and selectively. Therefore, if we were to fix our “racist culture” and put an end to our “racist justice system,” the whole problem would be solved and everything would be fine. This is typical of late progressivism, as it ceaselessly undercuts material reality in favor of narratives about prejudice.

Politicians attempted to reduce said poverty through the federal welfare programs launched during LBJ’s War on Poverty. But economic inequality in America has increased since then. Instead of focusing on the working class and the political power of labor, these programs focused on combining the rhetoric of identity with the welfare capitalism of postwar Keynesianism, themes we see dominating the political landscape today.

This allowed for jobs to be outsourced overseas, unions to be crushed, and monopolies to form all under the watch of a “progressive” ideological hegemony in the federal government. Rather than empowering the laboring classes, progressivism morphed into an ideological justification for placating poor masses, always growing in number, while allowing the oligarchy to pillage the country of every possible means by which the people could free themselves from poverty.

Hiring armies of cops to mercilessly oppress deindustrialized, impoverished regions of the country is not exactly an intelligent solution either. To lower incarceration rates and put an end to the private prison industry (whose lobbyists influence legislation that ensures their supply of inmates will not run dry), the political situation would need to allow for a reawakening of the American working and poor populations through robust economic security and the ability to lead less stressful, stable lives.

This would require unorthodox economic policies across the government to reindustrialize the country, transform the material existence of both the urban and the rural poor, and curb the power of the wealthy who perpetuate this obscene system. But as these solutions cut against the ideological line of the rulers, and are pettily hoarded by hostile political camps, they are unlikely to emerge under current conditions.

Billionaires like Soros and Zuckerberg are merely the latest actors to play the role of facilitating this tired progressive effort. But philanthropic capitalists like them do not have any kind of corrective oversight system that could redress their philanthropic efforts based on their results, so by nature they cannot solve the problem and will only make life more chaotic for everybody involved.

The chapter from Soros’s book cited above provides interesting insight into the minds of billionaire philanthropists. In it, he raises the question of why selfish individuals like himself would spend their money on such “selfless” philanthropic efforts. His answer is that it absolves moral guilt incurred from their egotistical business practices. Nevertheless, he complains that “financial repression” after 2008 has made it more difficult for international hedge fund managers to make money, while the demand for hedge fund managers’ philanthropy has increased—insisting all the while that it is only through the generosity of plutocrats that society can improve.

American progressivism, like all unthinking pragmatisms, tries to find can-do practical solutions to problems engendered by the very system whose constraints it conforms to—like trying to have the devil put out the fires of hell.

This article originally appeared in The American Conservative on April 27, 2021.