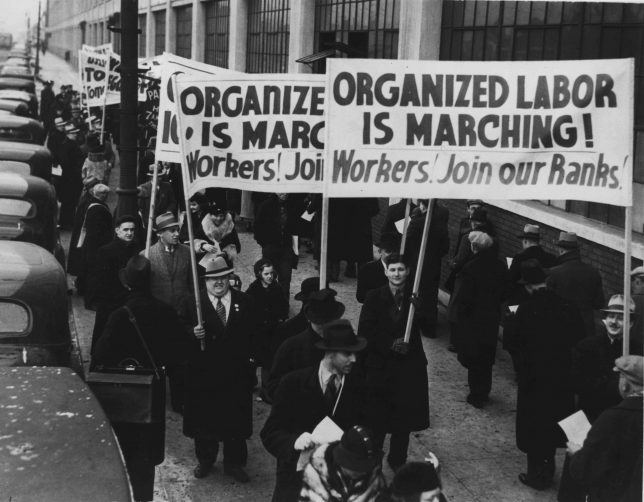 Strikers March at the Fleetwood Plant in Detroit. Image via Forbes, goo.gl/HgSo5j
by Daniel Lauer

Americans for Prosperity (AFP) has endorsed the Employee Rights Act (ERA) congressional legislation, signalling its support for enhanced workers rights and protections across the nation.

AFP joins a growing nationwide coalition of over 45 pro-employee organizations seeking greater job creation and freedoms for working Americans. In a July 13 letter to Congress, the coalition calls for the passage of the ERA, adding that the legislation would “allow American workers an unencumbered opportunity to make their voice heard on whether they wish to belong to a union.”

According to a 2016 report from the Heritage Foundation, just 6 percent of workers represented by a union nationwide actually voted for the union that represents them. The other 94 percent either voted against the union, or simply inherited a union that was voted in years ago. H.R. 2723 would ensure unions remain accountable to workers by requiring periodic recertification referendums after significant workforce turnover, asking workers if they wish to remain represented by their current union.

The letter also cites the growing number of union members who support the ERA. Some of the most influential members of the coalition include:

The ERA (H.R. 2723) would enact crucial changes to National Labor Relations Board rules containing some loopholes giving labor unions lopsided power and leverage over workers. The legislation would ban the ability of unions to coerce or threaten workers, and would establish federal supervision over intra-union leadership elections—eliminating the “card check” system, which forces members to declare their opinions during an election.

The ERA would enable union members to choose whether their dues can be spent on political advocacy. It would restore workers’ rights to withhold personal information from being shared by union campaigns.

If passed, the ERA could democratize union operations and return power to workers across America. CRC’s Dr. Steven J. Allen has identified glaring problems with many unions’ undemocratic operations in this CRC video on labor unions:

Update: The Wall Street Journal editorial board announced its endorsement of the Employee Rights Act on June 21. Read their article here.