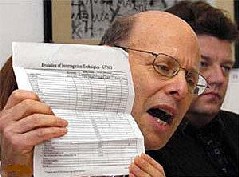 Michael Ratner (above, holding document) of the Center for Constitutional Rights rants against the country he hates most: the United States.

Much has already been written of the U.S. Supreme Court’s lawless, nonsensical decision in Boumediene v. Bush that gives America’s terrorist enemies unprecedented access to our civilian court system, but little has been written about the aggressively anti-American public interest law firm that helped to make it happen.*

The nonprofit Center for Constitutional Rights, which acted as co-counsel in the case, is deeply enmeshed in the politics of terrorism (take one guess on whose side) and has even taken money from groups linked to terrorism. CCR donors include the Ohio branch of the Council on American-Islamic Relations (CAIR), Safa Trust Inc., and the International Institute of Islamic Thought, all of which have been accused of connections to Islamist terror groups.

CCR is now jumping for joy, absurdly hailing the June 12 decision as a great triumph for the Constitution. (I profiled CCR two years ago, noting that the disturbingly effective group was at the forefront of the legal left’s push to give due process rights to America’s terrorist enemies.)

And yet the media doesn’t care to investigate CCR and its terrorist money trail, treating the fifth column law firm as a legitimate player in constitutional jurisprudence.

Media outlets’ descriptions of CCR are innocuous. Following the Boumediene decision, media described the Center as: “a public interest law firm that represented 37 detainees before the Supreme Court”(Baltimore Sun, no link); the firm that “has represented Guantanamo Bay detainees since 2002” (Washington Post); the firm that has “filed the first lawsuits challenging the detentions” (Houston Chronicle); and, as a firm that “supports habeas corpus cases” (Philadelphia Daily News).

The Center, founded by radical attorney William Kunstler in 1966, has spent more than four decades trying to obstruct U.S. foreign policy and is anything but innocuous.

The Center scored a major legal victory in 2004 when the Supreme Court ruled 6-3 in Rasul v. Bush that its clients, 16 foreign nationals captured during U.S. hostilities with the Taliban in Afghanistan, had the legal right to challenge their detentions in U.S. civilian courts.

CCR is now using the courts to pick the deep pockets of corporations in order to undermine national security and advance its foreign policy agenda. In one transparently vexatious lawsuit, the Center sued heavy-machinery maker Caterpillar, Inc., after an American protester was run over by an Israeli military Caterpillar D9 bulldozer on a mission in the “no man’s land” near the Egyptian border in 2003. CCR has also sued private contractors CACI International Inc. and Titan International for their alleged connection to prisoner abuse at Abu Ghraib prison.

The Center for Constitutional Rights is headed by Michael Ratner, a wealthy communist who wrote a book praising mass murderer Che Guevara. Ratner, who is brother of New Jersey Nets owner/eminent domain abuser Bruce Ratner and journalist Ellen Ratner, recruited hundreds of pro bono lawyers to represent those held at the U.S. naval base at Guantanamo Bay. He favors putting the U.S. on trial for war crimes but opposed doing the same to Iraqi dictator Saddam Hussein. “If you want any kind of sense of legitimacy or fairness, you can’t just go after Saddam Hussein,” he told “Democracy Now” in 2003.

Ratner has said Cuba’s “accomplishments” under Castro have been “great,” and has denounced the U.S. “onslaught against the Cuban Revolution,” and the prosecution of the Cuban Five, spies convicted in Miami in 2001. He calls the late President Ronald Reagan a murderer.

Ratner addressed an exercise in extremist political theater, the “International Commission of Inquiry On Crimes Against Humanity Committed by the Bush Administration,” at which he compared the president to Adolf Hitler and accused him of formulating a “plan for what has to be called a coup-d’etat in America.”

CCR also employs the granddaughter of the executed spies Julius and Ethel Rosenberg. The Rosenbergs, under the direction of the KGB, helped pass U.S. atomic bomb secrets to the Soviet Union. CCR publicly embraced radical human rights lawyer Lynne Stewart, a vocal supporter of Islamic fundamentalism who was convicted of providing material support for Islamic terrorists.

Surely such an interesting law firm deserves a critical examination by the media.

*(John Yoo had an excellent op-ed entitled “The Supreme Court Goes to War” in the June 17 Wall Street Journal, and on the other side the Washington Post‘s Dan Froomkin wrote a ridiculous, orgiastic, ahistorical ballad in which he grossly misrepresents the views of the Founding Fathers.)