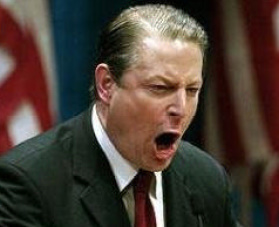 Al Gore, who famously claimed to have invented the Internet, now denies -in the face of powerful evidence to the contrary- that he is in a position to make an immense fortune from global warming-mitigation efforts.

Ian Wilhelm, a Chronicle of Philanthropy reporter, asked the private equity firm Generation Investment Management LLP (GIM) to respond to my previous post about Gore’s global warming profiteering. In the post, I noted that Gore’s nonprofit Alliance for Climate Protection plans to spend $300 million on an advertising campaign aimed at convincing the American public that they urgently need to embrace (economy-crippling) controls on carbon emissions and press politicians to act. Gore happens to be chairman and founder of GIM, a firm that invests money from institutions and wealthy investors in companies that are becoming environmentally-friendly, to use green parlance.

Wilhelm received what certainly seems like a snotty response. On behalf of Chairman Gore, GIM spokesman Richard Campbell said my statements were a “nonsense story.” Campbell said neither Gore nor any other members of GIM’s board will make a buck from the expansion of carbon trading. “To suggest then that they are somehow benefiting from the growth of this industry betrays a complete lack of knowledge of the carbon offset industry,” Campbell said.

But why on Earth wouldn’t Gore, as head of an investment firm focused on green products, want to make money from climate change mitigation efforts? It’s his job, and he is already deeply involved in the global warming business. He has enjoyed great success in business and made oodles of money for boldly seizing the initiative in a series of successful business ventures, including green ventures. He now has a net worth greater than $100 million. As Fast Company notes:

He has made an enormous amount of money and achieved positions of influence from technology to financial services to media. He and Tipper are even setting themselves up as angel investors for a few early-stage tech companies they believe in. In doing one end run after another around the status quo, he has created a new life: a perfect amalgam of environmental activism and a new type of capitalism in which there is more than one bottom line to consider, more than one master to serve.

Gore’s partner at GIM, David Blood, told MarketWatch last year that “we really are focused on delivering outstanding customer results for our clients. We’re also clear, avowed advocates on climate change or on sustainability.” The article also states that

Blood sees climate change creating an entirely new business stratum, he said, similar to that surrounding the so-called Internet economy — though he’d prefer that it bypass the latter’s bubble phase.

The way Blood and Gore are talking, they sure sound like they plan to make a lot of money off global warming.

And let’s not forget that Gore now makes $175,000 a speech. Are people paying Gore not to talk about global warming in his speeches? He sure isn’t making that kind of money for his oratory by enthralling crowds with fascinating tales from his time as Vice President of the United States, an office a previous holder once described as not being worth “a bucket of warm p—.” By comparison, the rhetorical gifts of both Dan Quayle and Walter Mondale go for a more affordable $30,000 (per speech), or less.

Gore, who won a Nobel Peace Prize in 2007 for his global warming Chicken Little routine, is the most famous environmental activist in the world. His (so-called) documentary, An Inconvenient Truth, won two Academy Awards and was one of the highest-grossing documentary movies of all time, earning $49.7 million at the box office.

Gore is also America’s most prominent advocate for legislated carbon emissions controls in the form of the so-called cap-and-trade system. In a cap-and-trade system, the government creates by fiat an artificial scarcity in the right to generate carbon emissions. The idea is that there would be a fixed quantity of carbon dioxide (CO2) production allowed and that businesses or industries that wanted to exceed their allowance (in order to do the things that make them money) would have to buy the unused portions of others’ allowances. These carbon credits could be traded on an exchange, as is currently done in Europe. When a financial instrument is traded in a market, people make money off it, whether directly or indirectly – investors, sellers, brokers, dealers, financial advisors – even investment executives like Al Gore.

As for carbon offsets, the U.S. market for such products and its attendant “feel-good hype” could be “as high as $100 million…up from next to nothing just a couple of years ago,” reports Business Week. If you consider that global warming only arrived on the scene as a major political issue relatively recently and that it may remain an issue for years, possibly decades, to come, it appears we are only at the beginning of what may turn out to be a long period of global warming consciousness-raising (to borrow a phrase from the left).

If CO2 limits become the law of the land –as John McCain, Hillary Clinton, and Barack Obama have all promised on the campaign trail– the market for carbon emissions rights will be huge as soon as the restrictions are signed into law. Of course the market for carbon offsets would probably grow exponentially.

There’s the article by Marc Gunther and Adam Lashinsky, “Al Gore’s next act: Planet-saving VC,” [VC stands for venture capitalist] that ran in Fortune on February 12, 2008. The subtitle is “The recovering politician is teaming with a legendary venture capitalist and bigtime moneyman to make over the $6 trillion global energy business.” The authors note that Gore has joined Kleiner Perkins Caufield & Byers. That venture capital firm says right on its website’s homepage that:

KPCB is actively working with entrepreneurs to solve our climate crisis. To accelerate our solutions, Al Gore has joined KPCB as a Partner, and KPCB has formed an alliance with Gore’s Generation Investment Management. The combined network, expertise, vision and global reach of Gore, Generation and KPCB will help our entrepreneurs change the world.

So, KPCB has hopped on Gore’s potentially very lucrative global warming bandwagon. Did Gore get involved with KPCB to not make money?

The Fortune article implies that GIM has invested in carbon trading companies: GIM “came across a small company engaged in carbon trading that [KPCB] is analyzing, and [KPCB] has shared intelligence about which startups could threaten the established companies in [GIM]’s portfolio.”

Gore has incredibly ambitious plans for the people of Earth. He wants to lead a revolution in how people and industry use energy and, in his own words, is calling for something “bigger than the Industrial Revolution and significantly faster.”

Gore proclaims: “What we are going to have to put in place is a combination of the Manhattan Project, the Apollo project, and the Marshall Plan, and scale it globally. It’d be promising too much to say we can do it on our own, but we intend to do our part.”

So, Gore flaunts his prowess as a savvy investor-entrepreneur by appearing in glossy business magazines, but when someone points out the obvious, that his business interests and environmentalist crusade overlap, he gets indignant?

(Note: A modified version of this entry has been posted to NewsBusters. Previously, a modified version of the original entry about Gore’s global warming profiteering was also posted to NewsBusters. For more information on Gore’s environmentalist business schemes, see “Al Gore’s Carbon Crusade: The Money and Connections Behind It,” by Deborah Corey Barnes, Foundation Watch, August 2007.)