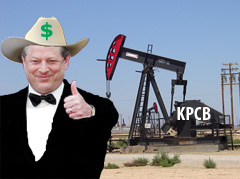 It was two weeks ago, that Al Gore challenged Americans to “move quickly and boldly to shake off complacency, throw aside old habits and rise, clear-eyed and alert, to the necessity of big changes” by jumping on his alternative energy bandwagon. In a much-hyped speech July 17, the former vice president urged the nation “to commit to producing 100 percent of our electricity from renewable energy and truly clean carbon-free sources within 10 years.”

Gore acknowledged that achieving his ambitious goal would be difficult: “To be sure, reaching the goal of 100 percent renewable and truly clean electricity within 10 years will require us to overcome many obstacles.”

“To those who say the costs are still too high: I ask them to consider whether the costs of oil and coal will ever stop increasing if we keep relying on quickly depleting energy sources to feed a rapidly growing demand all around the world,” Gore said. His activist group, the Alliance for Climate Protection, guesstimates that changing the nation over to so-called clean sources of electricity will cost up to $3 trillion over three decades.

Ironically, one of the many obstacles to “reaching the goal of 100 percent renewable and truly clean electricity within 10 years” is none other than the wily Al Gore himself.

That’s because even though he claims Americans must work to end their dependence on oil and must stop generating electricity using fossil fuels within a decade or face certain catastrophe, Gore continues to have a financial interest in fossil fuels.

Gore is a partner in Kleiner Perkins Caulfield & Byers, a venture capital firm. Kleiner Perkins, whose lead partner John Doerr also crusades for reducing the use of fossil fuels, pours investment dollars into green energy companies and not-so-green ones. An investment firm Gore chairs, Generation Investment Management, also entered into a partnership with Kleiner Perkins to “provide funding and global business-building expertise to a range of businesses, both public and private, and to entrepreneurs.”

Within the Kleiner Perkins portfolio are three companies knee-deep in the fossil fuel business. One is GreatPoint Energy, which plans to convert coal into natural gas. Another is the secretive Terralliance Technologies, which describes itself on its sparse website as “an oil and gas exploration and production (E&P) company.” Fortune reports that Terralliance “has already dug 100 wells around the world and is in the processing of raising additional capital.”

As Fortune reporter Adam Lashinsky notes, “It would be ironic, to say the least, if Kleiner’s first ‘green’ jackpot turns out to be a company that actually drills for oil.” [italics in original] (Here is a link to a New York Times article from last year about the fossil fuel investments of Kleiner Perkins.)

Kleiner Perkins is also invested in GloriOil, which Fortune reports “designs microbes that, when injected into oil wells, increase oil production and decrease use of water.”

It looks like Al Gore, the oilman who supposedly hates oil, has some explaining to do.