A New Policy Agenda for the “Regressive Resistance”: If You Can’t Beat ’em, Pack ’em 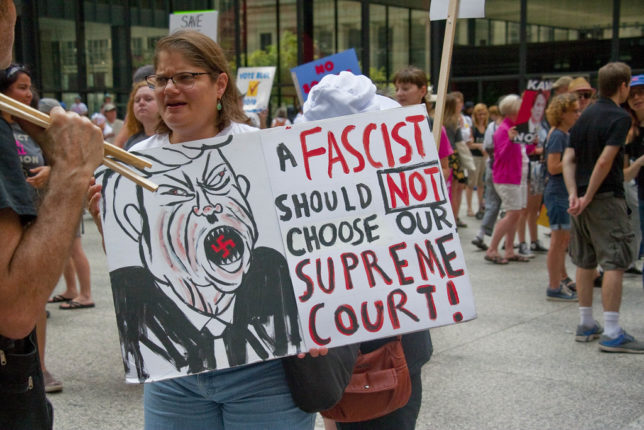 It isn’t just Article 1 that Democrats want to undermine. They’ve diversified their Constitutional contempt to include Article 3 of the Constitution. And they looked to no less a progressive icon than Franklin Delano Roosevelt for inspiration.

When, upon the retirement of Justice Anthony Kennedy, progressive Democrats realized President Trump would appoint not one, but two justices to the Supreme Court, activists and politicians like Rep. Mark Takano (D-CA) rallied supporters around the idea of a future Democratic president and Democratic Senate majority packing the Supreme Court. “Remember, Congress can add more people to that court,” Takano told emotional activists as Brett Kavanaugh neared confirmation to the highest court in the land.

Takano was absolutely right. Congress does have the authority to add—or subtract—seats from the Supreme Court. And the size, structure, and makeup of the judiciary has fluctuated throughout the course of the American experiment. The Constitution established the judiciary, but didn’t lay out specific provisions or structures. The Judiciary Act of 1780 established the original six-member court, as well as inferior circuit courts.

In the early years of the American Republic, lame-duck President John Adams and his waning Federalist Party increased the size of the judiciary and confirmed “midnight judges,” before Thomas Jefferson took office. By the end of Jefferson’s presidency, seven justices sat on the Supreme Court.

After the assassination of Lincoln, his vice president—a southern War Democrat, selected for his Tennessee roots—took office. Radical Republicans angry with Andrew Johnson’s approach to Reconstruction and opposition to the Fourteenth Amendment prevented him from appointing any justices to the Supreme Court by shrinking the court with the Judicial Circuits Act of 1866. After the election of President Ulysses S. Grant, Congress passed the Circuit Judges Act of 1869, which again fixed the Supreme Court at nine members, where it officially remains.

Of course, the Supreme Court fluctuations occurred as a new Republic was establishing Constitutional precedents and during the greatest Constitutional crisis in the nation’s history—the Civil War. But what occurred in 1937 had less to do with American statecraft or national security than an attempt to thwart established Constitutional limits.

In the midst of the Great Depression, Franklin Delano Roosevelt successfully campaigned for the Presidency against Herbert Hoover by promising Americans a vague “new deal” that included government funded public-works projects, financial regulation, and relief to farmers. The First New Deal established the Public Works Administration, the Civilian Conservation Corps, the Agricultural Adjustment Administration, the Securities and Exchange Commission, and the Federal Communications Commission.

FDR had more trouble with his sweeping new deals. He lost two more cases when the Supreme Court unanimously found that he wrongly terminated a member of the Federal Trade Commission and pushed through a law designed to grant relief to farmers at the expense of banks.

FDR, frustrated by successive losses, looked for ways to overcome the relative conservatism of the Supreme Court.

The answer was court packing.

The Judicial Procedures Reform Bill of 1937 suggested that the President appoint no more than six new justices to the Supreme Court for every justice over the age of 70, effectively creating a court of as many as 15 justices. Congress, at the time made up of conservative Democrats and progressive Republicans, immediately disliked the plan and subsequently stripped the bill of any provisions affecting the Supreme Court.

What modern-day court-packing advocates like Holder and Demand Justice Director Brian Fallon forget about Roosevelt’s failed plan to overcome one-third of the federal government is that it cost FDR enormous political capital. Sure, the Supreme Court began upholding New Deal legislation against similar challenges, but conservative Democrats with newfound Republican allies started to block fresh New Deal legislation in Congress. When he tried to pull the rest of his party further left by endorsing “New Deal Democrats” in primaries against conservative Southern Democrats, Roosevelt lost and an unofficial bloc called the “conservative coalition” formed in Congress.

Ironically, while this coalition opposed big-government bureaucracy and held the line on labor unions, it supported the President in his foreign policy, especially as the country entered World War II. Perhaps the lesson American history has for today’s illiberal Democrats is that the country will only tolerate such a violation of judicial norms while under direct and imminent threat from a foreign power.

The selection of Justices Neil Gorsuch or Brett Kavanaugh by President Trump does not compare with the crisis of the Civil War. Even during the Great Depression, Americans would not stomach such a naked play for unchecked power. Today, the only reasons progressives give for stacking the court rely on false claims of “stolen seats,” or the notional unpopularity of court decisions that hinder progressive agendas. They would seize power from two branches of government to upset the third branch, because they don’t like the checks and balances built into the Constitution.

In the conclusion of A New Policy Agenda for the New Left, learn how “the resistance” is railing against policies the Left used to like.