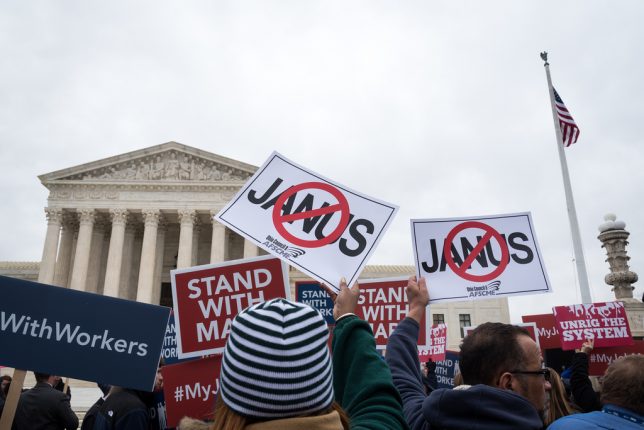 Currently, the United States Supreme Court is considering whether to end the practice of forced dues payments (known as “agency fees”) among government worker unions in a case titled Janus v. AFSCME. Central to the argument is the notion that anything a government worker union bargains over or advocates is fundamentally government policy, which the Court has long held that employees represented by unions cannot be forced to fund.

AFSCME national headquarters’ most recent annual report to the government (known as an “LM-2”) provides a fine example of how union spending works in practice. One item that stood out to us was a report of $500,000 in “Contributions, Gifts, and Grants” paid to The Film Foundation.

The Film Foundation is a charitable organization set up by Hollywood director Martin Scorsese for “protecting and preserving motion picture history.” So one wonders why a government worker union demanding the continued privilege to compel dissenting non-members to pay them agency fees would give contributions to an organization associated with a Hollywood celebrity worth an estimated $70 million-$100 million.

Offered free of charge to elementary and high schools, “Democracy on Film” is made up of eight modules addressing different aspects of the democratic experience, including immigration, labor, civil rights and the press. Within each module, scholars, educators and filmmakers examine movies that reflect American democratic ideals.

The project was announced at a panel discussion which included both Scorsese and Lee Saunders, president of AFSCME since 2012. The curriculum divides the history of film into eight “modules” focusing on different, mostly left-leaning identity groups, with lists of films which promote the left-of-center messages desired by Scorsese and AFSCME. This leads to one obvious quibble with the list of films: The module on “the American laborer” omits one of the greatest films on labor unions’ relation to workers of all time: Academy Award winner for Best Picture and number 19 on the American Film Institute’s “100 Years 100 Movies,” On the Waterfront. (We’re sure that omission has nothing to do with the fact that On the Waterfront chronicles a worker fighting the mafia infiltration of a longshoremen’s union in New York.)

This isn’t the first time a left-wing group has partnered with Hollywood to advance liberal interests. The California Endowment, a left-wing philanthropy, notably paid $500,000 to the Norman Lear Center at the University of Southern California to sneak pro-Obamacare talking points into television medical shows.