ACORN: We’ll Help You Get Away With Stuff 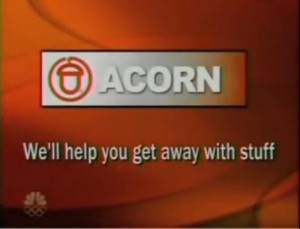 When ACORN has become the butt of jokes on TV comedy shows, you know that the times are a-changin’.

ACORN better start swimmin’ or it’ll sink like a stone.

…with the tone of a piece when I appeared on Stewart’s show in the fall:

This is a graphic illustration that people are finally beginning to understand what ACORN is really about.