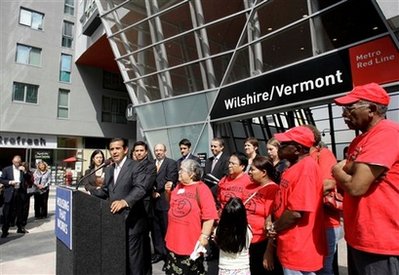 ACORN activists at the side of L.A. mayor

As the nation stares into the economic abyss precisely because of housing-related tomfoolery, Villaraigosa’s plan calls for $1 billion in government funds to be spent as part of the $5 billion housing project.

The mayor essentially admitted that his plan is insane.

“I know that budgets are tight . . . credit is almost nonexistent,” said the apparently psychotic Villaraigosa. “But we’re going to reject the cynics . . . and build a brighter future for those kids who are in the corner over there.”

Maybe Villaraigosa’s been using some of the same crack cocaine that ACORN has used to pay its operatives in its various voter registration drives.

And this isn’t the first time Villaraigosa has procured ACORN’s rent-a-mob services.

According to an LA Weekly report, ACORN received nearly $73,000 from an education-related pressure group founded by the mayor. The money went for campaign consulting services, travel and “meetings and appearances.”