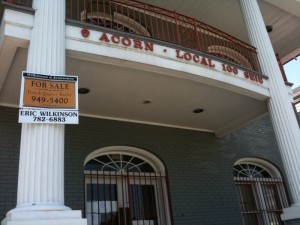 I broke this story exclusively on BigGovernment.com on Saturday:

A credible source claims the embattled left-wing advocacy group ACORN is poised to announce massive staff layoffs but an ACORN spokesman denies this is the case.

A credible source close to the Association of Community Organizations for Reform Now revealed that the activist network intends to lay off all staff members operating out of its New Orleans headquarters. All information provided by the source to this reporter in the past has turned out to be correct.

However, ACORN spokesman Scott Levenson of the public relations firm The Advance Group in New York City said the source was incorrect.

In an interview Friday afternoon with Levenson said (referring to BigGovernment.com), “You guys just can’t get it right. You’re wrong again.”

When pressed to elaborate, Levenson declined to do so.

Levenson received media attention earlier this year when Fox News host Glenn Beck ejected the combative publicist from his studio during a commercial break. Beck said at the time that Levenson accused him of being a racist.

My source said that one of the employees to be cashiered in the Crescent City is the daughter of disgraced ACORN founder Wade Rathke. Rathke’s wife, Beth Butler, also works for ACORN but it is unclear at this point if she too will be laid off. Rathke’s son also reportedly is employed by ACORN.

ACORN also plans to lay off two-thirds of its Washington, D.C., staffers as soon as Wednesday of next week, according to the source. Layoffs will also extend to ACORN’s affiliate the ACORN Institute.

The source also revealed that all or most of ACORN’s development staff in the group’s New York City office will soon be laid off if they haven’ been laid off already.

ACORN’s already tarnished image took a major hit last month when BigGovernment.com unveiled undercover sting videos in which ACORN staffers across America were shown advising a pair posing as a pimp and a prostitute on the finer points of avoiding prosecution for prostitution, importation of underage illegal aliens to serve as sex workers, obtaining government grants under false pretenses, and tax evasion.

The adverse publicity generated by the videos and the group’s never-ending scandals is slowly but surely drying up ACORN’s funding sources.