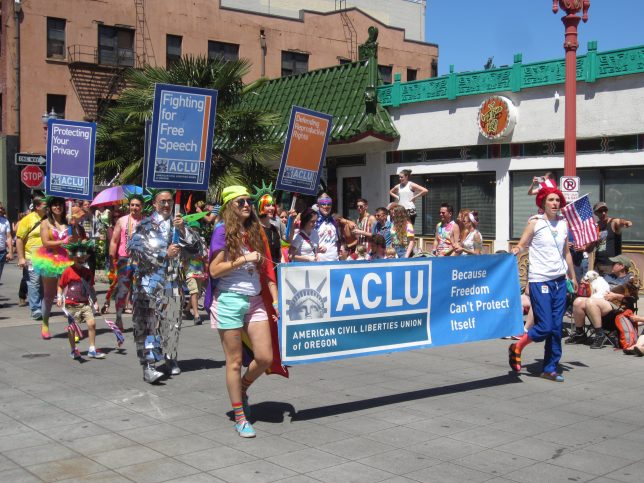 After a copy of the American Civil Liberties Union’s (ACLU) new internal guidance document for considering free speech cases leaked in late June, pundits have considered the civil liberties landscape and what sort of role the once-venerable institution will play in civil liberty cases to come. (The guidance appears to have been issued in large part due to the reaction of the public after the 2017 “Unite the Right” rally in Charlottesville, Virginia, devolved into a riot.)

The 98-year old 501(c)(3) organization has historically made no secret of its content-neutral approach to free speech. The group has the unique distinction of defending Ku Klux Klan (KKK) members who used vile language to advocate for violence against Jews and African Americans (Brandenburg v. Ohio) and defending Jehovah’s Witnesses in Georgia who wished to distribute printed religious material without a permit from the state government (Lovell v. Griffen). Regardless of your opinion about the ACLU now, the organization has earned widespread and begrudging respect—even from those who disagreed with the outcome of major cases—because of its sheer consistency on issues pertaining to Americans’ civil liberties.

But these new guidelines smack of a cultural change within the ACLU that threatens the very principles the ACLU was founded to protect. According to the first page of the guidelines:

Work to protect speech rights may raise tensions with racial justice, reproductive freedom, or a myriad of other rights, where the content of the speech we seek to protect conflicts with our policies on those matters, and/or otherwise is directed at menacing vulnerable groups or individuals. At the same time, work to advance equality may create tensions with speech and religious liberty, where equality demands require individuals or institutions to limit their speech or to act in ways that contradict their religious beliefs. Privacy safeguards may create tensions with protections for women in the domestic sphere. As a multi-issue organization, these conflicts are inevitable. We cannot eliminate them, but we can ensure that we consider them carefully and thoroughly.

To be fair, constitutional scholars can agree that the rights enshrined in the Constitution are coequal—that is, no one right can be considered more important than any of the others. This is one of the many reasons the Founding Fathers created an independent judicial branch. However, further reading of the ACLU case selection guidelines reveals a familiar refrain among illiberal groups which distance themselves from free speech:

We are also firmly committed to fighting bigotry and oppression against other marginalized groups, including women, immigrants, religious groups, LGBT individuals, Native Americans, and people with disabilities. Accordingly, we work to extend the protections embodied in the Bill of Rights to people who have traditionally been denied those rights. And the ACLU understands that speech that denigrates such groups can inflict serious harms and is intended to and often will impede progress toward equality.

Once again, identity politics complicates straightforward issues of free speech and equality before the law. It’s unfortunate that an organization with such admirable convictions and a reliable record is allowing today’s increasingly divisive political environment to tarnish nearly a century of sterling legal work.

The ACLU’s defenders argue that this leaked document doesn’t amount to a substantive change. It is “guidance” after all, and doesn’t come from the ACLU’s board of directors, the only body with the authority to change ACLU policy. But those who follow civil liberties and regulatory policy know that even seemingly benign “guidance” can amount to noticeable changes in carrying out actions.

Remember the (now retracted) 2011 “Dear Colleague Letter” the U.S. Department of Education wrote to nearly every college in the country instructing schools to crack down on reports of campus sexual assault? No laws were passed, no constituents were consulted—and yet, the letter compromised the due process owed to students accused of serious crimes.

In the ACLU’s case, this “guidance” provides a shield for the organization (it’s not an official policy change) while telling illiberal groups it considers clients—such as the J20 protestors—that the ACLU will walk back on free speech cases when such cases become politically inconvenient. For example, a few of the guidelines for selecting case criteria suggest considering:

There are enough loopholes in this guidance to allow creative and talented lawyers (such as those who work for the ACLU) to back away from inflammatory cases. What makes the guidance even more suspect to those disappointed in the ACLU is the guidance on free speech cases where speakers and demonstrators chose to exercise their right to bear arms while they also exercise their right to free speech. According to this guidance:

[T]he ACLU generally will not represent protesters who seek to march while armed. It is important that this content-neutral rule be applied without regard to a speaker’s political views. It should also apply whether or not state law permits or prohibits the carrying of weapons in a protest.

As a privately funded nonprofit organization, the ACLU is not required to take—or even capable of taking—every free speech case that has merit. In fact, the ACLU guidance uses the scarcity of its resources as another reason to consider declining to represent plaintiffs in certain cases. However, the ACLU set its own precedent for decades. The cultural shift within the ACLU makes clear that even if the Constitution doesn’t prioritize certain rights over others, the ACLU does.

Even as Democrats continue to manufacture reasons to disavow free speech and expression, the ACLU’s Cadillac funders like the Rockefeller Foundation, the Ford Foundation, and the Carnegie Corporation of New York should consider finding an alternative set of civil liberties litigators—ones who are prepared to defend civil liberties regardless of the plaintiff’s political values.