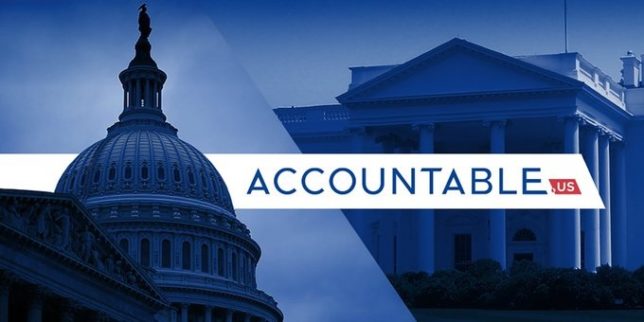 Against a backdrop of corruption allegations and partisanship, three “progressive” watchdog groups have formed Accountable.US to push back against corruption in the U.S government. This new “nonpartisan” nonprofit will focus on preserving accountability and transparency “in the Trump era and beyond,” according to the Huffington Post.

But Accountable.US’s formation by Allied Progress, Restore Public Trust, and Western Values Project demonstrates anything but accountability and transparency, much less nonpartisanship, given their connections to Arabella Advisors’ “dark money” network.

A Huffington Post article, written shortly after Accountable.US’s formation, mentions that all three watchdog groups have ties to the Arabella-managed nonprofit New Venture Fund and that Kyle Herrig, the current president of Accountable.US, is a senior advisor for all three. Herrig was also the director of New Venture Fund until Allied Progress’s formation in 2015. But the Huffington Post article does not mention that the “nonprofit charity” fund is a front for Arabella Advisors. Arabella operates a network of several nonprofits and financial projects that hide the flow of anonymous donations from equally anonymous donors to left-wing causes.

For more on the Arabella group, see recent CRC research on its “dark money” operations and its phony pop-up groups.

On its website, Allied Progress describes itself as “a watchdog organization that stands up for consumers by holding policymakers and predatory financial institutions accountable.” However, this message clashes with its position within the Arabella dark money network as a project of New Venture Fund. Its advocacy arm, Allied Progress Action, is also a project of Arabella’s nonprofit Sixteen Thirty Fund.

Allied Progress’s repeated attempts to obstruct and oppose the Trump Administration’s nominees undercuts claims of being “nonpartisan.” Among others, Allied Progress has opposed Mick Mulvaney as director of the Consumer Financial Protection Bureau (CFPB), and Steve Mnuchin for Secretary of the Treasury. In addition, both Allied Progress and Allied Progress Action have claimed responsibility for Andy Puzer withdrawing as the nominee for labor secretary in 2017.

The “nonpartisanship” extends to the other two watchdog groups. Restore Public Trust, formed in 2018, has focused solely on investigating corruption involving the Trump Administration and Republican staffers. Their lack of effort to investigate corruption on the left, despite the moniker of being a “formally a nonpartisan public-interest group,” was noted in a Daily Beast article. In fact, Caroline Ciccone, the current director of the group, is a former Obama administration staffer and the former communications director for the Democratic National Committee.

Western Values Project is an environmental advocacy group with a 501(C)(4) advocacy arm (Wester Values Project Action) owned by Arabella nonprofit Sixteen Thirty Fund. The project has pushed against Republican environmental policies and government officials, even claiming to have forced Ryan Zinke, former U.S. Secretary of the Interior under President Donald Trump, to resign in 2019, while currently targeting his replacement David Bernhardt.

To recap, three “nonpartisan” watchdog organizations, known for targeting Republican and Trump administration officials and staffed by Democratic-aligned members, have unified under the facade of a “nonpartisan” group to expose corruption within the government. In other words, they will continue going after Republicans, supported by the Arabella dark money network and refusing to reveal their own funding sources. The contrast with their claimed focus on transparency and accountability is enlightening, but not surprising.