A New Low — Even for Misanthropic PETA 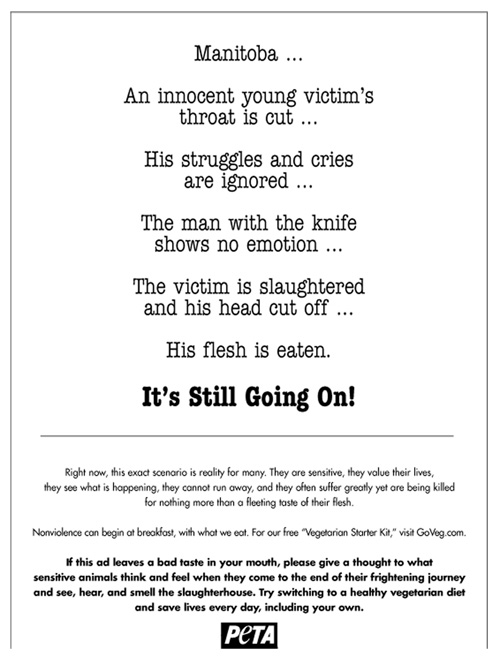 The above ad comes from the sick minds at PETA.

Not known for its sensitivity to human suffering, People for the Ethical Treatment of Animals (PETA) is now arguing that a chicken’s life is equal to a human being’s life. The group took the occasion of a brutal recent murder in Canada to make its case.

PETA seized on the crime, in which a passenger stabbed his fellow passenger and then beheaded him, to score cheap political points. As CBC News reports:

An animal rights group has posted an ad on its website comparing the recent stabbing and decapitation of a young Winnipeg man to how humans kill animals for food.

People for the Ethical Treatment of Animals said the advertisement is meant to make people understand how animals suffer when they are killed in slaughterhouses. The group posted the imageless advertisement on its blog site Wednesday.

“PETA’s ad…is meant to spur people to think about the terror and pain experienced by animals who are raised and killed for food. The group aims to demonstrate that animals – just like humans – are made of flesh, blood, and bone and deserve protection from needless killing,” said a statement on PETA’s website, also posted Wednesday.

Tim McLean, 22, was stabbed and then beheaded by a fellow passenger as the two rode an eastbound Greyhound bus across Manitoba last Wednesday. The man accused of second-degree murder, Vince Weiguang Li, allegedly engaged in cannibalism during the attack, which occurred just west of Portage la Prairie.

Designed using large, bold type, the ad compares McLean’s struggles to those endured by an animal being slaughtered for its meat. It then refers to Li’s alleged act of cannibalism before saying, “It’s still going on!”

On PETA’s website, the group compares the murder to “[t]he horror that cows, chickens, and pigs face on factory farms.” PETA explains that it created the ad “to make people rethink the proposition that it is, rightly so, a criminal act to kill and eat our own kind but that it’s ‘OK’ to kill every other species but our own and eat them.”

The group then adds insult to injury by accusing people who eat meat of contributing to violence.

For more information on the callous fanatics at PETA, read our previous reports:

“Cruel and Unusual: People for the Ethical Treatment of Animals,” by Iain Murray and Ivan Osorio, Organization Trends, January 2006;