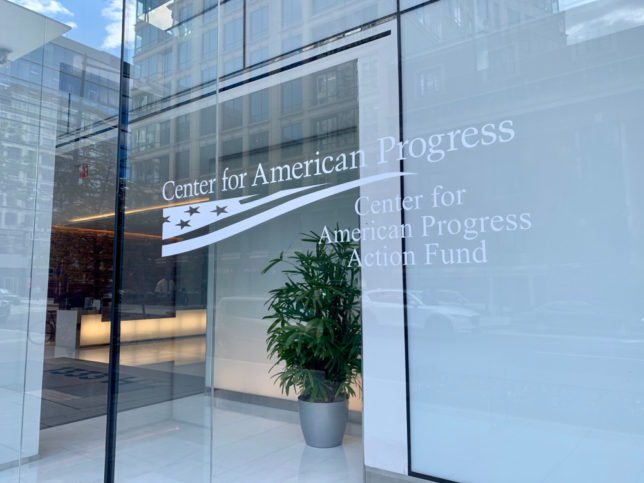 New York Times reporter Ken Vogel recently tweeted something that exemplifies what’s been happening on the foreign lobbying front, and why several congressional proposals to address it are being welcomed on both sides of the political aisle.

He’s referring to the Center for American Progress, an organization linked to nearly every big name on the liberal left. It’s also embroiled in a bit of a scandal for taking funding from UAE and then distancing itself in 2019, yet reportedly still maintaining ties as late as 2021.

The question is how much are Americans aware that their domestic, internecine political squabbles are being funded by foreign entities with interests of their own? And how much are universities and think tanks becoming de facto lobbying arms of foreign governments by taking funding from nations whose political ambitions may not match the interests of American citizens?

Congress has gotten serious about addressing this issue, as I wrote in a July piece in American Conservative magazine.

On the Senate side, one attempt to address the problem is to strengthen the Higher Education Act of 1965, specifically Section 117 dealing with disclosure requirements of foreign gifts and contracts. Republican Senators Tom Cotton, Bill Hagerty, Marsha Blackburn, and Tim Scott are all attached to the legislation they are calling the “Foreign Funding Accountability Act,” which, according to a joint release, will attempt to “combat malign foreign influence in American colleges and universities.”

Over on the House side, Republicans are also proposing a disclosure system for nonprofit think tanks (often attached to academic institutions) similar to the ones universities had before Biden caved.

Rep. Lance Gooden of Texas introduced the “Think Tank and Nonprofit Foreign Influence Disclosure Act” in March, which he said is an important first step in getting a handle on the “undeniably rampant corruption in the non-profit sector that must be addressed.”

Now The Nation is reporting on a new bipartisan bill that aims its transparency requirements squarely at nonprofits that have become “foot-soldiers for a range of foreign governments.”

The Fighting Foreign Influence Act, spearheaded by Rep. Jared Golden (D-ME) with the support of Rep. Paul Gosar (R-AZ), seeks to “implement a range of disclosure requirements, as well as a new series of bans on entities that have spent years gorging on illicit wealth.”

[T]he most innovative part of Golden’s bill would force all American think tanks and nonprofits to disclose any notable donations from foreign governments or foreign political parties. This measure is long overdue, not least since American think tanks spent the past few decades effectively transforming into foot-soldiers for a range of foreign governments—especially dictatorships seeking to access influential lawmakers for the sake of upending American policy. Such well-known think tanks as the Brookings Institution, the Aspen Institute, and the Baker Institute have spent years taking millions from autocratic and despotic governments, without any requisite disclosure requirements. The same goes for all manner of American nonprofits, from universities to cultural centers—including such entities as the Clinton Foundation, which has spent years acting as the go-to group for donations from foreign regimes and oligarchs.

On their face, think tanks and related nonprofits appear distinct from the broader lobbying apparatus that foreign governments turn to in Washington; as think tank executives claim time and again, their work focuses largely on research, rather than advocacy for any of the governments funding their work.

There has been a serious debate of late about how much Congress has tended to rely on agency rulemaking—most notably the discussion about the recent Supreme Court ruling on the EPA—as a way to avoid doing the job they were elected to do and actually write and pass legislation.

On the subject of foreign lobbying, with all these competing and overlapping bills, it looks like Congress is prepared to do the work.