A House of Labor Responds to Market Forces 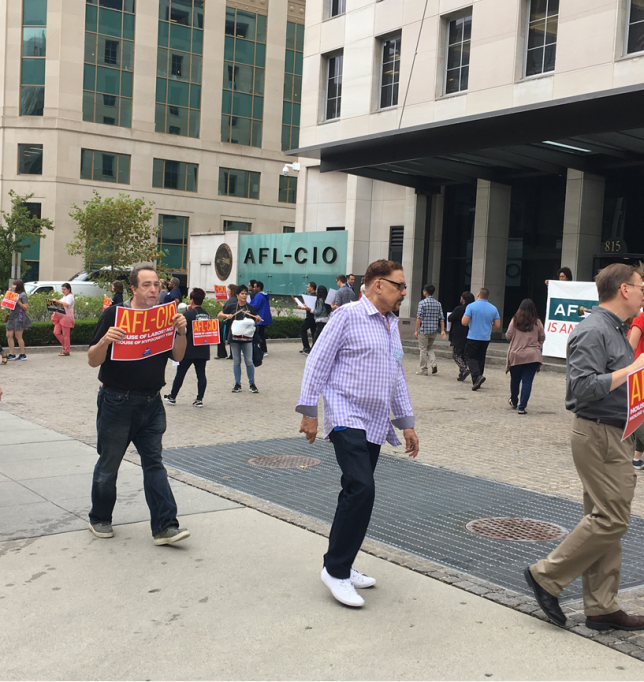 Members of the Office and Professional Employees International Union (OPEIU) led a picket on October 11 against their employer, the American Federation of Labor and Congress of Industrial Organizations (AFL-CIO), the nation’s largest labor union federation, at its headquarters in Washington, D.C.

In other words, a group of unionized employees picketed against their employer—which is also a union.

The protestors were made up of union support staff members—secretaries, janitors, and cafeteria workers—of OPEIU Local 2 opposed to the AFL-CIO’s recent contract proposal for its employees that went into effect on October 8, 2018. Protestors formed a picket line and showed their outrage by chanting that the AFL-CIO was “anti-union” and that OPEIU members were “under attack.” However, the AFL-CIO isn’t imposing any unreasonable contract amendments; rather, it’s adjusting to a market—something unions rarely have had to do in the past.

The AFL-CIO’s contract proposal lengthens its members’ work week from 32.5 hours to 35 hours per week, reduces sick leave, increases the probation period for new hires from 3 months to 6 months, and removes layoff protection for workers with ten years’ seniority, but it also includes three $1,250 annual bonuses.

If you aren’t in a union (like nearly 90 percent of the population), you may be confused with the group’s outrage concerning the employment contract offered by the AFL-CIO. A full-time work week is typically 40 hours, and many employees have a limited number of sick days. Probation periods for employees are not unusual either; they are usually used as a safeguard against under-performing employees. People in non-unionized jobs also aren’t guaranteed job security merely because they have seniority. In merit-based employment situations, one’s work quality, not seniority alone, typically affects an employee’s job security.

In reality, the OPEIU members’ protest can be chalked up to outrage that they have been given a taste of what work is like in the real world.

But why has the AFL-CIO established a new “anti-union” contract?

Some believe that the AFL-CIO’s proposal is a response to the Supreme Court’s decision in case of Janus v. American Federation of State, County and Municipal Employees (AFSCME). In that case, the Supreme Court ruled that it’s a violation of the First Amendment to require public sector workers to join or financially support a union through mandatory agency fees as a condition of employment, treating those fees as “compelled speech.” This decision gave workers the freedom to choose whether or not to support a union to represent them in labor contracts. Since workers will be free to drop union membership, the public sector unions within the 12.5 million-member AFL-CIO are almost certain to take a hit in membership, and consequently, in their dues.

Since these public sector unions now have to grapple with economic realities that they were insulated against before the Janus decision, one of the first moves unions are likely to make is to reduce expenses and long-term financial liabilities. The OPEIU should be impressed with the contract proposal’s gentle cuts, considering the alternative to addressing budget issues usually involves laying off employees.

The OPEIU isn’t being oppressed by the AFL-CIO’s proposed contract—it’s getting a little understanding of the labor market that almost everyone in America experiences. The true irony of the OPEIU’s protests lies in the AFL-CIO’s mission statement: “When working people join together, working people win.” The reality is that there are many people who simply don’t win in a union environment (just ask the OPEIU protestors or the thousands of Americans who were forced to participate in union activity). Once union protections and mandatory agency fees are removed, the union and its members are subject to market forces just like other organizations. Instead of protesting these realities OPEIU and the AFL-CIO should spend time and energy on providing valuable services to potential members—not manufacturing labor disputes.

Trey Conrad graduated from Liberty University in May 2018 with a degree in international relations and strategic intelligence. His favorite part of interning at CRC is honing his writing skills…
+ More by Trey Conrad