A Different Kind of Service

The healing efforts of Vets With a Mission

The organization formed in 1988. In January of 1989, VWAM began its first outreach project in a polio orphanage in Ho Chi Minh City. Credit: VWAM screenshot. License: https://goo.gl/vkaTTm.
by Cameron Vest

Summary: Some returning veterans of the Vietnam War find it difficult to fully come home from the battlefield. By returning to that war-torn country to help the South Vietnamese continue to rebuild, the nonprofit organization Vets With A Mission helps many former soldiers find healing through service.

The Vietnam War, even a half-century after the final, chaotic evacuation of Saigon that marked the end of U.S. military involvement, remains a difficult topic for many older Americans.

But if you were born in the 1990s like me, the Vietnam War is history, a distant event of no particular importance to daily life in the age of the Internet. What impressions I have of the conflict come from its portrayal in films like Apocalypse Now, snippets of ’60’s pop songs, and a few dry textbooks. Sure, the major dates were tossed into an AP history exam or two back in high school: If pressed, I can still rattle off the highlights—Guerrilla warfare, Viet Cong, Tet Offensive, protest marches, and violent political divisions at home; Lieutenant Calley and the My Lai Massacre.

I’m no military historian, but I can tell you what became clear to me about our war in Vietnam when I worked on Paladin Pictures’ By War & By God—an award-winning documentary directed by Kent C. Williamson and produced in partnership with Vets With A Mission (VWAM). I learned the Vietnam War makes an unsatisfying narrative. It’s a complex, half-forgotten story many Americans have eschewed in favor of a simpler one, in part because we can’t agree on why we lost the war in the first place, and in part, I hope, because we’re ashamed. We should be ashamed. And we should talk about why.

By War & By God and its accompanying podcast trace the stories of several Vietnam veterans from the moment they first heard about the war, to the moment they first set boots on the ground, through their tours and service, and their traumatic return Stateside. The difference between By War & By God and, say, a John Wayne war flick is that our film doesn’t end with our fighting boys safe and happy at home. As Chuck Ward, Executive Director of VWAM, observed: “It’s a difficult thing coming back from war, whether you did just a little bit or you were there for two or three tours. And when you come home it’s different, and you’re different.”

The difference between By War & By God and, say, a John Wayne war flick is that our film doesn’t end with our fighting boys safe and happy at home. Clip courtesy of Cameron Vest.

Now, imagine it’s 1975 and you’re on your way home. You’ve watched friends and enemies die horribly. You’ve been ambushed, shot at, bombed; you’ve done some shooting. You’ve protected your flag and your comrades with necessary violence and sometimes in ways that might gnaw at your conscience. But all that’s over with now. So you’re on the carrier USS Oriskany, approaching San Francisco Bay; almost home after years spent fighting for your country. The proud ship sails under the Oakland Bay Bridge, and you can see people with signs on the catwalks above. At first you think they’re friends and family members welcoming you home. But as you get closer you realize these are not friends at all, but antiwar protestors. Now you can see what’s written on their signs: They say things like “Baby Killer!” and “Welcome Home Murderers.” Suddenly muck of the most disgusting sort begins to fall on you: The protesters are actually dumping buckets of urine and fecal matter off the bridge! After all the grit and blood and bravery, after all those young lives lost on the battlefields of Vietnam in an attempt to keep the South Vietnamese free from Marxist-Communist oppression, this insult is what you come home to.

This story is not an embroidered fantasy, not a hypothetical. It’s Chuck Ward’s real story. And his words still sound a note of bewilderment after all these years: “How in the world do you treat people that way?” he said. “It was disgusting…I mean, talk about angry!”

Talk about angry, indeed. It boils my blood just to hear Chuck tell his story. So what does a returning veteran like Chuck do at that point? How do you talk about your service? In a country run amuck, where the average liberal doesn’t see returning heroes but baby killers, how do you seek the help that every returning veteran needs to readjust to civilian life? History tells us, sadly, that a lot of veterans didn’t readjust at all. Bob Peragello, another veteran interviewed for the film, says “All of us were emotional basket cases…[W]e were some of the first returning vets from the Vietnam War. I had a really messed up life for the next two or three years—drinking, carousing, fighting…just an angry, angry person.” Roger Helle, also interviewed, says of his own traumatic return home: “I was in an emotional, psychological wilderness of not understanding PTSD, not understanding survivor’s guilt. I was proud of serving my country, of being a Marine, so I wore that mask for about four and a half years…unfortunately my life began to unravel.”

Some veterans turned to booze, some to drugs. While suicide rates among Vietnam veterans are still debated, the Military Times reports that suicide rates among veterans in general are 21 percent higher than among the civilian population. A few vets, like Cal Dunham, “couldn’t shake the fact that [they] needed to be responsible in some way to help correct what war does.” That flash of inspiration led him, like other men profiled in By War & By God, to turn to faith to pull him through his dark night—and, because faith must be supported by deeds—to a different kind of service.

Vets With A Mission was the particular vision of Bill Kimball, who served with the 1st Cavalry as a Mortarman during the 1968 Tet Offensive. The organization formed in 1988; in January of 1989, VWAM began its first outreach project in a polio orphanage in Ho Chi Minh City. Bill’s overwhelming desire was to see American Vietnam veterans return to Vietnam to help in the rebuilding of a country that had suffered immense destruction to its infrastructure over the course of the war, and to minimize the effect of this destruction on our former South Vietnamese allies, and on all Vietnamese in general. In the official report of that first mission, VWAM states: “It was not unusual to see a tough former Marine with tears in his eyes, holding one of the [orphaned children] in his arms.”

Since its inception, VWAM has built thirty-two rural health stations or medical clinics in Vietnamese cities, established training programs with native doctors, worked with local churches, invested over $3 million in Vietnam, and sent over 2,500 veteran and non-veteran volunteers back to the country to help. “Vets go to Vietnam, with Vets With a Mission,” Chuck explains. “They meet their former enemy. They meet the people. And reconciliation comes full circle from the terrible memories of 1968 or 1969, to discovering the war is really over.”

Bill Steele—he’s also on the VWAM executive board— related a friend’s war experience which involved a pitched battle on the Mekong Delta where a number of his fellow soldiers were killed. During his VWAM “tour” of Vietnam the veteran had the opportunity to visit the remote location where that ambush had taken place. Upon returning from the combat zone, Steele says, his friend immediately called his wife. Toward the end of the conversation she said: “You’ve just said the four sweetest words I’ve ever heard from you.” The friend thought about this for a moment: “But I just said three words: ‘I love you.’” “No,” his wife replied. “You said something else. You said, ‘My war is over.’” 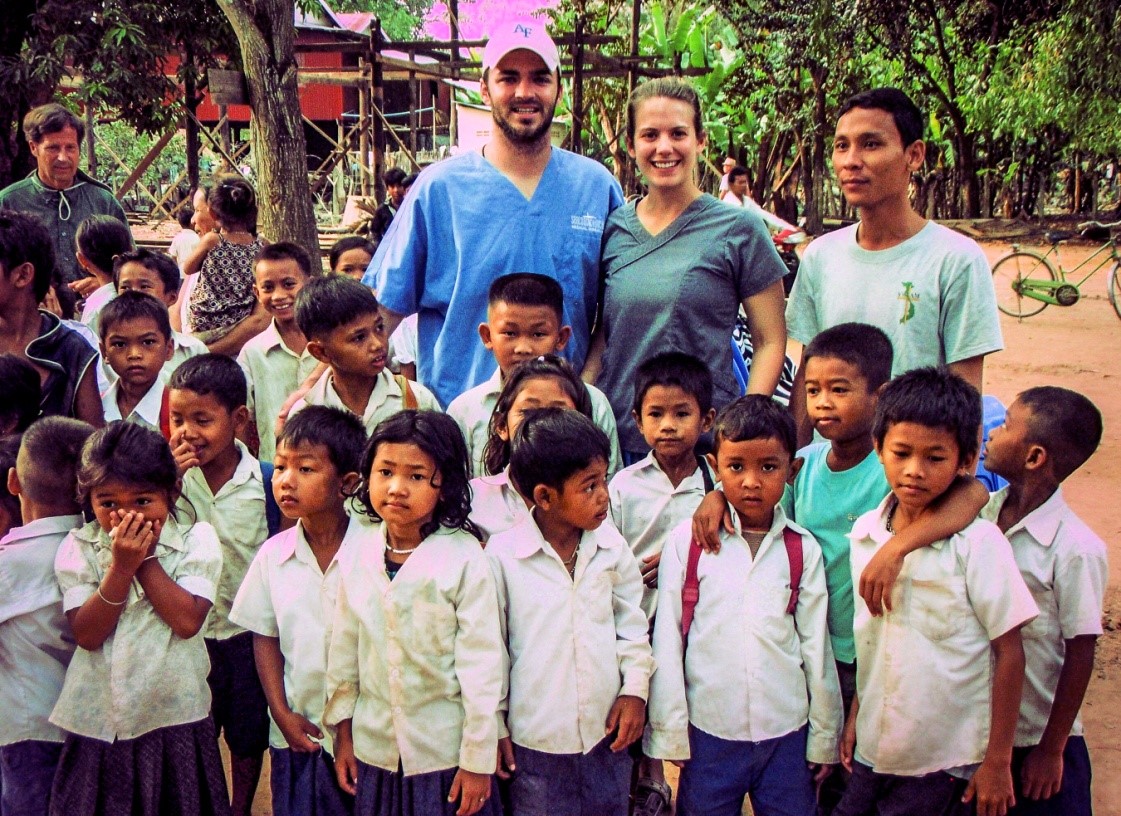 The stories these vets tell about their military tours in Vietnam are often emotionally wrenching. But the stories they tell about their “Second Service” in that country are something else entirely. Bob Peragallo tells of sitting down to dinner with members of the Vietnamese People’s Committee and a small group from VWAM. He describes meeting Mr. Som, President of the People’s Committee, who had a wooden leg, having lost his real one to machine gun fire in the war. Mr. Peragallo says:

“And I told the interpreter, I said, ‘Will you tell Mr. Som that I was a machine gunner?’ The interpreter didn’t want to do it. And, you know, it got real quiet and everybody got hushed. And the Vietnamese around us didn’t know what was going on. Finally, I said, ‘tell him.’ And so he told Mr. Som that I was a machine gunner and that I served in the Que Son Valley with the 9th Marines. And I looked over at Mr. Som, and he smiled and kind of grinned a little bit. Then I told the interpreter, I said, ‘I’d like to tell Mr. Som that I might have been the one that shot his leg off. But I want Mr. Som to know and understand that the war is over, and at one time we could have been, and probably were, former enemies engaged in combat. But now we’re here together, working together to improve the quality of health care for his commune.’ And Mr. Som stood up and he shook my hand. And Mr. Som hugged me.”

By War & By God, VWAM, and the work of these veterans in Vietnam all hinge on just that kind of redemptive moment: there’s the enemy combatant embracing an American soldier; that soldier returning to the scene of former trauma in the name of service. Since the legacy of the Vietnam War is, fundamentally, an unsatisfying narrative, VWAM has been founded to shape it into a redemptive one. Chuck describes those dinners with former enemies as “tense” at first, but “by the time that dinner is over…men who would’ve never thought of talking to one another [are] talking about their children, saying, ‘let’s have a beer together, let’s get in touch, let’s keep in touch.’”

I stated earlier in this essay that, as a nation, we ought to be ashamed about the Vietnam War: Yes, we ought to be ashamed of the way many in our country treated its veterans returning from the crucible of war. But shame is not enough. The caring veterans of VWAM found a greater humanity; a humanity that manifested itself in the desire to serve again, over and above the incredible military service they had rendered so long ago.

We can still learn from these men. Don’t be that protester on the Oakland Bay Bridge, bucket of night soil in hand. And don’t be quiet. Reach out. Watch our film, available on Amazon Prime. Listen to the podcast at ByWarandByGod.com. Visit VetsWithAMission.com. Donate whatever you can—money, time, words of support and encouragement, but most of all the latter. Support those now serving, and those who have served. Serve however you can. This is a call to action. As Chuck said: Get in touch. Keep in touch.

Cameron Vest works with Paladin Pictures on By War & By God in Charlottesville, Virginia.

Cameron Vest works with Paladin Pictures on By War & By God in Charlottesville, Virginia.
+ More by Cameron Vest