A Darker Shade of Green: Environmentalism’s Origins in Eugenics 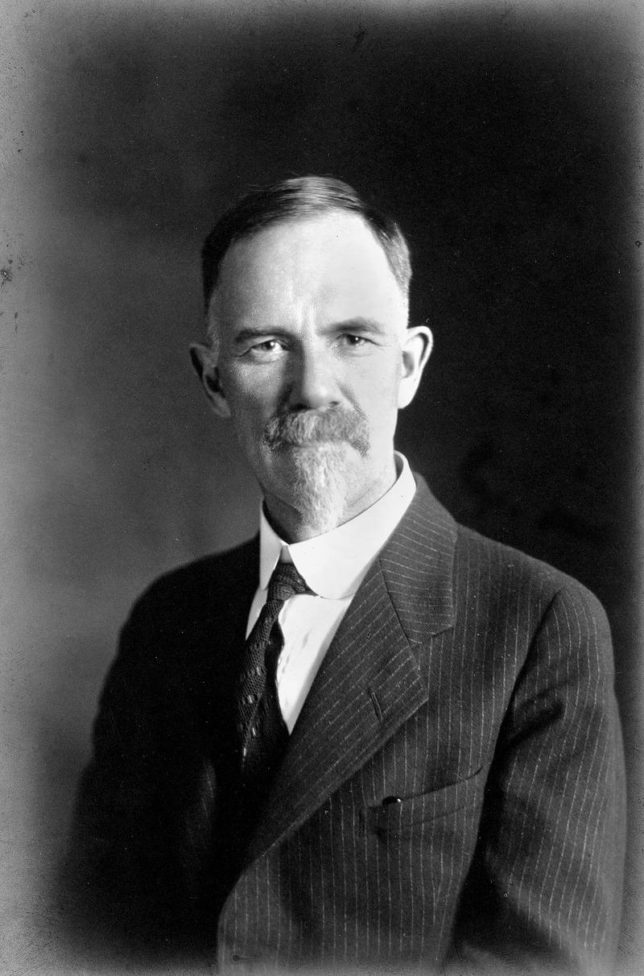 This is the first article in a series about the intellectual history of the modern environmental movement.

Jailing people who disagree with official public policy is the stuff of dictatorships. If some on the environmental Left get their way, though, so-called “climate change deniers” may find themselves in very hot water.

In the wake of last year’s deadly Hurricanes Harvey and Irma, a number of left-wing groups took the position that so-called “climate change deniers” ought to be imprisoned. “Put officials who reject science in jail,” tweeted Brad Johnson of the super PAC Climate Hawks Vote. “Climate change denial should be a crime,” wrote the Outline, an online publication, so that “profiteers and ideologues” can’t be allowed “to place the public in danger without consequence.” Then there’s The Nation, which squealed that “climate denialism is literally killing us.”

Toying with tyranny doesn’t end with them, though. The Wallace Global Fund, a major left-wing funder, dedicates an entire page of its website to the conspiracy theory of “climate crimes,” alleging that malicious oil and gas industry executives are responsible for a “certain cost of planetary instability and irreparable harm to future generations.” And Reinhold Gallmetzer, an appeals counsel to the International Criminal Court, even argued on the U.N. Environment Program’s website that “taking illegal [carbon dioxide] emitters to court is a very cost-effective way of helping to achieve the goals of the Paris Agreement,” the 2015 global warming “treaty.”

Not every environmentalist wants to criminalize global warming skepticism. But this kind of reflexive authoritarianism isn’t new to environmentalism—it’s at the core of the movement. The environmentalist movement of the 1960s was born in the ashes of the eugenics craze, the period from the 1890s to the 1940s when Progressives attempted to remake America by preventing the genetically “inferior” from having children.

Eugenics was embraced by Progressives and many liberals as the way of the future. Take famed liberal economist John Maynard Keynes in his 1926 book The End of Laissez-Faire:

The time has already come when each country needs a considered national policy about what size of population, whether larger or smaller than at present or the same, is most expedient. And having settled this policy, we must take steps to carry it into operation.

Or the words of the Left’s lionized Supreme Court Justice, Oliver Wendell Holmes, Jr., who upheld forced sterilization in the 1927 case Buck v. Bell. “It is better for the world,” Holmes famously wrote, “if instead of waiting to execute degenerate offspring for crime, or to let them starve for their imbecility, society can prevent those who are manifestly unfit from continuing their kind.”

The key to understanding eugenics is its emphasis on controlling the population. This premise of population control rests, however, on two key questions:  Who is allowed to reproduce? And when is that acceptable?

The Tyranny of “Race Betterment”

As PBS notes in its recent documentary, The Eugenics Crusade, eugenics—a word meaning “good stock” or “well-born” in Greek—was first formulated by the British polymath Francis Galton, drawing on his half-cousin and friend, Charles Darwin. Much of Galton’s work was eventually subsumed into that of the American biologist Charles Davenport, who founded an entire laboratory on Long Island, New York, in 1904 dedicated to studying the laws of heredity uncovered by the 19th century monk Gregor Mendel.

As the documentary notes, Davenport soon expanded his focus to improving the human race by controlling human reproduction. His work caught the attention of the Carnegie Institution of Washington (now the Carnegie Institute for Science) and the Rockefeller family, who funded his newly minted Eugenics Record Office on Long Island beginning in 1917.

In 1906, Davenport founded the Race Betterment Foundation in Battle Creek, Michigan, with funding from John Harvey Kellogg, the inventor of corn flakes cereal and brother of W.K. Kellogg (whose W.K. Kellogg Foundation is today a major left-wing funder). The organization’s goal was ensuring that only individuals with the proper racial pedigree had children.

Eugenics died out in the U.S. with the eruption of World War II, but it gave rise to a broader ideology that continues to exist today: population control. And as the documentary admirably notes, perhaps its most successful luminary was Margaret Sanger, a eugenicist, white supremacist, and founder of that pillar of population control, the American Birth Control League—later called Planned Parenthood, something the documentary failed to mention.

Sanger was an early advocate for birth control, which she quickly wedded with eugenics in order to advance a common goal—reducing the number of “undesirable” people in the country. Sanger cited papers by the Eugenic Research Association when she testified before Congress in May 1932. She was also the “main organizer” of the first World Population Conference in Geneva, Switzerland, in 1927 (a series of conferences that continued until 1994).

To Sanger and her followers, population control was at the heart of the birth control fight. She aligned herself with the Malthusian League, a British society that advocated for contraception as the solution to “overpopulation and poverty.” As Sanger wrote in the New York Times in 1923:

Birth control is not contraception indiscriminately and thoughtlessly practiced. It means the release and cultivation of the better racial elements in our society, and the gradual suppression, elimination, and eventual extirpation of defective stocks—those human weeds which threaten the blooming of the finest flowers of American civilization [emphasis added].

Margaret Sanger’s legacy—the Planned Parenthood Federation of America—still practices what she preached in her 1922 book Pivot of Civilization:

. . . the most urgent problem today is how to limit and discourage the over-fertility of the mentally and physically defective. Possibly drastic and Spartan methods may be forced upon American society if it continues complacently to encourage the chance and chaotic breeding that has resulted from our stupid, cruel sentimentalism.

Sanger’s war on “stupid, cruel sentimentalism”—better known as parenthood—inaugurated what is euphemistically called “family planning,” which often targets developmentally disabled babies. In February, Planned Parenthood and the American Civil Liberties Union (ACLU) sued Ohio in order to block legislation signed into law by Republican Gov. John Kasich which would ban abortions of unborn children with Down Syndrome. In 2016, the groups sued the state of Indiana for a similar bill blocking the abortion of unborn babies with Down Syndrome.

What’s the ultimate goal of striking down such laws? The answer may lie in Iceland, where it was reported in August 2017 that the country was taking steps to “eradicate” babies born with Down Syndrome through “heavy-handed genetic counseling” and easy access to abortion, according to an Icelandic genetics expert.

Down Syndrome is one of the most common genetic conditions a child can be born with. According to the National Down Syndrome Society, roughly one in every 700 babies born in the U.S. has the condition. Those babies face a herculean battle just to be born: as much as 30 percent of Down Syndrome pregnancies result in miscarriage or stillbirth.

In the United States, 67 percent of positively diagnosed babies are aborted. In France, that rate is around 77 percent. In Iceland, the statistics are even more shocking. Since prenatal screening tests were introduced in the country in the early 2000s, according to a CBS report, nearly 100 percent of women whose children are reported as having Down Syndrome choose to terminate their pregnancy. It’s so bad that in May conservative columnist George Will—not normally given to hyperbole—called Iceland’s policy “genocide.”

Sanger’s horrific legacy aside, Planned Parenthood’s biography of its founder attempts to frame eugenics as a cross-ideological white conspiracy instead of a Progressive policy, claiming that “eugenics was embraced across the political spectrum, from conservatives to socialists” and scrupulously remarking that “eugenicists . . . were largely white.”

It is true that leading eugenicists—like Sanger—were white. It’s also true that many, though certainly not all, of their victims were non-whites. Those crimes, however, were largely perpetrated by leftists who worshiped at the altar of state power and utopianism, not conservatives who supported individual liberty.

Sanger, a member of the Socialist Party of America (today the Social Democrats USA), was only a part of the broader Progressive movement, which advocated for collectivism to solve social problems—real or imagined. Perhaps no one has said it better than Supreme Court Justice Ruth Bader Ginsburg in a 2009 interview with the New York Times regarding the Court’s 1980 decision to uphold the ban on federal funding of abortions:

Yes, the ruling surprised me. Frankly, I had thought at the time Roe [v. Wade] was decided, there was concern about population growth and particularly growth in populations that we don’t want to have too many of. So that Roe was going to be then set up for Medicaid funding for abortion.

To be fair, Justice Ginsburg told the Times that the 1980 decision showed her that “my perception of [Roe’s original role] had been altogether wrong,” meaning she later realized that population control schemes weren’t at the heart of the Court’s 1973 decision to mandate legal abortion in Roe v. Wade. Neither does Ginsburg appear to advocate for such measures.

Nevertheless, Ginsburg’s initial assumption that abortion rights were more about population control than women’s health is revealing: abortion, like environmentalism, is about power.

In the next installment of “A Darker Shade of Green,” we examine how racists on the Left lobbied for racial quotas in U.S. immigration policy.