A $10 Trillion Plan to Save America from the “Climate Crisis”? 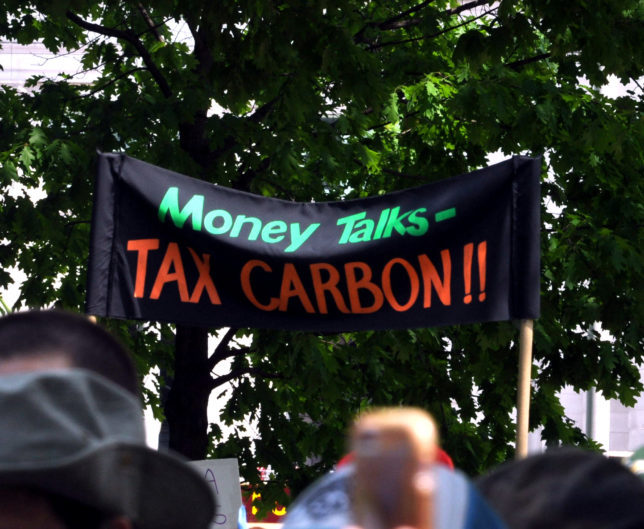 Saving America from climate change will cost the nation $10 trillion—or about half of the United States’ $20 trillion gross domestic product (GDP) last year.

That’s the gist of the plan proposed by 2020 Democratic presidential candidate Sen Kristen Gillibrand (D-NY), anyway. The New York Senator outlined her “plan to tackle climate change” in bold strokes last week in response to a cluster of catastrophes: flooding in the Midwest, wildfires in the Pacific coast, and melting polar ice caps.

“Climate action should be this generation’s moonshot,” she declared, requiring the “energy, talents, and commitments” of every farmer, worker, scientist, and entrepreneur in America.

But there’s a problem: Gillibrand’s climate change “moonshot” is a $10 trillion torpedo to the roaring U.S. economy, aimed squarely at hundreds of thousands of American jobs. The plan hinges upon a $52 per metric ton carbon tax levied on fossil fuel producers (presumably oil, coal, and natural gas). That means that for every metric ton of so-called “greenhouse gases”—mostly carbon dioxide—companies emit, they pay the government a $52 tax. Team Gillibrand expects the tax to raise $200 billion annually.

$52 per ton may not seem like much—that’s less than the cost of a full tank of gas for a typical SUV, depending on where you live—but there’s more here than meets the eye.

Consider the effects of a similar carbon tax proposed last July by Republican Rep. Carlos Curbelo (FL). Under Curbelo’s plan, the government would institute a $24 per metric ton carbon tax—less than half that proposed by Sen. Gillibrand. The result: a family of four could see its annual energy bills rise by over $1,000.

The center-right Competitive Enterprise Institute estimated that the Curbelo carbon tax would have cost Americans nearly $950 billion over a decade, or more than half the $1.5 trillion taxpayers saved in the 2017 Trump tax cuts. It gets worse: the Tax Foundation estimates that a $20 per ton carbon tax would result in a 0.8 percent GDP loss and the elimination of 425,000 jobs.

Recall that those estimates are for carbon taxes worth less than half that proposed by the Gillibrand campaign and you get an idea about the damage they would do to the U.S. But wouldn’t the cost be justified if a carbon tax could avert an impending climate crisis?

Not quite. The left-wing Carbon Tax Center, which has pushed such schemes since 2007, offers some analysis on a carbon tax that’s strikingly similar to the Gillibrand proposal. The group happily notes that a carbon tax “is going to generate large amounts of revenue” to the government. But according to the Center, a $50 per metric ton carbon tax—just $2 shy of Gillibrand’s proposal—is only “the threshold of robustness” needed to slow any increase in global temperatures.

In other words, the Gillibrand carbon tax would be effective at taxing Americans, but it wouldn’t begin to affect the climate. Applied to any other issue, most people would call that a raw deal.

And it’s an expensive one. Because non-renewables (and nuclear power) provide some 81 percent of America’s energy output, a tax on carbon-based fuels would inflict hundreds of billions of dollars in taxes each year on households, raising the price of virtually everything Americans consume—food, clothing, transportation, and heating and air conditioning included.

But even taking Sen. Gillibrand’s climate change plan at face value, it isn’t clear where the $10 trillion needed for her proposed “moonshot” would come from. Her campaign’s carbon tax revenue estimates at $200 billion annually over a decade only account for $2 trillion of the proposed $3 trillion in federal “green” spending. How the other $7 trillion—presumably provided by private industry—will be spent is unclear.

What is clear is that the gaping wound any carbon tax would inflict on the economy won’t be soothed by so-called “green jobs,” the fantasy cure-all often proposed by eco-activists. Take it from Gordon Hughes, a former World Bank energy adviser and global warming advocate, in his 2011 report The Myth of Green Jobs:

. . . there are no sound economic arguments to support an assertion that green energy policies will increase the total level of employment in the medium or longer term when we hold macroeconomic conditions constant. Yes, more people may be employed in manufacturing wind turbines and constructing wind farms, but this neglects the diversion of investment from the rest of the economy.

No matter how you slice it, a carbon tax is a thunderstorm on an economic parade. Like so many ideas from the environmental Left, this one should be left in the rain.