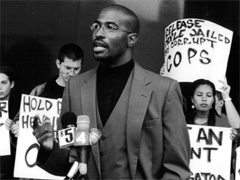 It turns out that Jones was Huffington’s grassroots political director when she ran for governor in the 2003 recall election. In fact, Jones, a self-described “communist,” thought Huffington was so wonderful he was part of the effort to draft her to run for office.

A Miami Herald article from Aug. 3, 2003, described Jones as a “Bay Area activist” and “director of the Ella Baker Center for Human Rights” who was “[l]eading the charge” to persuade Huffington to run.

“Jones and the fledgling campaign have unveiled a Web site – www.RunAriannaRun.com – to generate enthusiasm,” the article said. Jones sent out an email the previous month to activists soliciting support for a Huffington candidacy.

“She’s anti-drug war, tough on corporate crime, anti-war, anti-Bush, pro-environment, pro-electoral reform – and smart as hell,” Jones was quoted as writing in the email. “If anybody could pull this off, it would be Arianna.”

One would think the Huffington Post would disclose how tight Jones and Huffington are, yet the website doesn’t bother to do so in its articles.

Whatever happened to ethics in journalism? Oh wait, I forgot: the Huffington Post isn’t journalism.