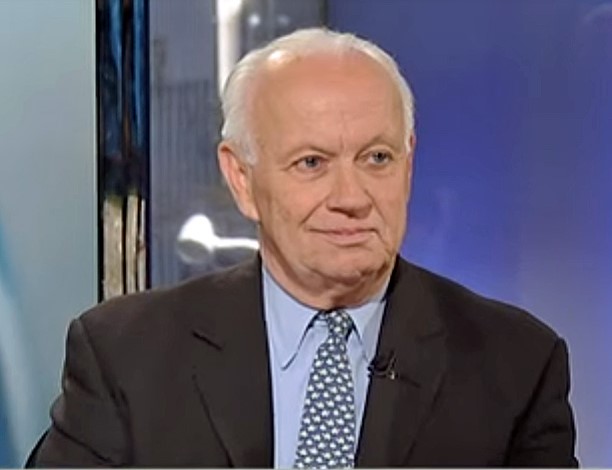 “My promise to Paul [was]…‘if you [die] before me and you come back ten years later, [and] you walk in the room [at the foundation], you won’t know the people most likely and you may not even know what they are talking about—but it will feel right.’” —Robert Forrester Credit: Fox Business/YouTube screenshot. License: https://goo.gl/unLrTW.
by Neil Maghami

Summary: Newman’s Own Foundation, founded by legendary actor Paul Newman, is funded by profits from his highly successful Newman’s Own line of food products. But the decisions of the current leadership—including ending a licensing agreement with Nell Newman’s organic product division—have left his heirs frustrated. Surviving family members are worried that the philanthropy he created to fund good works has deviated from the charitable mission he intended before his death in 2008.

Meanwhile, Robert Forrester bided his time. He waited until May 2016 to further comment publicly on issues raised in the Vanity Fair piece, which he did on stage at the Washington Center for the Performing Arts in Olympia, Washington. While never mentioning the Seal article directly, Forrester used the question–and-answer session with Norma Schuiteman of the Community Foundation of South Puget South to push back further on Seal’s various allegations. The session, recorded and posted to YouTube, allowed Forrester to make a few important points in defense of the Newman’s Own Foundation that had not been incorporated into Seal’s article. He also played portions of a few videos created by the foundation that document its story, in which Paul Newman himself speaks at length about his views on philanthropy.

Newman started his foundation, Forrester said, to put his own personal stamp on the philanthropic activities funded by his food product line. Forrester recalls saying to Newman: “Paul, what you really need to do is think about starting this [foundation] in your lifetime, so you can see how it’s operating, you can see the people, you can get rid of the people if you wish.… I’ve seen too many cases where people don’t do it in their lifetime, [and] their estates end up somewhere else, and they would be disappointed [by this outcome].”

He explains further: “My promise to Paul [was]…‘if you [die] before me and you come back ten years later, [and] you walk in the room [at the foundation], you won’t know the people most likely and you may not even know what they are talking about—but it will feel right.’”

Forrester then shared how, for him, two promises to Paul Newman were implicit in this prediction. First, Forrester and his team would focus on ensuring Newman’s Own continues as a strongly competitive business. “You can’t come back ten years from now if we haven’t succeeded as a business,” he explained. The second promise involves Forrester’s understanding of the special quality of leadership needed for his work at Newman’s Own, a leadership that will pass on Newman’s values. CEO title aside, when it comes to Newman’s philanthropic legacy and intent, Forrester refers to himself as a “steward, trying to connect [the foundation’s] past, through the present, to the future—as we go through change.”

“We…work [Newman’s philosophy and values] into the system going forward with the younger people that we’ve hired, and it’s working well so far,” Forrester said.

“Some days, I really am upset with him—he never left a book that says ‘this is what you should do’ or ‘this is how I want decisions to be made,’” Forrester deadpanned, with a smile.

“[Newman] never left a book that says ‘this is what you should do’ or ‘this is how I want decisions to be made,’”—Robert Forrester

Responding to a question from the audience about the involvement of Newman’s family with the foundation, Forrester said: “Paul always thought of Newman’s Own as being for the public trust. It wasn’t about him, it wasn’t about the Newman family. We have one of Paul’s daughters who serves on the board on a year-to-year appointment…and I wanted to make sure that we continue a connection [with the family].” While acknowledging that he could not speak about certain details of the situation, he confirmed the funding that will flow from Paul Newman’s personal estate into foundations for each of the daughters.

“We’re really reaching out to Paul’s two grandchildren, Peter and Henry…not to come to work at the foundation, but to get out and work with the nonprofits [the foundation supports],” Forrester added. “It always bothers me if someone comes into a grant-making place and they haven’t been in the trenches.”

In a comment provided specifically for this article, a Newman’s Own spokesperson shared the following additional context about Forrester’s 2016 talk:

The recording of Mr. Forrester’s speaking event [in Olympia] is representative of how we convey the history and values of our organization internally, to both new and existing employees. The videos he shows are edited from longer versions we show our employees as part of the on-boarding process. Providing a sense of our history and values is an important part of that process. Mr. Forrester and our senior staff conduct regular all-staff meetings where we discuss these values. Internal newsletters and email communications also serve to reinforce the message.

In November 2016, the New York Times published an article citing Paul Newman’s influence as a philanthropic grandfather to four well-known actors—Hugh Jackman, Edward Norton, Kevin Bacon, and Ryan Devlin—all of whom, inspired by Newman’s Own’s success, are experimenting with various initiatives aimed at helping charitable groups. The article made no mention of the Vanity Fair piece.

But in a January 2017 interview with Clea Newman, a reporter from the London-based Daily Mail directly referenced public perceptions about a rift in the Newman family’s relationship to Paul Newman’s charitable work. Here is Clea’s comment in response:

My father was the face of the company and when he passed away someone had to take over. It is inevitably going to be slightly different to when he was alive. The most important thing is that Newman’s Own is still doing what it is meant to do: giving all proceeds to charity…I hope [my father] would be proud of what we are doing. He asked me to look after his philanthropic legacy, but it takes a village…

This has not been the final word. In March 2017, the Vanity Fair allegations were aired again, restated by CNBC in an article about Newman’s Own. In addition to rehashing Kendall Newman’s claims, author Tom Cuneff incorporated the following comment from Nell Newman regarding the foundation:

I don’t think this is what my father would have wanted. He was a man of simple tastes, and he was a loyal to a fault. My dad did tell us we were all going to rotate on and off the board. I haven’t been asked to join the board, but it’s water under the bridge, unfortunately. I am disappointed. But such is the way of the world in big business. Time to move on.

And once again, Clea Newman is quoted as speaking up for the foundation: “My dad would just be honored that people are continuing to trust the products and buy them so we can support wonderful organizations. He came up with a model nobody ever thought of before, and that was so typical of him. We’re at almost half a billion dollars in charitable giving from a lark. It was like a joke in the beginning.”

“It was for the public good,” Robert Forrester added, also quoted in the CNBC article. “He [Paul Newman] organized his private estate so that ultimately 90 percent of that or more ends up in charity that each daughter will [control]. Susan never came and talked to me about anything. Families are complicated. I can’t comment further than that. My job is to protect Paul.”

The final installment of “Wrong Dressing, Right Salad” shows that family members are often not the best judges of donor intent — and how givers can protect their legacy in the future.