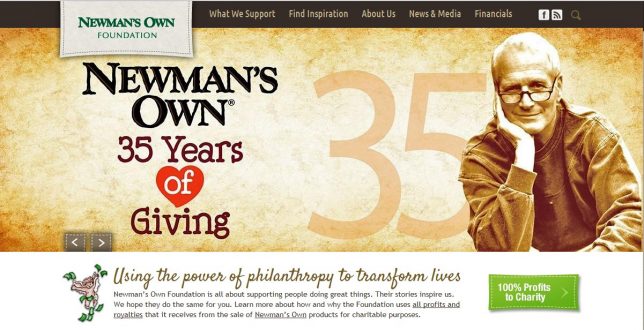 A 2013 profile of Newman’s Own in Samaritan Mag painted a harmonious picture of the charity’s diverse philanthropic activities and the Newman family’s role in them. Credit: Newman's Own website/Screenshot. License: https://goo.gl/VTQfSr.
by Neil Maghami

Summary: Newman’s Own Foundation, founded by legendary actor Paul Newman, is funded by profits from his highly successful Newman’s Own line of food products. But the decisions of the current leadership—including ending a licensing agreement with Nell Newman’s organic product division—have left his heirs frustrated. Surviving family members are worried that the philanthropy he created to fund good works has deviated from the charitable mission he intended before his death in 2008.

As Mark Seal reported, Paul Newman’s daughters’ respective foundations will be funded after the passing of Joanne Woodward, who is now 87. Nell Newman actually established her foundation back in 2010, with the goal of carrying out her father’s legacy of charitable giving, coupled with her passion for the environment. In her own words:

As the daughter of Paul Newman I was in essence, raised to be a philanthropist. The Nell Newman Foundation seeks to follow the original mission of my father’s philanthropy. To support the small, visionary, and perhaps untested organizations. To fund the underdogs, and unpopular ideas my father and mother originally championed. To relieve human suffering and sustain a resilient economy which will benefit humanity and the ecosystem into the future. These goals necessitate the fostering of experiential learning for our youth, the protection of and restoration of our bioregions.

“Since 2015, [funding the foundation] has become more difficult,” Nell says. But she plans to continue her work in the organic food movement, particularly focusing on a sustainable food revolution.

Mark Seal’s controversial Vanity Fair article takes a convoluted set of facts and allegations and hammers it into a coherent story. To clarify the situation, Seal could have invoked two important words that do not appear in his article, but which are well-known to Foundation Watch readers: “donor intent.”

Mark Seal could have invoked two important words that do not appear in his July 2015 Vanity Fair article: “donor intent.”

Newman isn’t the first philanthropist to have faced the matter of planning for how a large charitable foundation will function after the founder dies. The writings of CRC senior fellow Martin Morse Wooster could have provided Seal with a deep background to draw on—starting with Wooster’s own authoritative The Great Philanthropists & the Problem of “Donor Intent.” (The fourth edition of this CRC publication, How Great Philanthropists Failed & How You Can Succeed at Protecting Your Legacy is excerpted in the upcoming issue of Capital Research and will be available in print late this fall.)

Had he read Wooster’s work, Seal could have compared the Newman’s Own situation with, for example, the arrangements that fast-food executive Dave Thomas made for his Dave Thomas Foundation for Adoption. Other examples from Wooster could include the careful steps heiress Margaret Cargill completed before her death to guide the giving of her multi-billion-dollar Margaret A. Cargill Philanthropies (profiled in Foundation Watch, August 2015).

Given the dramatically different views from the foundation’s professional staff and some of the family members, whether Paul Newman’s donor intent is being respected is a matter still open to speculation. Absent any new information, one way to assess a shift would be to review the foundation’s granting patterns both before and after Newman’s demise. Has there been a great change in giving in the post-Newman era? Are the size of contributions, and the types of groups receiving funding still recognizable from one era to the next? Has the foundation moved from a focus on operationally-oriented grants to small charitable organizations (its long-standing pattern) to making grants to policy-oriented groups located in Washington, D.C.? Based on a review of available IRS disclosures, no such massive shift in giving has occurred. So, absent any new documents that clearly provide guidance, the assertions of the foundation’s leadership and the claims of some Newman heirs remain in conflict.

With luck, in the years ahead, the fraught relationship between the Newman’s Own Foundation and members of the Newman family can be healed. But one thing is certain: The Newman’s Own controversy has shined a spotlight on the often overlooked concept of donor intent—and in so doing has caught the attention of other philanthropists who may be considering donating their personal fortunes to foundations that will outlive them.