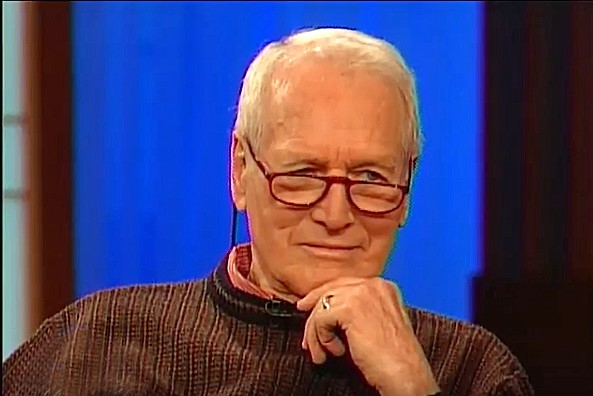 Paul Newman (1925-2008) lived an extraordinarily productive life. He succeeded not only in front of the camera as a leading man in many memorable films, but behind it as a director and producer. Credit: Newman’s Own Foundation/YouTube screenshot. License: https://goo.gl/tj9pqA.
by Neil Maghami

Summary: Newman’s Own Foundation, founded by legendary actor Paul Newman, is funded by profits from his highly successful Newman’s Own line of food products. Surviving family members are worried that the philanthropy he created to fund good works has deviated from the charitable mission he intended before his death in 2008.

This story has got all the ingredients of a first-class Hollywood soap opera: A famous movie star passes away, leaving behind a personal fortune and a foundation designed to support numerous charitable causes. Over time, a rift deepens between the star’s eldest daughter by his first wife and the foundation’s hard-working staff. The daughter gives an interview to a widely read glossy magazine and goes public with her concerns about whether the star’s vision as founder and chief donor is being respected. The foundation staff finds clever ways to respond to this attack. Public and media interest in the dispute grows to a fever pitch…but the writers are on strike, so to speak, and the ending has yet to be written.

The above paragraph does not describe a feature film or a soap opera mini-series streaming on Hulu, but actual events concerning the Newman’s Own Foundation, created by actor Paul Newman not long before his death in 2008. Susan Kendall Newman, the star’s eldest daughter, really did air her consternation about how the foundation was being run in a 2015 Vanity Fair article. And the foundation has, since then, pushed back on her comments—and on further criticisms leveled by other members of the Newman family.

In this edition of Foundation Watch, we will outline the dispute over Paul Newman’s “donor intent”—one of philanthropy’s most important concepts. At stake is Newman’s legacy as a philanthropist, the basic nature of the foundation that bears his name, and a significant amount of philanthropic dollars: In its 2015 IRS filings, the Newman Foundation reported assets of approximately $218 million, with $27 million paid out in grants.

The story of Paul Newman’s foundation, Newman’s Own, has all the ingredients of a first-class Hollywood soap opera

Paul Newman (1925-2008) lived an extraordinarily productive life. He succeeded not only in front of the camera as a leading man in many memorable films, but behind it as a director and producer. Newman was also an avid sportsman, and like his contemporaries Steve McQueen and James Dean participated in auto racing. His exploits as a race-car driver and team manager inspired the documentary Winning: The Racing Life of Paul Newman, released in 2015. But, in his private life, unlike many other Hollywood celebrities, he proved a devoted parent and spouse and loved to cook.

Newman’s “foodie” obsessions eventually led to a line of specialty food products, launched with the sale of his now-famous salad dressing, marketed under the trademark “Newman’s Own.” The brand continues to enjoy widespread popularity. Indeed, in his later years, Newman was both humbled and amused by the knowledge that his spaghetti sauce earned more royalties than his movies: The after-tax profits generated from Newman’s Own were such that the star of  Butch Cassidy and the Sundance Kid, The Hustler and The Verdict, among many others, was able to embark on a new noteworthy career as a big-dollar philanthropist.

In Pursuit of the Common Good: Twenty Five Years of Improving the World, One Bottle of Salad Dressing at a Time, a funny memoir co-written by Newman and his friend, the screenwriter and biographer A.E. Hotchner, describes the mammoth food enterprise as “a joke” that started with a few personal recipes in 1982. But by 2003, the joke that became Newman’s Own had generated “over $250 million” in cumulative charitable contributions. (The fascinating Hotchner, now 97—once a close friend and biographer of Ernest Hemingway—was integral to the founding of the brand. He has written a separate memoir, Paul and Me, about Newman and the experience.)

Today, thirty-five years after their first shipment of salad dressing, the cumulative figure of charitable contributions from Newman’s Own has reached an amazing $495 million. By way of comparison, imagine a world in which the producers of the 2017 action movie blockbuster The Fate of The Furious, which grossed about $500 million in its opening weekend, donated that entire sum to charity. It simply wouldn’t happen.

Unlike many Hollywood liberals, Paul Newman had a keen sense of humor and a firm grasp of irony. In his book about the founding of Newman’s Own, the actor/director/producer/race-car driver/cook/entrepreneur muses about the contradiction between his personal dislike of “noisy philanthropy”—which is to say his preference that “philanthropy ought to be anonymous”—and the fact that his personal celebrity helped underwrite his charity: By putting his face on bottles and food packages, and announcing that all after-tax proceeds would go to charity, he created the means needed to support many good causes.

The Newman’s Own product line keeps growing in variety and markets served, guided by Newman’s cardinal rule that “quality trumps profits.” This is a reassuring message for those food-conscious consumers who appreciate Newman’s Own for its commitment to high-quality ingredients. In line with its founder’s vision, all profits continue to be donated to charity—including the Newman-founded global network of adventure camps for seriously-ill children, The SeriousFun Children’s Network. Based in Westport, Connecticut, SeriousFun reported net assets of $8.4 million and total revenues of $12.3 million in its 2015 disclosures. Clea Newman, one of Paul Newman’s daughters, works as a senior director at the Network.

But Newman’s Own was not the first time Paul Newman had founded a personal foundation; he was already an experienced philanthropist. In the 1970s, he created a vehicle called the “No Sutch Foundation,” (the spelling of “sutch” a play on the name of the character he played in Butch Cassidy and the Sundance Kid.) This foundation was political in nature, however. Through it, Newman provided funding for groups involved in civil rights campaigns.

In 2005, to formalize Newman’s Own growing support for charitable causes, Paul Newman created the Newman’s Own Foundation, and made a contribution of $78.6 million to get it started, followed by $40.3 million the following year. Upon Newman’s death in 2008, Robert Forrester became president and CEO of the foundation. Forrester had originally worked with Newman in 1993 on the children’s camps initiative; he later became active with Newman’s Own food line, serving from its inception as vice-chairman of the board.

A 2013 profile of Newman’s Own in Samaritan Mag painted a harmonious picture of the charity’s diverse philanthropic activities and the Newman family’s role in them. Actress Joanne Woodward, Newman’s widow, and his daughter Clea, sit on the foundation’s board. Clea spoke enthusiastically about its grants program, saying “sometimes I am overwhelmed by the breadth of work we do.”

But behind this placid façade, as in any good Hollywood soap opera, all was not well. Cue sinister music: A distinctly darker picture of the relationship between some members of the Newman family and the foundation was to emerge within two years of the founder’s death.

In the next installment of “Wrong Dressing, Right Salad” we explore how the dispute over preserving Paul Newman’s original intent for his fortune erupted into a complete rift within the Newman family.