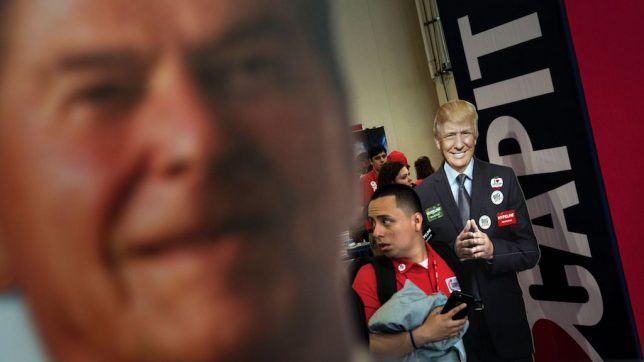 This piece was originally published by American Greatness on April 2, 2018.

In the 2016 campaign, the slogan “Make America Great Again” was simultaneously a cry from the heart and a masterpiece of political marketing.

Ronald Reagan used a version, “Let’s make America great again,” in 1980. Then the country faced double-digit inflation and interest rates, gasoline rationing, and a Soviet Empire on the march around the world. In what became known as the “Malaise Speech,” Carter blamed our problems on “a fundamental threat to American democracy” which was, he said, “a crisis of confidence” among the American people. Reagan said: Get rid of leaders like Carter, and America will return to confidence and greatness.

Sometimes, slogans tell us a lot about the candidates and campaigns with whom they are associated. Why is the candidate running? On what goal is he or she focused? What values does he or she consider most important? James K. Polk demanded the annexation of the Pacific Northwest to 54 degrees 40 minutes north latitude; he ran on “Fifty-four Forty or Fight!” In the aftermath of the Civil War, Ulysses S. Grant depicted Democrats as Southern sympathizers and urged Union veterans to “Vote As You Shot!”

In politics, an effective slogan brands a candidate; it creates a logical and emotional connection between the candidate and voters, ensuring supporters’ loyalty and building their enthusiasm.

Unfortunately for Hillary Clinton in 2016, her Republican opponent was one of the greatest practitioners of branding. His name was associated with uncompromising quality and with business success, and it appeared on suits and ties, golf resorts and hotels, books and TV shows, even board games. In people’s minds, Donald Trump was linked to tough-minded meritocracy (doing a good job or “You’re fired!”) and with turning failure into triumph.

In 1990, there was a deep recession. People weren’t going to Trump’s Taj Mahal casino in Atlantic City. The Plaza Hotel and the Trump Shuttle were in bad shape financially. Trump and his companies reportedly owed $3 billion. One author described a somber scene: “Bankers held gigantic meetings at Trump Tower with, like, 40 banks all sitting around in a room, Donald very sober . . .” The bankers’ problem was that Trump’s assets were worth more with his name on them than in foreclosure, so they were stuck with him. He got enough time to rebuild his fortune, and to write a sequel to his book The Art of the Deal. The new book was The Art of the Comeback.

When Trump’s critics tell the story, they portray him as a con-man cheating the banks. In reality, he outfoxed them, to their benefit as well as to his own, by uniting his interests and theirs. Lots of wealthy people went broke back then, but Trump survived because he understood the value of branding.

Donald Trump started using the slogan “Make America Great Again” on November 7, 2012, the day after Mitt Romney lost to President Obama. Five days later, Trump registered it with the U.S. Patent and Trademark Office, seeking exclusive rights for political uses. The phrase received service-mark status in July 2015 when he began using it in the campaign.

Thus, Trump had a simple, four-word slogan, one that tied him to the most popular Republican president of recent decades—one that conveyed a clear message, that resonated with lots of people, and that could fit on hats. It was so recognizable that people just started calling it MAGA.

Every aspect of his campaign message could be played as variations on the theme. At the Republican National Convention, each day had a theme like “Make America Safe Again” or “Make America Work Again.”

The Hillary Clinton campaign also put a lot of thought into a slogan—into 84 of them, in fact. That’s how many they considered. (There were actually 85 slogans on the list, with one appearing twice.)

And my favorite: “Next begins with you.” (Say what?)

When I saw the list, I thought immediately of Ted Kennedy’s 1979 interview with Roger Mudd of CBS News, in which the U.S. Senator from Massachusetts  was unable to answer the question: “Why do you want to be president?”

In 2016, Hillary Clinton ran against the guy who wrote the book on branding, who picked his campaign slogan four years before the election so that everything the campaign did could be tied to the slogan—and the best her campaign could do was throw words together seemingly at random.

To illustrate this, I created a couple of word clouds—one for Hillary’s message: 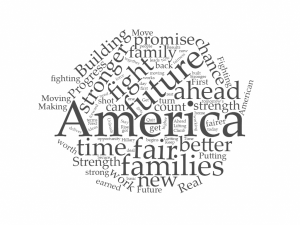 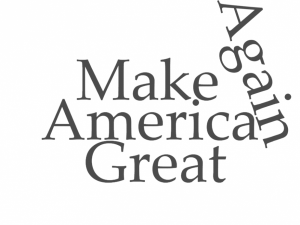 Donald Trump knew what he wanted to do as president, and he could express it in a clear and concise way. Hillary Clinton was befuddled.

In a presidential campaign, twice as much money is not enough of an advantage if you don’t know what your message is.