Who Is Russell Hirshon?

On my walk to work from the Dupont Circle metro station this morning, I saw this sign: 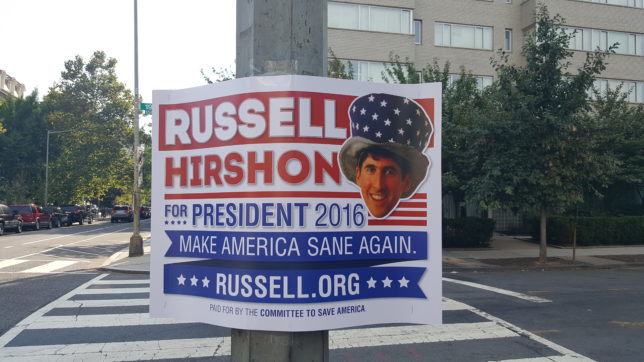 All I could think was, “Who is this guy, and why is he getting into the race so late?”

So I got to work and looked up Russell.org. As it turns out, Mr. Hirshon doesn’t want my vote or anyone else’s. From the website:

“I don’t want your vote and I certainly don’t want your money.” Russell Hirshon believes that spending on this Presidential election may be out of control. With estimates that approximately $2.6 billion was spent in the last presidential election, it’s time to redirect campaign contributions. As donors, What [sic] would happen if we gave 10% of intended campaign contributions to a charitable cause instead? Likely some very beautiful things.

Russell’s campaign is focused on inspiring charitable giving rather than political contributions. Please help me make this a reality. Donate to one of your own favorite organizations or start now by donating to one of our favorite causes. Get a campaign t-shirt and the proceeds go to charity.

Feel free to vote for the other candidates but be sure that you commit time to a cause or support to an organization. Real change in America begins with you.

Huh. I don’t want to make any judgments on how much campaign spending is too much (it’s not my expertise), but I have to agree with Hirshon—real change in America begins with all of us.

If we want our neighborhoods to be nicer places to live—if we want to be part of real communities—we have to make the effort ourselves. It can be as simple as picking up trash on the sidewalk while heading to work or as involved as volunteering serious time with a local charity.

A recent survey released by the American Enterprise Institute and the Los Angeles Times has some enlightening responses to the question, “Which of the following do you think have the greatest responsibility for helping the poor: charities, churches, families and relatives, the government, the poor themselves, or some other group or organization?” (The options were listed in a randomized order each time.) Thirty-five percent of the respondents stated the government has the greatest responsibility for helping the poor. Fifty-six percent of respondents answered that either the poor themselves (18 percent), family (15 percent), church (13 percent), or charity (10 percent) have the greatest responsibility to help the poor.

These four categories—charity, church, family, and the poor themselves—are all things that we, as individuals, control. If we want to turn our neighborhoods (and ultimately the U.S. as a whole) into communities where people live and thrive, we need to remember that we have the power to do so. The government is not going to do it for us.

Of the survey respondents who are living in poverty, only 31 percent think that the government has the greatest responsibility for helping the poor. Thirty-five percent of the respondents in poverty think that it’s the responsibility of churches (24 percent) and charities (11 percent) to help the poor. The survey also included the question, “Would you say that government efforts to fight poverty have had a big impact on reducing poverty… some impact… no impact… or would you say that government efforts have made things worse for the poor?”

Of the respondents in poverty, 52 percent said that government efforts to fight poverty have either made things worse (40 percent) or had no impact (12 percent). If those who are in poverty don’t believe it’s the government’s job to be providing assistance, and they believe that the assistance the government is providing is either doing nothing or making the situation worse, we need a different approach to fighting poverty.

If we want to reduce poverty in our own neighborhoods and create communities in which people thrive, it’s time to start donating our time, money, and resources to groups that can actually make a difference: local charities and religious organizations. Russell Hirshon may not be a legitimate presidential candidate, but he has some good ideas about the positive impact that charity can have on our country.