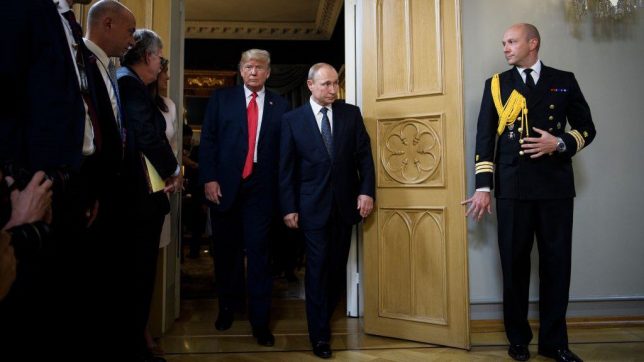 This article originally appeared in American Greatness on October 11, 2018.

It’s been almost 21 months since the Obama Administration issued an “Intelligence Community Assessment” containing the explosive claim that the Russian government deliberately helped elect Donald Trump president. It’s a claim for which, so far, no serious evidence has been made public.

Russians are said to have “meddled” in the 2016 election for one or more reasons: to discredit American democracy, or to hurt Hillary Clinton personally (Putin supposedly holds a grudge against her), or to damage the next president (presumed to be Clinton), or to help Trump. What evidence is there for that last motive, that the Russians were specifically trying to help Trump?

If Trump were a leftist or a Democrat, this would not be considered important. The indictments last February of Russian “trolls” alleged that the Russians promoted the campaigns of Bernie Sanders and Green Party candidate Jill Stein. Hardly anyone noticed. The Russians in the past supported various candidates for president, including Henry Wallace, Adlai Stevenson, John F. Kennedy, Hubert Humphrey, and perhaps Barack Obama, with no damage to the reputations of those men.

But the charge that Trump was Putin’s man in the election has done great harm to the Trump administration and to the country. If Putin and his minions intended to discredit democracy, they succeeded: tens of millions of Americans think the last election was stolen.

Thus, it mattered that, at the end of 2016, people in the intelligence community began promoting the Putin-helped-Trump idea.

The New York Times, on December 9, 2016, reported that “American intelligence agencies have concluded with ‘high confidence’ that Russia acted covertly in the latter stages of the presidential campaign to harm Hillary Clinton’s chances and promote Donald J. Trump, according to senior administration officials.”

That was directly contradicted by the January 7, 2017 Intelligence Community Assessment that, once it became clear Clinton was likely to win, the Russians in the latter stages moved away from helping “Trump’s chances of victory” and instead “focused more on undercutting Secretary Clinton’s legitimacy and crippling her presidency from its start, including by impugning the fairness of the election.”

After a December 10 inquiry from the news media regarding the FBI’s position on the issue, the FBI’s Peter Strzok wrote in an email that “we did not have information to differentiate what their ultimate goal was,” and “we can’t say the sole and primary purpose was specifically intended to help someone, hurt someone else or undermine the process. The reality is all three.”

Another Times report, on December 11, claimed the CIA’s Russia-backed-Trump position was based on “an analysis of what many believe is overwhelming circumstantial evidence—evidence that others feel does not support firm judgments—that the Russians put a thumb on the scale for Mr. Trump, and got their desired outcome.”

The unclassified version of the Intelligence Community Assessment report came out on January 7, less than two weeks before Trump took office.

The report was backed by the FBI, the CIA, and the National Security Agency, although the NSA supported the Russia-backed-Trump part with only “moderate confidence” (skepticism). The analysts who wrote the report were “hand picked,” according to then-Director of National Intelligence James Clapper. Strangely, the Department of Homeland Security, the Defense Intelligence Agency, and the State Department’s Bureau of Intelligence and Research (INR) were not included.

Like a term paper written the night before it’s due, the ICA was a rush job, with fantastical leaps of logic and lots of padding.

Presented as circumstantial evidence against Trump:

Padding: The substantive part of the report was all of five pages long. The report’s largest section, “Annex A,” was seven pages long, dealing with the Russian news/propaganda operations RT (Russia Today) and Sputnik. “Annex A” has literally nothing to do with Trump or the 2016 campaign. Indeed, it was written in 2012, and focuses largely on Russia’s strong support for the Far Left, specifically the Occupy Wall Street movement.

What was the real purpose of the ICA?

On July 19, James Clapper said on CNN that, “if it weren’t for President Obama, we might not have done the Intelligence Community Assessment that we did, that set off a whole sequence of events which are still unfolding today—notably, Special Counsel Mueller’s investigation. President Obama is responsible for that, and it was he who tasked us to do that Intelligence Community Assessment in the first place.”

The report hobbled the new president.