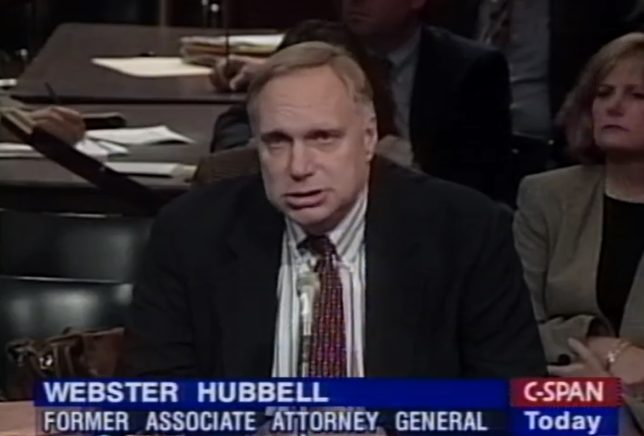 On this day 23 years ago, February 13, 1997, former Associate Attorney General Webster Hubbell—once the third-highest ranking official at President Bill Clinton’s U.S. Justice Department—walked out of prison after enduring his own go-round with the business end of justice. In December 1994 he had pleaded guilty to looting several hundred thousand dollars from his former law partners. A longtime close personal associate of President Clinton, Hubbell had also been a former law partner of First Lady Hillary Clinton before he moved with them from Arkansas to Washington, D.C., following Clinton’s election as president.

A comprehensive new profile of former President Clinton posted at InfluenceWatch.org explains the legal ordeals of this former top federal lawman and other events from the turbulent Clinton administration.

Kenneth Starr, an independent counsel appointed to investigate several suspicious business dealings involving the president and Ms. Clinton had reason to believe Hubbell was well positioned to provide testimony that would assist with the investigation. But Starr ultimately concluded Hubbell was not giving full and truthful testimony to investigators.

The InfluenceWatch profile explains why Starr had reason to be suspicious:

The preceding March 1994 according to the Wall Street Journal, top White House aides—including Thomas McLarty, a childhood friend of Bill Clinton—began discussing how to “arrange financial aid” for Hubbell. On March 14, nine months before he would plead guilty to stealing from the Rose firm, Hubbell resigned his position as Associate Attorney General. By June the Lippo Group, an Indonesian firm with ties to Arkansas, had paid Hubbell $100,000 for what the Journal stated was “undisclosed services.”

A similar report from the Associated Press noted that by April 1994, shortly after Hubbell resigned from the U.S. Department of Justice, Clinton confidant Vernon Jordan had arranged a $60,000 payment to Hubbell from the firm of Ronald Perelman, a billionaire investor in Revlon. The Associated Press tabulated the total payments to Hubbell for the two years after his resignation at more than $500,000 ($844,000 in 2019 dollars) from 14 different sources.

In his memoir, Starr speculated that Hubbell had been provided “hush money” in exchange for keeping silent.