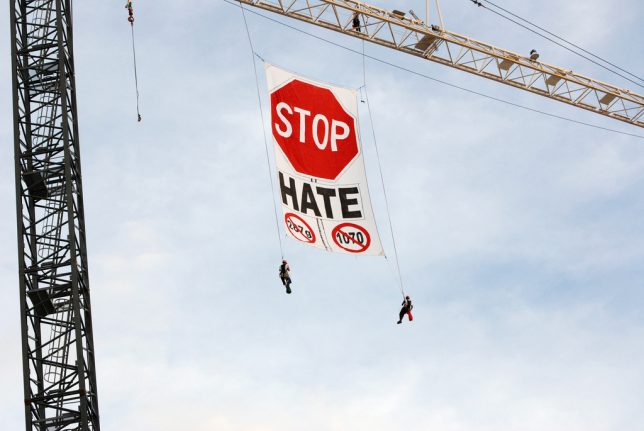 The groups seeking to promote the “hate crime is on the rise and it is Trump’s fault” narrative are gaining ground. One of the main funders of the movement is the Open Society Foundations, whose “Communities Against Hate” project is described as “an initiative of 11 prominent national organizations working together to address the disturbing spike in hate incidents across the United States.” The Communities Against Hate initiative funds 48 local organizations which are collecting data and working with “marginalized groups” to promote this narrative. Notably, the Southern Poverty Law Center (SPLC) is a “strategic advisor” of this initiative.

For the first time to aggregate data on hate incidents, organizations representing a diverse set of impacted communities—including the Black, Latinx, LGBTQ, Muslim, Arab communities, as well as women—have come together as Communities Against Hate. This initiative will pull together traditionally disparate reporting of hate incidents and provide support for victims and communities. The pairing of services and documentation is unprecedented and especially critical in the current social climate.

The “particularly unsavory left-wing pressure group” Color of Change is one of the Communities Against Hate’s so-called “partner organizations.” Color of Change was founded by former MoveOn.org executive James Rucker, and Secretary of State Project co-founder Van Jones, the former “Green Jobs Czar” who was fired from the Obama White House after being exposed as a 9/11 truther and founder of the radical group “STORM,” a “Marxist-Leninist group whose hero was Chinese Communist dictator Mao Tse Tung.”

Arisha Michelle Hatch, managing director of Color of Change, was quoted in the Communities Against Hate’s press release, claiming that “hate incidents” are “normalized by Trump’s administration:”

Anti-black hate incidents and crimes continue to play a daily role in the lives of black people in ways that threaten our safety and security. These hate incidents, often unreported or ignored by law enforcement agencies and major media—and now normalized by Trump’s administration—can surface in many forms: a racial slur spray painted on a community center wall; persistent, unchecked online harassment from an anonymous white nationalist troll; or during a violent, xenophobic encounter on a subway. Color of Change is proud to be a member of the Communities Against Hate initiative’s timely effort to push back against the normalization of this kind of deep-seated bigotry.

Some of the grant recipients include the New York and Dallas Fort Worth branches of the Council on American-Islamic Relations (CAIR), both of which are launching hate crime reporting initiatives geared toward Muslim-Americans; and the Transgender Law Center, a national organization and partner of Communities Against Hate that aims to assist “transgender and gender nonconforming individuals” in reporting “hate violence.”

The SPLC is described as a “strategic advisor” to the initiative. SPLC President Richard Cohen was quoted as saying:

It’s critical that communities everywhere come together to respond to the increase in bigotry we’re seeing as those with hate in their hearts now seem to feel that they have a license to act on their worst instincts. . . . The launch of Communities Against Hate is an important step in that direction.

One can currently go into the Communities Against Hate website and sift through what they refer to as “stories.” At the time of this writing, 4,254 “hate incidents” were logged in the database. Users can search by state, type of bias, and type of incident. Some examples include an alleged incident in February, in Georgia:

During conversation with co-workers about Lunar New Year, a co-worker insisted that it’s Chinese New Year even when told that the holiday is celebrated by Vietnamese, Tibetan, Korean people, and more.

In Arkansas, in June:

A fight between four men occurred at a local tattoo parlor. Two of the men claim the fight broke out due to the tattoo parlor owner’s sexual orientation.

The biases one can review include “Anti-Black/African-American,” “Anti-Latino/Hispanic,” “Anti-South Asian,” “Anti-Asian,” “Anti-Arab/Middle Eastern,” “Anti-Native American,” “Anti-Lesbian, Gay, or Bisexual,” “Anti-Transgender, Gender-Nonconforming, Non-Binary, Gender Queer,” “Anti-Woman” and others, but importantly it leaves out “Anti-White/European.”

In the conclusion of Weaponizing Hate, learn how hate crime hoaxes add to the problem created by hate crime counters.