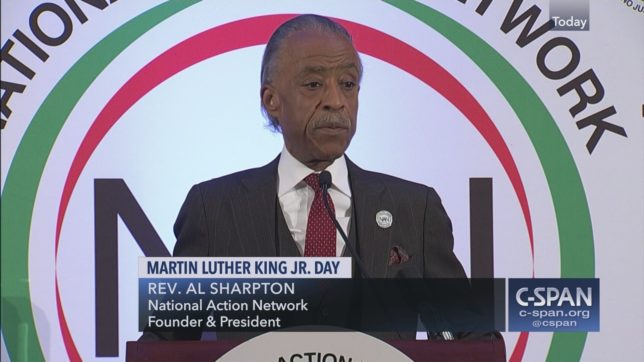 On June 1, declaring feelings of “regret and sadness” at “events unfolding across the country that are rooted in hate,” Verizon chairman and CEO Hans Vestberg pledged $10 million to be spread evenly among seven “social justice organizations” that purportedly advance Verizon’s commitment to “diversity and inclusion.”

One of the seven is the National Action Network (NAN), founded by the Rev. Al Sharpton, the controversial preacher and MSNBC commentator. Sharpton is still the president of NAN and (with his face adorning eight of the nine news features on its homepage) apparently remains the star attraction.

So, Verizon has pledged a $1.4 million payday for the man who, according to the late left-leaning journalist Christopher Hitchens, “proves that you can get away with anything in this country if the word reverend is in front of your name!”

As explained in the InfluenceWatch entry for Sharpton, this included a stint as a controversial informant for the FBI, which (Sharpton’s protestations of innocence to the contrary) did not appear to get going because he had donned a Batman cape and set out to fight crime:

In April 2014, muckraking website The Smoking Gun (TSG) posted the results of a lengthy investigation of Sharpton’s history as a confidential FBI informant regarding the New York underworld, which started in the early 1980s. The report was based on several hundred pages of documents released by the FBI in response to a Freedom of Information Act request, interviews with law enforcement officials, and TSG’s own interview with Sharpton. TSG’s conclusion was that “by any measure, Sharpton himself was a Mafia ‘associate,’ the law enforcement designation given to mob affiliates who, while not initiated, work with and for crime family members.”

Titled “The Left’s Street Boss,” a feature on Sharpton in Capital Research magazine begins with another look at this early era in his business career:

In 1980, according to a 1988 Washington Post report, the Rev. Al Sharpton presented himself as the majority stakeholder in a trash hauling company seeking a minority “set-aside” contract from the Con-Edison electrical utility. The venture failed when the real owner was revealed to be Matthew “Matty the Horse” Ianniello. Leaving aside that Mr. Ianniello did not fit the desired profile for a minority entrepreneur, the real problem was his rumored prominence in the Genovese crime family. Sharpton responded to the setback by saying he had never met Ianniello. Ianniello would later go to prison in 1988 and again in 2006 for racketeering offenses related to businesses silently under his control.

So, Mr. Hans Vestberg, CEO of Verizon, how’s that for a commitment to “diversity and inclusion”?

Sharpton’s legally suspect business affairs didn’t end there. The InfluenceWatch entry for Sharpton notes: “Over several decades, Sharpton and organizations associated with him (such as the National Action Network) have been embroiled in numerous legal entanglements with law enforcement and tax collection authorities.”

One example from the InfluenceWatch profile is a 1989 incident when the state of New York alleged “67 felonies relating to fraud and larceny,” complete with an allegation of stealing from a predecessor organization to NAN. (Sharpton eventually pleaded guilty to a misdemeanor.) In a second example, “Federal agents with subpoenas visited the homes of NAN staffers in 2007 to investigate several financial concerns that resulted in a $2 million assessment for unpaid payroll taxes.”

But the Capital Research profile of Sharpton also shows it’s reasonable to speculate that other concerns about “diversity and inclusion” motivate corporate America to make these choices:

But back in 1988, the Washington Post was still telling a different story. Rather than a “kingmaker,” Sharpton, along with his then-buddy, boxing promoter Don King, put the squeeze on the King of Pop—Michael Jackson—during the mega-star’s 1984 concert tour. The result was that Sharpton landed a $500,000 contract ($1.2 million in 2018 dollars) as the Jackson tour’s “community relations director,” after he and King had threatened a boycott of the tour if “black promoters” didn’t “have a piece of it.”

It wasn’t clear why anyone of any race who hadn’t directly contributed to Michael Jackson’s success deserved a piece of anything. What is easier to comprehend is why Sharpton critics at that time (and not for the last time) referred to one of his business arrangements as a “shakedown.”

It is reasonable to wonder whether Verizon is aware of these concerns and whether, knowing of them, Vestberg would choose to advance Verizon’s commitment to “diversity and inclusion” through a different organization. Or is something else going on here?