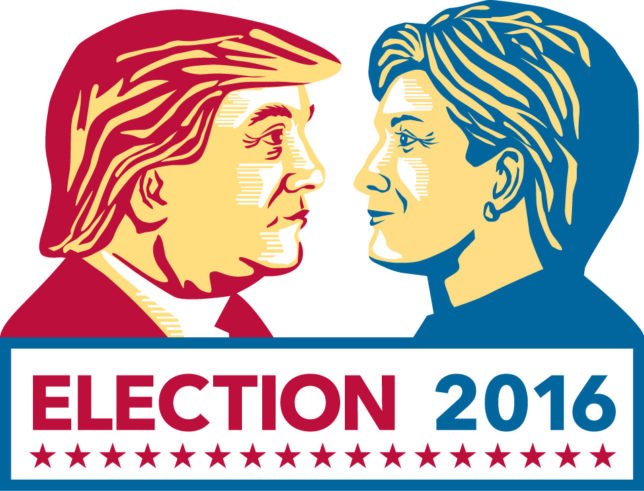 PHILADELPHIA, PENNSYLVANIA — The Democratic Party comes out of this convention deeply divided, with a nominee who, 56 percent of Americans believe, should have been indicted.

Tonight, Clinton was heckled repeatedly. Her supporters responded to the hecklers, outchanting them with “Hill-a-ree.” At times, some of us in the press area in the convention hall had difficulty hearing Clinton. Other major speakers were heckled this week, including Elizabeth Warren with chants of “We trusted you,” Leon Panetta and General John Allen with chants of “No more war,” and Bernie Sanders (at a pep rally outside the convention hall) with boos and jeers when he called on supporters to back the winning ticket.

This week, some of the protesters in Philadelphia took up the chant heard at last week’s Republican convention: “Lock her up!”

The anger of the Sanders people is entirely understandable, given that, as e-mails revealed this week, Democratic Party leaders cheated in order to deny their candidate the nomination, and discussed using religious bigotry to defeat him. Sanders, who got 46 percent of the delegates chosen in the primaries and caucuses, has reportedly decided to remain an independent rather than join the party.

Only a four-mile-long wall of eight-foot-high “no-scale” fence, keeping protesters far from delegates and most of the news media, created an illusion of peace in Philadelphia. (For some of the reality, see https://twitter.com/mikedogli/status/758578450760204288/video/1 .)  Armed guards enforced the rules, to make sure people went only where they were welcome. Photo ID was required, of course. Because, unlike security at the border or at the polls, security at a Democratic convention is something Democrats actually want.

Quoting the inaugural address of Franklin Roosevelt, Clinton in her pedestrian acceptance speech declared, “The only thing we have to fear is fear itself.” People in Orlando, Dallas, and Baton Rouge—not to mention Istanbul, Nice, and Munich—might differ with that sentiment, as might the law enforcement personnel who have kept convention-goers safe.

The tense convention came as polls show Donald Trump pulling even with, or ahead of, Hillary Clinton.

So panicked have the Democrats become that, Wednesday, they and their media allies stooped to bizarre accusations against the GOP candidate, Donald Trump, twisting his comments about Hillary’s 30,000+ missing e-mails into a basis for calling Trump “unpatriotic” and “treasonous.” It’s as if they had read stories about Senator Joe McCarthy and chose McCarthy, or a caricature of McCarthy, as a role model.

They have good reason to be worried.

Democrats are seeking a third consecutive presidential term for their party—something they last achieved in the 1940s, and something neither party has achieved since 1988. They are doing so at a time when the percentage of adults in the workforce is the worst it’s been since the 1970s, and when the U.S. is suffering its longest period of below-three-percent economic growth ever recorded. They are doing so in a time of worldwide chaos, with the world under siege by barbarians whose cruelty knows no bounds, and with the highest number of refugees since World War II.

Meanwhile, a chasm has opened between the party and the working-class Americans who used to be the party’s base.

Except for those subject to an appeal based on identity politics, the party’s attitude toward working class Americans is one of contempt. Wednesday, House Democratic Leader and former Speaker Nancy Pelosi said that “I think that, so many times, white—non-college-educated white males have voted Republican. They voted against their own economic interests because of guns, because of gays, and because of God, the three Gs, God being the woman’s right to choose,” she told Judy Woodruff on PBS.

A poll earlier this week found that, among “whites” with high-school diplomas but no college—both men and women—Clinton loses 62-23.

Meanwhile, the party has shown no interest in changing the policies—“gun control,” high taxes and regulation, unionization of teachers and other government employees, and corruption at all levels—that have laid waste to large portions of our nation’s cities, that turned America’s richest city, Detroit, into a depopulated wasteland. Instead, the party has devoted its energies to a War on Cops, unleashing the Obama Justice Department on police nationwide and honoring, at this national convention, a would-be cop killer and a would-be gay basher. (A brief tribute to police, on the last night of the convention, came far too late to change the tone of the convention.)

Clinton’s best card is that she is a woman in a country that has gone too long without electing a woman to the nation’s top office. But there’s a limit to the effectiveness of that appeal.

Former Secretary of State Madeleine Albright, introducing Hillary Clinton at an event the Saturday before this year’s New Hampshire primary, noted that “There’s a special place in hell for women who don’t help each other.” When the votes were counted, Bernie Sanders beat Clinton in New Hampshire by 11 points among women.

Supporters say Clinton is a strong advocate on women’s issues, and that’s true in a sense. She supports taxpayer-funded sex-selection abortions, which target little girls; backs Obamacare, which forces a 60-year-old woman working behind the counter at McDonald’s to pay for the birth control of a 30-year-old soon-to-be-millionaire graduate of Georgetown Law; and has worked to install regimes in North Africa and the Middle East that subjugate and sexually mutilate women. (WikiLeaks’ Julian Assange, of all people, noted correctly that she “set back women’s rights in the Middle East by hundreds of years.”)

She has served as a role model for certain feminists by riding her estranged husband’s coattails into the halls of power while smearing his sexual-abuse victims as whores, trailer trash, and members of the Vast Rightwing Conspiracy. A self-described “Progressive,” she supported the Iraq War and the bailout of Wall Street millionaires, and she pledged to undo the First Amendment in order to protect herself from criticism. (The pro-First Amendment decision in Citizens United, she said on New Hampshire Primary night, must be overturned; it was, she said, a travesty because it allowed “a right-wing attack on me and my campaign.”)

She has advanced gender equality by proving that a woman in politics can be as corrupt as any man—with the “commodities deal” scheme for laundering payoffs from polluters… the Whitewater deal (selling people real estate they couldn’t afford, repossessing the properties, repeating the process)… the apparent mass collection of information, suitable for use in blackmail, from Republicans’ FBI files… Clinton flunkies’ role in the sale of missile technology to China… the granting of presidential pardons based apparently on political considerations and cash… the Benghazi deception (silencing critics of radical Islam while leading voters in 2012 to believe wrongly that Al Qaeda was “on the run”)… the theft of at least 66,000 government e-mails (and the storage of those e-mails, containing some of our country’s most precious life-or-death secrets, in a way that made them readily available to our country’s enemies)… and the “speaking fees” (ha!) that made Hillary and Bill and Chelsea ultra-rich. In the eight years prior to her presidential run, which included Hilary’s time as secretary of state, the Clintons raked it in at an average of almost $350,000 a week. Politico reported last September: “She earns more for a 20-minute speech to an industry trade group than a dozen fast-food workers make in a year.”

I first wrote about the corrupt activities of Hillary Rodham more than 30 years ago when she chaired the board of the Legal Services Corporation, a government agency that was supposed to provide legal aid to the poor but became instead a source of employment for members of the National Lawyers Guild, an anti-American hate group that was widely and correctly considered the legal arm of the Soviet-controlled Communist Party.

I am resigned to writing about Clinton corruption for years to come, regardless of what happens in this year’s election.