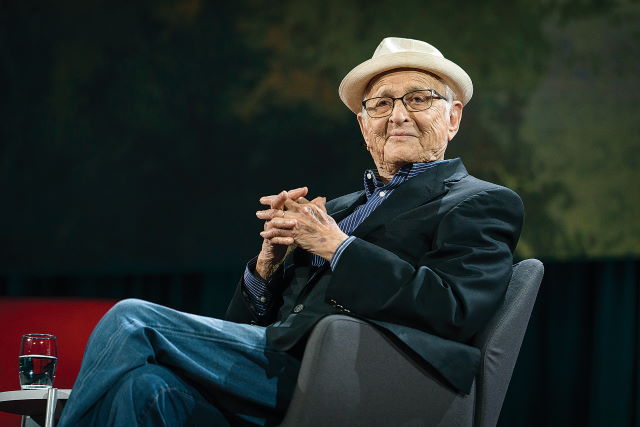 People for the American Way (PFAW) is one of the more infamous Tides spin-offs, conceived in 1981 by television magnate Norman Lear to counter the so-called Religious Right. Credit: TED Conference. License: https://bit.ly/2I2QdZE.
by Hayden Ludwig

While the Tides Foundation actually started incubating new groups in 1979, it spun off its fiscal sponsorship services into the Tides Center in 1996, possibly to insulate the main group from lawsuits against its spinoffs. Since then, it’s spawned many hundreds, possibly thousands of new groups, many of them ideological activist organizations.

Fiscal Sponsorship. Creating a new nonprofit can take months. Fiscal sponsorship offers a way for groups to begin operations well before receiving the prized determination letter from the IRS recognizing their tax-exempt status.

Under fiscal sponsorship the new nonprofit begins operating as part of a surrogate parent such as the Tides Center, usually in exchange for a fee. The Tides Center also offers administrative support, legal consultation, payroll and budget management, and office space until sponsees are ready to leave the nest. In theory, any 501(c)(3) or (501(c)(4) can serve as a fiscal sponsor to another group; however, it’s most common among service-oriented organizations such as Tides, Arabella Advisors, and Donors Trust.

People for the American Way (PFAW) is one of the more infamous Tides spinoffs, conceived in 1981 by television magnate Norman Lear to counter the so-called Religious Right. Eager to begin its anti-Reagan activism, Lear turned to Tides to incubate the fledgling group until the IRS approved its tax exemption eight months later. At that point, its assets were transferred to PFAW (initially called Citizens for Constitutional Concerns).

PFAW is perhaps most famous for leading the campaign to defeat the confirmation of Judge Robert Bork to the U.S. Supreme Court in 1987. PFAW is still on the bleeding edge of left-wing judiciary activism and has been present at nearly every anti-Trump protest covered by CRC in recent years, including the battle to confirm Justice Brett Kavanaugh to the Supreme Court in 2018.

Environmental Media Services (EMS), Environmental Working Group (EWG), and Natural Resources Defense Council (NRDC) are Tides spinoffs and some of the most influential environmental lobbies in the country. EMS (now the Science Communication Network) was founded by Arlie Schardt, communications director for Al Gore’s 2000 presidential campaign. It manages the website RealClimate, which runs pieces by Michael Mann and other environmentalists.

Drummond Pike was a longtime EWG board member, which has been criticized for exaggerating health risks from pesticides and in 1999 published a report falsely alleging a link between autism and vaccines. The NRDC is well-known for its involvement in “sue and settle” cases: lawsuits against the Environmental Protection Agency intended to force the agency to draw up new environmental regulations. It was also a leading agitation group against the construction of the Keystone XL pipeline, which would transport oil from Canada to refineries in Texas.

The three organizations were also involved in promoting the Alar apple scare in the late 1980s. In 1989, Fenton Communications, a major left-wing public relations firm, promoted a campaign on 60 Minutes linking cancer rates in children with Alar, a substance used to prevent apples from rotting. They were joined by the NRDC, EWG, and EMS (which was sharing office space with Fenton), which claimed that “the average pre-schooler’s exposure was estimated to result in a cancer risk 240 times greater than the cancer risk considered acceptable by [the EPA] following a full lifetime of exposure.”

Those reports were further proliferated in the media by Fenton Communications, leading Gerber and Mott’s to halt the use of Alar-treated apples in baby food and juice and statewide bans on the chemical in Maine and Massachusetts. The EPA briefly proposed a ban on the substance in 1989.

To say the fears were overblown doesn’t do it justice. A lab study conducted by the American Council on Science and Health in 1999 showed that a consumer would need to consume over 5,000 gallons juice from Alar-coated apples per day to reach the level of the NRDC’s cancer risk claims. Dr. Richard Adamson, director of the National Cancer Institute’s Division of Cancer Etiology, later said: “The risk of eating an apple treated with Alar is less than the risk of eating a peanut butter sandwich or a well-done hamburger.”

The NRDC still brags about its war on Alar today:

By spring [1989], apple purchases nationwide had dropped by as much as 60 percent, according to some estimates, with growers reporting losses of $100 million. . . . Apple sales remained low through most of 1989, even among apple varieties that weren’t typically exposed to Alar. And as the public grew more discerning of the Alar threat, its view of apples that were regularly treated (like McIntosh and Red Delicious) was tarnished further.

In November 1990, Washington State apple growers—who produced the majority of Red Delicious apples at the time—filed a lawsuit against NRDC and CBS. Despite their best efforts, however, the growers couldn’t prove that the facts in the 60 Minutes broadcast were false, and their claims were dismissed. When the growers appealed, an appellate court countered by citing a lack of evidence that Alar was safe for children.

This was a landmark ruling—a victory for the First Amendment and the freedom of a nonprofit organization to research and report on matters of public health policy. It was a triumph for the public’s right to know and the safety of future generations.

Tides Canada Foundation, the Tides affiliate in Vancouver, is one of the most controversial groups in the nexus. It’s really two separate 501(c)(3)-equivalents: Tides Canada and Tides Canada Initiatives Society, which receives funding from Tides Canada to support its environmental activism.

Tides Canada rose to prominence around 2010 when journalist Vivian Krause revealed that the group had quietly funneled $15 million to 36 Canadian activist groups to protest against construction of oil pipelines from the Alberta tar sands to refineries in Texas—much of which originated with the Tides Foundation in the United States.

The Tides Foundation served as a pass-through for other environmentalist donors, including the Swiss-based Oak Foundation, which moved $700,000 through it to Tides Canada in 2009 “to raise the visibility of the tar sands issue and slow the expansion of tar sands production by stopping new infrastructure development.” (Krause ultimately discovered that some $300 million had flowed from American foundations to Canada’s environmentalist groups between 2000 and 2012.)

In 2019, Tides Canada launched an in-house donor-advised fund (ImpactDAF) to channel more money into left-wing activism, part of a new development in philanthropy called “impact investing.” The minimum to open an account is $1 million; all grants are measured against UN Sustainable Development Goals.

In the next installment, Tides Advocacy’s projects tend to be more radical.