Under New Management: Agenda Off the Rails 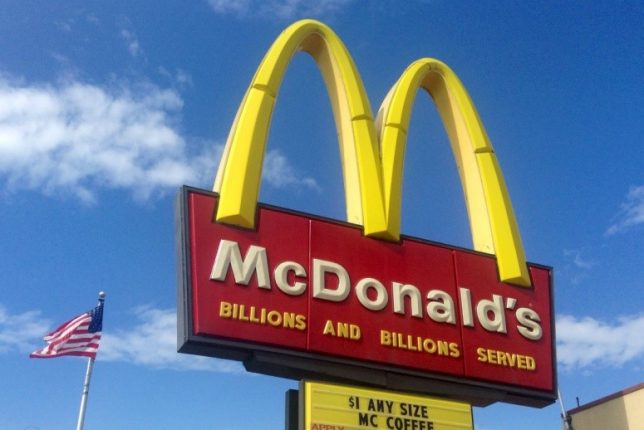 General Counsel Griffin filed charges against McDonald’s USA, the corporate parent of McDonald’s franchises, holding it liable for the labor law actions of its franchises—exactly in accordance with the SEIU’s plan to advance Fight for $15 and contrary to all prior NLRB precedent. Credit: Mike Mozart. License: https://goo.gl/WBxDZP.
by Michael Watson

Summary: The Democratic-controlled NLRB scored record wins – until the 2016 election derailed its agenda. Now the board is under new management, offering opportunity to advance real reform on behalf of America’s employers and working people.

After the failure of the EFCA card-check bill, unions sought to reduce the time from filing a unionization election petition to the holding of that election. Unions believed shortening the campaign period would make it harder for employers to present the negative effects of unionization to workers, making it easier for unions to win.

And so, as part of a Friday news dump in December 2014, Obama’s NLRB handed out another gift to labor, again along party lines. This time, the NLRB issued new representation case procedures known as “quickie” or “ambush” election rules, designed to reduce the time from the filing of an election petition to voting day. By prohibiting the hearing of challenges to bargaining unit size before election day and removing a 25-day minimum time between an election order and a final vote, the NLRB gave unions a leg up in unionization votes—considering that unions can spend an unlimited amount of time presenting their propaganda to employees by various methods before filing for an election.

To make matters worse for worker rights, the NLRB forced employers to hand over long lists of personal contact information to labor organizers, a move intended to assist the dissemination of union propaganda. The dissenters noted: “In sum, the majority’s message to employees in a Board representation election is that ‘the government wants your personal data—and we are going to compel it without your consent—and then we are giving it to someone else, too.’ To say the least, that is not a good message to give the citizenry in 2014.”

For the unions’ purposes, the favor has paid off—though perhaps not as much as they had hoped: In 2016, election campaign periods had fallen 40 percent from pre-2014 levels; union win rates—already in excess of 60 percent in 2014—jumped to 72 percent.

As unionization in the private sector has continued to decline, Big Labor has sought new populations of employees to unionize. The Obama-era NLRB was happy to help clear the way for unionization of new blocs of workers, most prominently graduate student teaching assistants at private universities. In 2016, the NLRB ruled along party lines that graduate students at Columbia University represented by the United Auto Workers union were eligible for unionization. The decision reversed a precedent set in 2004.

The decision reopened a debate that the NLRB had punted in 2015—whether college athletes at private universities were employees subject to unionization. In early 2017 (while Democrats still maintained a majority on the NLRB), then-General Counsel Griffin suggested that they were.

Big Labor’s plans to expand joint-employer liability to franchisors and unionization to college students were rudely derailed in November 2016 with Republican Donald Trump’s election to the Presidency. The new president brings a new majority to the NLRB and a new General Counsel. The Senate’s “Reid Rule,” (instituted when then-Senate Democratic Leader Harry Reid (D-Nevada) welched on his deal to keep the nomination filibuster in place) means that the Senate Republican majority can advance nominations on a party-line vote. This ensures President Trump’s nominees of seats on the Board—at least until the 2018 midterms.

President Trump took office in January 2017 with two vacancies on the NLRB and a 2-1 Democratic majority. Thus configured, the Board continued issuing pro-Big Labor decisions through most of Trump’s first months in office. But by the end of September, Trump had nominated and the Senate had confirmed two new Republican members—a definite sea change for the NLRB.

Marvin Kaplan was nominated to the first Trump-era vacancy, which has a term ending August 27, 2020, in June. Formerly a staffer for House Republicans, Kaplan had been working as counsel at the Occupational Safety and Health Review Commission. His nomination passed on a 50-48 vote; he took his seat on August 10, 2017.

Later in June, the President nominated William Emanuel, a management-side labor lawyer, to serve on the NLRB. His nomination was ultimately confirmed in September on a 49-47 vote. Emanuel took his seat September 27, 2017, giving Republicans the majority on the NLRB for the first time since Sen. Reid blockaded President George W. Bush’s Board nominees in 2006-2007.

By the end of September, Trump had nominated and the Senate had confirmed two new Republican members—a definite sea change for the NLRB.

Kaplan and Emanuel will be joined by a third new Republican member sometime after current NLRB Chair Phillip Miscimarra steps aside at the end of his term in mid-December. The Washington Examiner and Bloomberg BNA have reported that President Trump is considering John Ring, another management-side labor lawyer, to fill the seat Miscimarra will vacate.

In the final installment of “Under New Management,” we see how the collapse of the Obama administration’s “Card Check Bill” offers President Trump’s NLRB an opportunity to advance labor reform on behalf of America’s employers and working people.