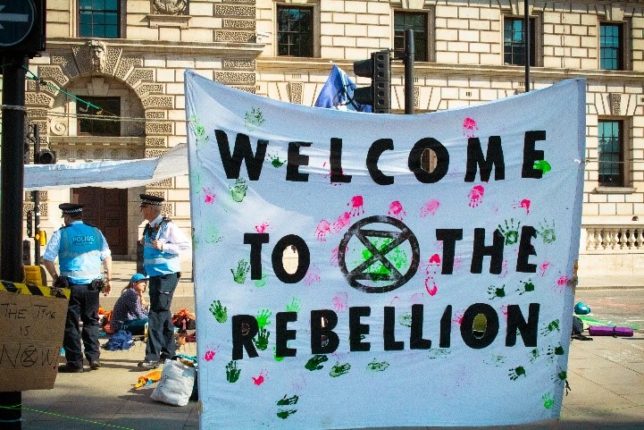 XR is asking nearly everyone on Earth to surrender most of their prosperity and security and is proving it through disruptions and destructions caused specifically to drain away our time, money, and patience. Their blueprint is to inundate governments with escalating and more costly vandalism until they surrender. Credit: Alexander Savin. License: https://bit.ly/2Ztm9tr.
by Ken Braun

Extinction Rebellion’s blueprint is to inundate governments with escalating and more costly vandalism until they surrender. No sovereign state in the industrial west, and certainly not the American government, would idly tolerate this behavior if it were inflicted on their cities by a foreign adversary. To the degree XR succeeds, the damage they’re inflicting will increase the need—and the public demand—to respond to them with more coercive measures.

This has already begun to happen. In June 2019 XR tried to do to Paris what it did to London in April. No strangers to public unrest, the Paris police responded with riot shields, pepper spray, and swiftly ejected at least 90 (perhaps as many as 200) people who were trying to block one of the city’s bridges. The French interior ministry matter-of-factly defended the police behavior (which included pepper spraying the faces of some participants) as “necessary to restore traffic circulation.” And in a snarky rebuttal to XR’s strategy of clogging justice systems, not a single arrest was needed.

While the London disruption was taking place in April, NBC-TV4 in New York City reported an Extinction Rebellion mob of 300 “swarmed” the Big Apple’s city hall, tried to block streets, and hung a banner on the Brooklyn Bridge. In this case, the “they can’t arrest us all” game plan failed to account for the reaction speed and jail cell capacity of the American criminal justice system. The NYPD “moved in quickly” and shut down the XR circus by rounding up and arresting one-third of them.

Even in London the so-called “Summer Uprising” scheduled for several U.K. cities in July appears to have gone off as far less of a disturbance than the April event or even the November 2018 smaller practice run before it.

A February 2019 manifesto on the Facebook page of XR’s host organization begins as follows: “A Rebellion does not ask permission from the police; it understands that the police are a fascist organisation who are enforcing a racist, patriarchal neoliberal system.”

Even during their successful takeover of London streets for nearly two weeks in April, smashing windows and interfering with the flights of passenger airliners were already ideas sketched within Extinction Rebellion’s “escalation strategy” playbook. So, if vandalism and worse were being contemplated when the street blockades were working, then what tactics might XR consider if proactive policing continues to keep the streets clear?

The Unabomber wasn’t behaving as a violent man when he began his crusade against industrial capitalism. First, in the early 70s, Kaczynski moved to a remote cabin in the Montana wilderness, planning to live peacefully cut off from the modernity he detested. But he found he couldn’t run from the future—it literally put a road through his favorite patch of wilderness. So, he began acts of petty local sabotage, such as vandalizing vacation homes, snowmobiles and logging equipment—like Extinction Rebellion, he had his own “windows” to smash.

Some of it worked, for a bit—he told an interviewer the snowmobiles ceased running near his neck of the woods. But eventually the market-driven, technological world kept coming, and even the more aggressive stuff (i.e., killing a neighbor’s dogs and booby-trapping a motorcycle trail) didn’t fend it off. From there, it was on to putting a bomb on a passenger airliner, and eventually the bombing deaths of three faraway symbols of industrial capitalism: a timber industry lobbyist, a computer store owner, and an advertising executive.

“We are going to force the governments to act,” said Roger Hallam, back when Extinction Rebellion’s street shutdowns were working. “And if they don’t we will bring them down…”

What happens when the would-be world revolutionaries conclude no tactic so peaceful as Rosa Parks defiantly taking her place on a city bus will succeed? Or that the police they’ve branded as “fascist” won’t allow them to create the “large-scale economic disruption” central to their strategy? Or that breaking even more windows or flying drones to shut down airports doesn’t get the job done either?

The Unabomber and Extinction Rebellion share a similar ideology aimed at shutting down and reversing the effects of industrial capitalism. The fundamental difference between them is that in his crusade for the cause Kaczynski slowly graduated from non-violent vandalism to overt terrorism—and eventually murder.

The most important difference may yet turn out to be that Ted simply has the benefit of more battlefield experience. He literally spent years in the wilderness finding out that what Extinction Rebellion is doing today will not work, and that he needed to deploy an “escalation strategy.”