Unabombers Without Bombs: The Plot to Shut Down Capitalism 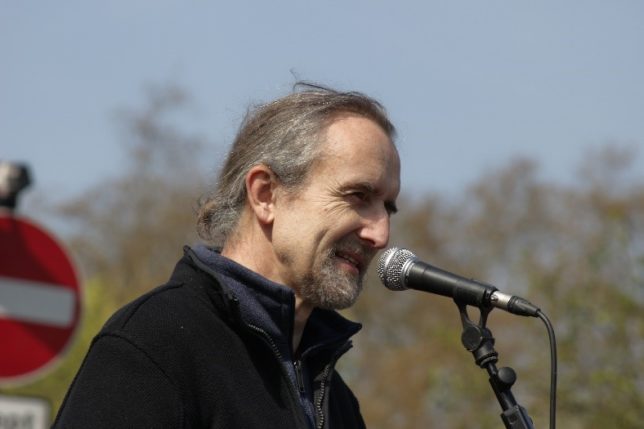 Roger Hallam was described by the Guardian as an “academic from King’s College” whose specialty is “social change and protest.” The Times of London has portrayed him as a “former organic farmer, who claims that extreme weather destroyed his business a decade ago.” Credit: Steve Eason. License: https://bit.ly/2ZnvrvB.
by Ken Braun

Speaking to media in November 2018, Bradbrook warned the end was near: “we are at severe risk of food supplies collapsing in the next few years, and of societal collapse.”

This rhetoric—along with their overt hostility to the global market economy—is obviously not aimed at winning over politically-moderate nature lovers who might toss spare dollars in the direction of preserving a wildlife habitat. Instead it’s an alter call from a millennialist cult looking for converts willing to push out the acceptable frontiers of the far left.

One of Extinction Rebellion’s first public disruptions was, oddly enough, an uninvited takeover of the London offices of Greenpeace. “Occupiers call on Greenpeace to show leadership in tackling the real and present threats of the ecological crisis,” stated XR’s news release, which also said Greenpeace needed to “up their game.”

Greenpeace opposes the use of oil, gas, coal, and even zero-carbon nuclear energy—collectively that’s almost all (89.1 percent) of the fuel used to run the world’s economy. Greenpeace also opposes advances in agricultural technology that help feed the world. And they’re infamous for using illegal methods to attain their policy objectives. In 2015 Greenpeace activists illegally boarded and occupied an offshore oil drilling rig owned by Shell, proclaiming it a “platform for people power.” And in 2011 Greenpeace vandals in Australia destroyed a crop of wheat that had been genetically modified to boost nutritional value and increase bowel health.

It’s difficult to imagine how much more radical and obnoxious Greenpeace must become in order to “up their game.” But it’s crystal clear that Extinction Rebellion intends to become and remain the global standard for disruptive troublemaking on the capitalism-hating, far-left fringe.

As such, it should come as no surprise that XR’s brand of supposed “non-violence” explicitly allows for malicious property destruction. According to the website: “We have resorted to breaking windows in a couple of campaigns, this is called an “escalation strategy” and it is necessary to create the drama to focus attention on an issue.” They even sent out a news release boasting of smashing the glass entry doors of the Shell oil company headquarters during the April 2019 disruptions.

The mass shutdown of a major city implicitly endangers lives and public order. When those 10,000 London police were tied down dealing with a left-wing mob, they were not available to counter other threats to public safety. Jammed and snarled traffic will impede ambulances and private vehicles rushing to and from hospitals for medical emergencies. Needless harm and worse will be the inevitable result. This is “non-violence” only until somebody gets hurt or killed.

The XR “escalation strategy” also allows for threatening passenger airliners. For the summer of 2019 Extinction Rebellion had planned to fly toy drones within the airspace of Britain’s Heathrow Airport, aiming to ground air travel. Law enforcement officials responded to this suggestion with a predictably severe lack of good cheer, saying “a drone has the potential to cause great harm” to airplanes and that “endangering the safety of an aircraft can result in a life sentence.”

Hallam reportedly instigated the proposal for the drone attacks on the airport, according to The Times of London, and Bradbrook seemed to eagerly endorse the idea as well, saying “They’ve said ok there’s this exclusion zone around Heathrow where you can’t fly drones and we’ve gone oh that’s interesting because what we’re about is breaking the rules.”

The drone plot was opposed by cooler heads within Extinction Rebellion who believed targeting airliners was putting the organization’s non-violent reputation in jeopardy. Eventually XR officially shelved the drone plot, but perhaps only temporarily, as they issued a statement that the airport remained part of the group’s “strategic planning.” This stand-down order did not prevent a lone XR protester from running onto the runway during a U.K. airshow in July, disrupting the event for at least 20 minutes while authorities chased him down and arrested him.

The cavalier attitude toward destructive and dangerous stunts exposes the lie to Extinction Rebellion’s claim to be replicating the non-violent tactics used by American civil rights pioneers, Gandhi, and others. It also suggests an ominous answer to the obvious question about how far they will go with the “escalation strategy.”

When Rosa Parks refused to surrender her bus seat, she wasn’t seeking to smash industrial capitalism, but instead to participate equally within it. The tactics she used neither damaged the bus nor impeded anyone’s use of it. She threatened nothing except white America’s racial hypocrisy. To succeed, she didn’t need an “escalation strategy” that embraced property destruction, the deliberate exhaustion of public safety to its breaking point, or threats against passenger airliners.

Hallam, Bradbrook, and Extinction Rebellion cannot claim to be descended from this legacy because a purely non-violent role model cannot work for them. XR is asking nearly everyone on Earth to surrender most of their prosperity and security and is proving it through disruptions and destructions caused specifically to drain away our time, money, and patience.

In the conclusion of Unabombers Without Bombs, learn about some of Extinction Rebellion’s most outrageous demonstrations.